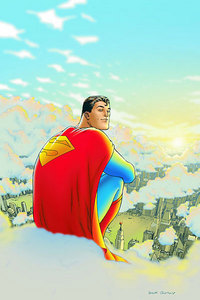 Superman is the Adam at the root of the superhero family tree—there’s a reason superheroes are called superheroes, after all—and as such, he’s been adapted, reinvented and reinterpreted more times than any other comic book character in history.

He’s starred in every medium imaginable, from radio, to TV, to film; from silver screen animation to small screen animation to Internet credit card ads co-starring Jerry Seinfeld. There are novels written about him and inspired by him; he has his own flavor of ice cream, and is mentioned in more song lyrics than any other fictional character.

In one sense, it always seems like Superman is everywhere all the time—like Jesus, Mickey Mouse and Dracula, you don’t have to look hard to see him somewhere. These days though, with his first feature film since X-Men ushered in the latest boom of superhero movies, he really is literally everywhere. A trip to the grocery store or mall will guarantee you see the red and blue, spit-curl-rocking figure staring back at you everywhere you look.

After all, the guys been in comic books as long as there have been comic books, and there are literally thousands of Superman comics filling up book stores and comic shops, from hundreds of different writers and artists. How’s a fan of the new film who wants to read great Superman comics supposed to know where to start?

Funny I should ask. In an effort to help separate the super-wheat from the super-chaff, here in no particular order are some of the greatest Superman stories ever told.

These were written by writers who hardly stopped to think about realism and logic (let alone do research) because, honestly, they’d rather be doing anything else, and they were writing not for obsessive compulsive adults, but kids with dimes to waste at the newsstand.

The results were a weird kind of stream-of-conscious, almost automatic writing; sci-fi tall tales that seem so bizarre and surreal when read in the early 21st century that they become almost avant garde.

This is the version of Superman of the George Reeves TV show, and the one most people are familiar with: The one built like a tree-trunk, the one Lois Lane kept trying to trick into marrying her, and the one stuck in a strange love triangle with his own secret identity.


WHATEVER HAPPENED TO THE MAN OF TOMORROW?

In the late ‘80s, DC prepared their most ambitious reinvention of their fictional universe and it’s 50-year-old timeline, essentially rebooting Superman’s story and starting over from scratch. This gave the company the unique opportunity to tell the “last” Superman story, closing out the character’s first half-century worth of history to start all over.

The writer they turned to was a kid named Alan Moore, who had just started his revolutionary work on Swamp Thing and Watchmen, which would soon come to be regarded as the greatest comic book ever written (and Moore the medium’s greatest writer).

In this epic story, Moore exposed Superman as Clark Kent to the world, necessitating him to move his friends to the safety of the Fortress of Solitude, just as all of his villains, suddenly turned darkly murderous, lay siege to it. It’s Superman’s last stand, and Moore reinvents virtually every element of the mythology while laying waste to it in a sort of Super-Ragnarok.

The long out-of-print story was recently included in DC Universe: The Stories of Alan Moore, a collection of Moore’s DC work, which also includes the hard to find “For the Man who has Everything,” in which Wonder Woman and Batman try to celebrate Superman’s birthday, and a meeting between Superman and Swamp Thing.

Moore still hadn’t said everything he had to stay about Superman, of course, and he would later pen two graphic novels worth of stories about “Supreme,” a thinly-veiled Superman analogue, both also well worth reading.

This 2004 graphic novel is what they used to call “an imaginary story” back in the Silver Age; one that didn’t star the official Superman, and thus didn’t really “count.”

In it, writer Kurt Busiek introduces us to the dark-haired, blue-eyed son of David and Laura Kent of a small town in Kansas. They, of course, name him Clark, and he spends his childhood being made fun of for being named after the fictional Superman.

And then one day he discovers that, like his fictional namesake, he can fly. Helped tremendously by the photorealistic art of Stuart Immonen, Secret Identity is probably the most realistic Superman story ever told, as it’s set in the real world and tries to answer questions like what would happen if there really was a Superman in our world, and what we’d do to him.

The Superman Adventures series of the late ‘90s was a strange animal, being a comic book based on a cartoon (the Bruce Timm-produced Superman: The Animated Series) that was based on a comic book.

Such comics are rarely any good for much more than introducing kids to comics, but this particular one was an exception, as it was written for a time by Mark Millar.

At the time, it was about the best regular writing gig he could get, but Millar would go on to write The Authority, Ultimate X-Men, Wanted and The Ultimates, one of the best superhero comics of all time.

Capitalizing on Millar’s later popularity, DC began releasing trade digest collections of Millar’s run on the series, and it’s pretty astounding stuff—though produced for the kiddies, it was head and shoulders above most of what was being written in the “real” Superman comics at the time.

Short, usually just-one-issue-long stories would constantly find new angles to Superman’s well-explored world and new takes on one of the most written about characters ever.

Of special note is “This is a Job For Superman,” in which a little boy “prays” to Superman to help him find his lost dog, as we see a very busy night in the life of an omnipotent hero.

The Millar run on the series has been collected into four volumes so far. Millar would later take another crack at the Man of Steel in graphic novel Superman: Red Son, an intense “imaginary story” which posits a world where the rocket that brought infant Superman to earth landed in the Soviet Union, he was befriended by Stalin and ended up fighting for truth, justice and the way of America’s rival superpower.

Comic book writer Steven T. Seagle was offered most comic book writers’ dream job when his editor asked him to write the monthly Superman comic book, but Seagle didn’t quite see it that way—he could never really wrap his head around the character, and associated him with a painful childhood memory.

He eventually took the assignment, churning out about a year’s worth of mediocre stories. And, one year later, this beautiful graphic novel, a semi-autobiographical story about a comic book writer named Steven T. Seagle who was just offered the monthly Superman comic book while his whole life is falling apart around him.

Seagle is struggling with a dark family secret, a fatal, incurable genetic disease that has strained his relationship with his parents and is now straining it with his lover, as he’s afraid to risk condemning a child to possibly suffering from it.

It’s painted by Teddy Krstiansen in a heartbreaking storybook illustration style, though Kristiansen employs dozens of various styles and tones when he and Seagle get side-tracked into visual essays about an element of Superman, and how the fictional superhero relates to the real world.

Recognizing that the extremely complicated back story of the monthly Superman comics (an inevitable byproduct in any serial medium) could be so daunting as to scare some potential readers away, DC launched new series All-Star Superman late last year.

The idea was to get fresh, new reader-friendly takes on the Superman franchise; a more or less filmic approach that would turn out comics that read like little paper blockbusters.

Visionary writer Grant Morrison and artist Frank Quitely were able to tell the first Superman story to successfully blend the spirit of the character’s early Silver Age adventures, written primarily for kids, with the level of realism and quality expected by today’s adult audiences, picking up on some elements that worked well in Superman’s previous TV and film incarnations.

Only three issues of the bi-monthly series have been released so far (it takes Quitely a while to draw that well), and each has told a dense, imaginative, compelling story that seems to synthesize the strengths of all the previous Superman stories, while excising all the weaknesses.
Posted by Caleb at 12:42 PM

I'm well aware this post is over a year old, but it's a travesty that "Superman: For All Seasons" wasn't on your list!