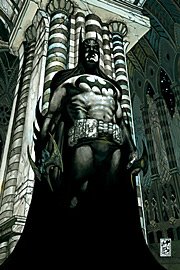 52 #5 (DC Comics) Many of the missing heroes who fought on the outer space front of the “Crisis” have returned, but are in extremely bad shape thanks to a teleportation accident. Strong parallels to the Iraq War are evident, as Green Lantern tells Animal Man’s wife that it doesn’t look like he’ll be coming home, Dr. John Henry Irons and Dr. Pieter Cross examine the wounded at what is essentially a field hospital for wounded superheroes, and we see three M.I.A. heroes marooned on a mysterious planet. A colleague from Best Shots @ Newsarma.com recently referred to 52 as a superhero Lost, and I’m hard pressed to think of a better way to describe it.

Civil War: Front Line #1 (Marvel Comics) This new series by writer Paul Jenkins, one of the more brilliant writers in Marvel’s creator stable, is intended to focus on “street level” stories involving the war between all of the heroes in the Marvel Universe. The leads are Ben Urich, newsman for the New York Post-like Daily Bugle, and Sally, a writer for the Village Voice-like The Alternative, and we meet them as they begin navigating a political and media climate radically altered by an accident that is for all intents and purposes the superhero version of 9/11. If Mark Millar has been somewhat coy when drawing parallels between the Marvel Universe’s politics and those of our own in the main Civil War title, Jenkins is nothing short of blatant. If you disagree with his criticisms of our media and politicians, the first issue may leave a bad taste in your mouth, but I don’t, so it doesn’t. It’s quite a busy issue, actually, as Spider-Man drops by Sally’s apartment to offer her an interview, Iron Man comes out and reveals his secret identity to the world, Speedball if found and arrested by S.H.I.E.L.D., and artist Kei Kobayashi offers a beautifully illustrated allusion story about one of America’s most infamous abuses of its citizens' civil rights. Whew! That’s a lot of comics for $2.99.

Detective Comics #820(DC) Simone Bianchi’s cover is so beautiful that, if it were a woman, I’d marry it and spend the rest of my life trying to make it as happy as it could possibly be. The story inside, part seven of an eight-part arc by Starman scribe James Robinson, isn’t anything terribly special, and is mainly focused on revealing a new status quo for Batman and company, but Robinson’s run of the mill is head and shoulders above a lot of other writers’ run of the mill.

JSA #86 (DC) Man, what happened to Rags Morales? He was supposed to be providing pencils for this story arc, but here we are on the fourth issue of a five-issue story, and Jerry Ordway is filling in for Morales already. Kind of sad, considering Morales wasn’t even drawing the entire 22-pages of pencil art for theses issues; almost half of each issue has been devoted to flashbacks drawn by Luke Ross. Ordway’s a fine artist, of course, but the story has lost a lot of momentum, and is now missing its main selling point was Morales’ art.

Justice League Unlimited #22 (DC) Page 17, panel three: The worst single panel of art in the usually reliable Rick Burchett’s career? I think so. Otherwise, this made-for-kids comic based on the now-cancelled cartoon of the same name continues to offer fun, easy-to-digest superhero adventures. As someone older than the intended audience, I sometimes can’t help but by it based simply on the wonderful collection of DC superheroes it lines up for cameos—It’s not often you see Aztek, The Atom, Atom Smasher and Captain Atom all sharing the same panel...and that’s just the “A”’s!

U.T.F. #1 (Ape Entertainment) The title is an acronym for Undead Task Force, which should pretty much be enough to tell you whether or not this is a book for you. The U.T.F. is a secretive organization charged with busting undead heads, made up entirely of good-looking people who wear big black coats over skintight black unitards. We meet them cleansing a graveyard of a zombie infestation, just before they’re called to L.A. to deal with a prison riot. A vampire prison riot. Most of the dialogue was pretty wince-inducing, and the genre’s a pretty tired one, but the great thing about genre entertainment of any kind is even when it’s mediocre, it’s still usually readable…at least to fans of the genre.

Wonder Woman #1 (DC) Wonder Woman and her now grown former sidekick Donna “Formerly Known As Wonder Girl” Troy tend to take it in the teeth every time DC editorial messes with their fictional timeline, as they so recently did with Infinite Crisis. This is a Wonder Woman’s first appearance in over a year of DCU time and, so far at least, this relaunch hasn’t been quite as confusing as it could have been. In fact, writer Allan Heinberg (Yes, of The O.C., but also of Young Avengers delivers a fairly action-packed first issue that reintroduces and reimagines a trio of Wonder Woman villains, introduces us to two candidates for the mantle of Wonder Woman (fill-in Donna Troy and “Agent Diana Prince”), Wondy’s traditional male damsel in distress Steve Trevor and an obscure DC character with a new lease on life. There’s still a lot to be resolved in terms of how exactly Wonder Woman fits into the greater fabric of the fictional universe (as her last 20 years’ worth of stories were apparently all moved backwards in time, and the status of her mother, the JSA’s Wonder Woman is unresolved), but so far Heinberg is playing those questions as rather intriguing mysteries. The character has had some incredible artists on her books in the past—particularly George Perez and Phil Jimenez—but I can’t remember it ever looking slicker or better designed than it is right now. Terry Dodson handles pencils while Rachel Dodson iprovides nks and Alex Sinclair colors. The Dodsons have redesigned Wonder Woman’s costume to make it more armor-like and add a neat little lasso holder (I always wondered how it stayed attached to her hip), and redesigned her villains as well (though Dr. Psycho looks pretty lame). The book even sports a new logo, which DC’s so proud of they give it’s designer a credit for. Nancy Ogami deserves it—It is a nice logo.
Posted by Caleb at 7:43 PM