Comics Controversy Calvaclade Update: Quesada on that statuette and that cover

Props to Newsarma.com's Matt Brady asking Marvel Editor-in-Chief Joe Quesada about the two biggest Marvel stories of the past two weeks. You'll have to slog through some goofy Marvel hypsterism to get there, but after their weird-o online video show (I'm just glad they didn't call it In Da House), Brady asks Quesada about Comiquette-gate and Heroes For Hentai-gate.

Regarding Comiquette-gate, Quesada quite diplomatically responds,


When fans saw the statue was exactly the same time I was made aware of it, I have no involvement in that stuff and haven't kept up with the brouhaha. It kind of floors me in a way because Adam Hughes is brilliant and is known for his amazingly sexy portrayal of strong women, so I'm not quite sure what people are up in arms about? Seriously, fill me in because I've literally been out of town and out of the loop.


He's right on the fact that Hughes is generally one of the last artist one would expect to cause this sort of reaction. Sure, he draws sexy super-women exploding out of their costumes pretty much exclusively these days, but he draws them the way real women actually look. He's a great artist, who knows anatomy, lighting, design and drapery. He certainly doesn't belong in the same category as Michael Turner and Greg Land, who I'm frankly shocked that both Marvel and DC continue to give money.

Hughes didn't do himself any favors in his Newsarama interview about the statue, but anyway you look at it, this is a nice piece of art: 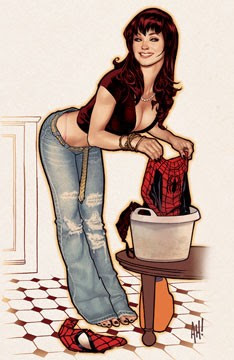 And it's not really Hughes’ fault that the sculptors drained all of the humanity, sexiness and spirit out of his design. But then, that's what happens when you're making a plastic statuette based on a drawing. 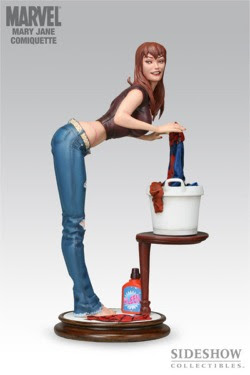 I was incredibly disappointed (and, frankly, extremely shocked) to hear Quesada's response to the Heroes For Hire cover, however:


First, I think people are reading way too much into that cover than was ever intended. I heard terms such as "tentacle rape" being thrown around when that in no way is what's happening, nor does it happen in the book. Those tentacles are the arms of the Brood who appears in the issue and is a major story point, the Brood have tentacles, sorry about that.

Secondly, the concept for that cover, soup to nuts came from a female artist. Thirdly, not being a deep follower of manga, I have no idea what recurring theme people are referring to or concerned with. While I appreciate the sentiment and the feelings that some may have about this, I honestly feel that there is way too much being read into this cover.

Also, HFH is a book that features two strong, lead female protagonist who kick major ass; somehow folks have forgotten to focus on that.


I've actually already heard all of these arguments torn apart in the same posts in which people originally began reacting to the cover image. No, it's not technically a picture of women being raped by tentacles, and yes, we're not all retarded, we can see that's not what's actually happening on the cover...it's what's about to happen.

Whether that scene as depicted occurs within the book or not is irrelevant to the discussion of whether the cover itself is reprehensible, particularly on a Marvel superhero comic book. Although, if nothing like it occurs in the book, why on Earth is it on the cover at all?

Quesada points out that the image came from a female artist. Um, so what? That doesn't make it any less repulsive an image, nor does it exempt Marvel from getting to share in the criticism of it. Are we to believe they were just like, "Hey, give us an image of the Heroes For Hire team fighting the Brood," got this
back, and were like, "Awesome! Let’s just slap this on the cover now, okay?”

They didn't see any sketches first, or talk to the artist in detail about what they wanted? And they have no power to reject an image, or ask for alterations to it? How hard would it be, with the powers of computers, to at least clean that up a bit? (They were certainly able to alter the image of Peter Parkers genitals that slipped into Reign or the nip slip in Iron Man once they were discovered/noticed, without having to have someone redraw an entire page).

Quesada acts like Marvel is completely powerless over what their cover artists do, and have no choice but to run what a freelancer turns in. Why do I get the feeling that if Misty Knight was smoking a cigarette in that image, it would have gotten rejected? (It may be worth noting that Marvel voluntarily rates it’s comic books, betraying a belief, as the smoking ban and the confused comments about gay title heroes did previously, that Marvel believes there are kids who might be reading their books. HFH is rated “T+,” which I assume meant is for older teens, but their site says actually means is for “9+ years old [readers]… Appropriate for most readers, parents are advised they may want to read before or with younger children.” So, that cover is cool for a ten-year-old to look at? Because I wouldn’t even look at it at work).

Quesada’s comment on the fact that HFH has " two strong, lead female protagonist [sic] who kick major ass" is also weird. That's part of the problem, as has been pointed out by Tamora Pierce, who has written for Marvel:


It's not right that we have these powerful women. Let's humiliate them publicly, on the cover. Let's strip them of their power, wit, and rage, and show them off to everyone who walks by, to show what powerful women can expect, even when we've showed them being powerful. This is what happens when women strut along, kicking butt. This is what they can expect. Savor and learn!


Beyond the fact that Quesada doesn't see a problem with the cover (A state of affairs I had imagined and found perhaps just as bad if not worse than an intentional use of the imagery to stoke it's most negative and perversely sexual connotations), I was surprised to hear him say publicly that he's not a "deep follower" of manga.

Um, should you really be the Editor-in-Chief of one of the biggest American comic book publishers and not be "deep into" the most rapid-growing and widely-read type of sequential art storytelling? Admittedly, it does explain why Marvel's dozen or so attempts to attract the manga audience have all fallen flat (with a few vestiges of such initiatives seemingly succeeding despite Marvel's efforts, like Runaways surviving the doomed "Tsunami" line or Spider-Man Loves Mary Jane lasting as long as it has and racking up rave reviews), but, Jesus, if I was Quesada I'd have copies of Fruits Basket and Naruto under microscopes in a big Marvel lab somewhere, with Marvel staff scientists studying the things around the clock and I'd be calling once a day to ask if they've managed to identify and reverse engineer whatever it is that makes kids love those things so much.

I hate to sound all doom-y and gloom-y here, but I'm 30; I'm going to be dead in 50-60 years (if I'm lucky), along with just about everyone else who reads Marvel Comics. The comic book consumers who are going to replace me are currently a bunch of little kids and teenagers who read manga.

I thought that was common knowledge, but I guess not.

As depressing as Quesada's response to the HFH controversy, it's nowhere near as depressing as reading the comments Newsarama.com posters left in response. Read them at your own peril.
Posted by Caleb at 6:57 PM

Labels: a great disturbance in the blogosphere, heroes for hire, quesada, women-in-refrigerator-ism

Oh yeah. It's a real nice drawing, and I'm pretty sure my Spider-Man underoos looked almost exactly like that. Although, I didn't fill 'em out quite as well as Pete does.

Not only did you take Joe to task for his feigned ignorance, you also got the attention of LITG. Solid work, Caleb. Nice one, sir.