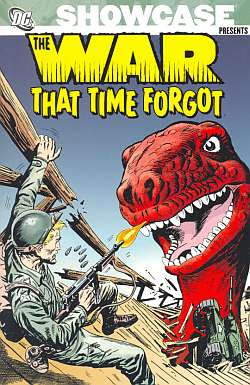 Lasvegasweekly.com has a brand new website, with a new look and lots of new features, so be sure to click around to see if you see anything new you like should you decide to stop by to read this week's comics column, which covers Showcase Presents: The War That Time Forgot Vol. 1 and First In Space.

I can't recommend the former strongly enough; as soon as I got done wading through it, I totally wanted to re-read DC: The New Frontier and even the Birds of Prey arc set on Dinosaur Island. And man, what I wouldn't do for a trade collection of Guns of the Dragon, the pulp-tastic Tim Truman four-parter pitting Bat Lash, Enemy Ace, Biff Bradley and Vandal Savage against against the monsters of Dinosaur Ssland (I've only been able to find the first and fouth issues in back-issue bins so far).

The latter's not too shabby either, although it's certainly lacking in the dinosaurs vs. army guys department.

In other linkblogging, you may have heard about Johanna Draper Carlson's "superheroes aren't for girls" post, which has sparked a lot of...reaction. I go to comicsworthreading.com at least once a day, and Carlson is a very smart cookie whom I quite often find myself agreeing with, but in this case I don't think I do (although what she said deserves a bit more thinking about than some of those jumping down her throat have seemingly given it before posting their responses).

To add my two-cents (and with as many folks offering their two-cents as have thus far, Carlson probably has enough to make a downpayment on a nice new car, I'd imagine), I think it's important to remember that superheroes are a genre and superhero comics are a genre of a medium (clearly it wasn't just dudes seeing Spider-Man 3 last week), and the news that girls who dig on mainstream superhero comics are aberrations does indeed seem like common sense.

But then, at the same time, Carlson talks about superhero comics daily on her blog, and I can think of at least three regular stops on my daily blog-reading that are sites written by women who discuss superhero comics pretty much exclusively. And yeah, I'm male and read a lot of superhero comics (as this site so readily attests), but I also read a lot of manga that is unquestionably written for little girls (Kilala Princess, Tokyo Mew Mew and Magic Knight Rayearth come most immediately to mind). And I can't tell you how excited I am about DC's Minx line which, whatever criticisms can be directed at it, is quite clearly intended for and being marketed for girls and young women and not, you know, 30-year-old dudes.

What's the point of this? I don't know exactly. I don't know any men who read romance novels, but I know a lot of men who read girls comics (That's the very definition of shoujo, isn't it? Girls comics?). And plenty of girls who read superhero cimics (well, know of them, via the Internet, I guess), and when talking about comics, it seems like a comic-to-comic comparison makes more sense than a comics-to-prose or comics-to-film comparison. (Not that what I know really matters, though; part of what Carlson was alluding to was a tendency for individuals to consider themselves the ideal market for any and everything they like. I just offer this as an anecdote pointing out exceptions).

Of all the responses to Carlson's original post I've read today, I think Tom Spurgeon gave one of the savviest and most measured responses, in which he pointed out that part of the discussions regarding particular audiences for particular genres seems to emnate from the mistake of thinking of superhero comics to mean all comics:


"In other words, when I was 10, my idea of an artistic achievement in comics and the best Spider-Man comic ever was the same: maybe Peter Parker could go on a journalistic assignment in a foreign land and leave his costume at home. When I got older I figured out I'd rather read Joe Sacco on the journalistic assignment and that Peter Parker was better off spending two pages at the Coffee Bean and 22 pages punching Green Goblin in the head."

But, that said, how awesome would it be if Peter Parker did visit the Middle East to create a piece of autobio journalism told in graphic novel form, and Joe Sacco flirted with MJ and Gwen at the Coffee Bean and fought the Green Goblin?

Quick, Quesada! Get Sacco on the horn and see if he's up for What If...Joe Sacco Was Bitten by the Radioactive Spider Instead of Peter Parker?


Finally, to return to the subject of linking to my own stories, if you like zombies, if you loved 28 Days Later, but you're highly skeptical about this weekend's 28 Weeks Later, don't worry, you need not be so skeptical. It's actually quite good.
Posted by Caleb at 8:28 PM

Nothing against your whole argument, since I'm not sure what to make of the issue myself, but I must take issue with this:

"But, that said, how awesome would it be if Peter Parker did visit Palestine to create a piece of autobio journalism told in graphic novel form, and Joe Sacco flirted with MJ and Gwen at the Coffee Bean and fought the Green Goblin?"

You know that Palestine doesn't actually exist as a country yet, right? Tread carefully.

Can you elaborate on this?

Sometimes I think I'd like to see comics compared to other media. Perhaps we should compare them as stories or genres. I wonder why we get so hung up on the medium.

I can't figure out why we'd be fans of a medium rather than following types of stories we like.

Did that make any sense? It's a very embryonic thought at this point.

Yeah, maybe I shoulda wrote "Palestinian territories"...or "the Middle East"...or, actually, "Bosnia," and avoided the whole thing, since that's the setting of Sacco's other big work of autobio journalism in graphic novel form.

Yes, there's no internationally recognized country as Palestine. Whether it exists or not probably depends on who you ask, although it's a whole murkier issue than even if it should exist, which is murky enough already.

I used the word simply because that's what Sacco entitled his graphic novel, Palestine.

Since it was an arbitrary choice on my part, I should probably edit it...I'll wait till I have my morning coffee though, as I'm barely in any shape to contemplate superheroes at this point, let alone geopolticis.

Good point. Carlson's post compared superhero comics to romance novels. The former is for boys, the latter is for girls. She's certainly right talking demographics, but it seems weird to me to talk about gender and genre across media like that.

I'm a fan of the medium (rather than a type of genre) because...well damn, that is a tough question, isn't it. I just like the fusion of drawn art and prose in the service of a story, I like the film-like storytelling of comics fused wit the book-likeness consumption experience of comics.

Personally, I think I do folow certain genres from media to media--I like high school melodramedies, wheter it's manga, 90210 or She's All That, and superhero stories, whether it's in comics, Spider-Man and His Amazing Friends or Spider-Man movies. (But maybe then it's the characters?)

Damn, a lot to think about in this thread!

Switching over to another issue you raised--women or girls reading superhero comics. While student teaching in a 4th grade classroom I noticed a good percentage of girls interested in superhero collections I brought in. One 10 year old was totally into Ghost Rider and Silver Surfer. I think the movies may be leading young girls to superheroes. The question then becomes, will the comics that young girls get their hands on, increase or decrease their interest in superhero comic books?