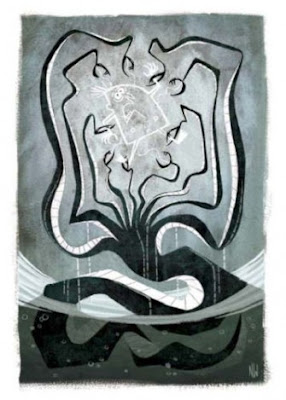 (Confidential to Chris Pitzer and Nate Wragg: I’d totally buy a floppy comic book starring Pathetos and/or one chronicling he war between Yeti and Sasquatch.)


And while I’m posting links…


—Hey, I know! Let’s talk more about that Heroes For Hire cover, huh?

In this week’s belated Lying in the Gutters column, Rich Johnston dipped deep into his nerd knowledge to point out something I don’t think I’ve heard anyone mention…not the dumb-ass Marvel fans who don’t see what the problem is or Quesada himself, who was sure to promise that no actual rape occurred in the book or was being alluded to in the cover image:


Joe Quesada, on Friday, amply justified it by saying "First, I think people are reading way too much into that cover than was ever intended. I heard terms such as 'tentacle rape' being thrown around when that in no way is what's happening, nor does it happen in the book. Those tentacles are the arms of the Brood who appears in the issue and is a major story point, the Brood have tentacles, sorry about that."

You can read the rest in the interview, but as I recall, the tentacles of the Brood, along with their stingers, are used to implant other races with their eggs, their stolen-from-Alien method of reproduction. The eggs then hatch and take over the host organism. Needless to say without the host's consent.

So, quite literally, the Brood do indeed rape their victims with their tentacles. 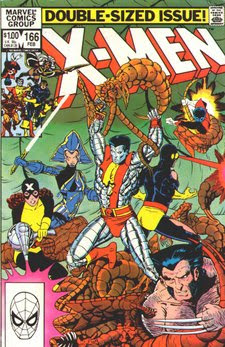 (Above: The Brood, apparently attempting to rape the X-Men)

Johnston also interviews C.B. Cebulksi, who was apparently the go-between who hooked artist Sana Takeda and Marvel up for the cover. It’s interesting to hear his reaction, but isn’t anyone going to ask Quesada, the book’s editors or Takeda herself about it? (And by “ask about it,” I mean do more than say “Hey, how about that controversy over the cover, huh?” and leave it at that*).

Cebulski seems to take the position that the comics blogosphere it beating up on Takeda, which, honestly, I haven’t seen any of (Of course, maybe I’m just not reading the same blogs that Cebulski is). Everything I’ve read has been directed at Marvel editorial; the few negative things directed toward Takeda that I’ve seen have been along the lines of “I’m not a fan of manga art” or “That’s not how black women’s hair works” or “Way to contribute to the Western-only comics audience’s stereotypes that manga is nothing but scantily clad women with big eyes being groped by tentacles.”

Marvel hasn't responded that I know of to the groundswell of criticism, but the litany is by this time familiar: the complainers don't know the characters, don't get the context, they're not the intended audience, and they're reading too much into the cover.

As someone who’s spent time making fun of how terrible everything about DC’s current Supergirl is, I think I’m actually going to feel a little guilty if I don’t buy the book when the new writer and new artist take it in a new direction, a direction that includes an art style and skill level that seems to be devoted to portraying a real girl wearing real clothes. Renato Guedes’ “concept art” is remarkable (to me) in that he does nothing to alter this Supergirl’s costume (short of lengthening the skirt a bit); he simply draws it like it’s composed out of cloth and fits the girl wearing it. And it’s a vast, vast improvement.

I’m probably still not going to buy Supergirl (Mainly because I try to avoid pointless reboots whenever possible so as not to encourage DC to keep up their bad habit, and this particular one was one of the worst, as it occurred before the universe-wide continuity reboot).

But I will definitely make fun of Supergirl less.

—It occurs to me that it has been days since I’ve said anything derisive about Michael Turner. So I guess it’s a good thing that Marvel gave Newsarama.com a look at Turner’s cover for World War Hulk #1.

Click on over if you’re dying to see a not very good drawing of much of the Marvel Universe’s biggest characters, and, if you do click there, do note that the entire image seems to be composed around the principle of not drawing feet.

In that respect, this may be the greatest Turner cover ever.

We get a big shot of the Hulk from the shins up or so, with small, background renditions of over twenty different Marvels positioned behind the Hulk’s body, fanning out with their feet hidden behind Hulk.

There’s almost 25 characters there, which amounts to almost 50 individual feet, and I applaud Turner’s ability to solve the problem. He gets away with having to draw but one, partial foot—Spider-Man’s left one (It’s hard to tell due to her size in the photo, but I think Wasp’s feet are hidden behind Punisher’s bicep).

Any way you look at it, it takes a lot of skill, imagination and guts to draw that many characters in a single image and find a way to avoid drawing so many feet.

—Note: I suck at drawing feet too, and find superhero boots and/or leotard-ed feet much more challenging than drawing bare feet or feet wearing shoes. (I intentional cut these guys off at the shins so as not to have to deal with their weird superhero footwear in this picture, and did a piss-poor job of Dinah and Diana’s feet in this one.

So don’t feel bad, Michael Turner. You’re in good company in your dislike of drawing feet. Well, you’re not alone, anyway. (I believe Gary Trudeau and Rob Liefeld also have an aversion to foot-drawing).


*Not that I blame Matt Brady for not busting Quesada’s balls about it in “New Joe Fridays.” Newsarama.com is not a site for that sort of reporting in general, and that particular column is simply a place for Quesada to hype Marvel and for Newsaramites to enjoy mediated interaction with Quesada. I’m sure Brady can only push so hard on these sorts of issues for fear of jeopardizing the site’s relationship with Marvel. Which, if ended, would reduce the content the site puts up that visitors are interested in by, oh, 50% or so.

Given all that though, I still don’t understand why Quesada took the question at all. I imagine if he was like, “Look Matt, I can’t really talk about that right now, can we just skip that question?” Brady would have complied and just not posted the exchange at all. It’s not like Quesada’s doing live, televised interviews with the comics press corps in these things.

Nor do I understand why Quesada gave such a poor answer to the question; he really sounds a little clueless about manga, Marvel alien species, comics audiences, geek culture, online comics culture and Marvel’s self-imposed ratings system. And I don’t mean to imply that he is clueless; just that he sounds clueless, and that was therefore a terrible answer. Not only did he whiff on a softball, he seems to have taken the ball right in the groin.
Posted by Caleb at 6:45 PM

On the serious tip, J. Caleb, I am really starting to wonder WHY you feel have to review anything from Marvel since you are almost without fail going to

It's fine that you have a preference for DC over Marvel. I prefer french vanilla to chocolate myself, but I've been reading your blog for awhile and I'll be damned if I can find where you crap all over such massive wastes of money and dead trees as THE FLASH, AQUAMAN, CATWOMAN, HAWKGIRL, MARTIAN MANHUNTER and just about 75 percent of the swill Vertigo is churning out.

I know "fair and balanced" belongs to Faux News and bloggers by their nature ain't fair or balanced. But criticism should strive for something more than "Supergirl sucks" and never telling the reader WHY she sucks, blows and swallows.

Step up your game, young playa.