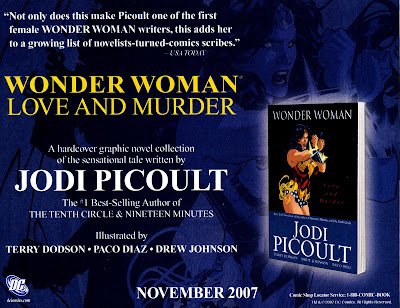 The above half-page house ad ran in last week’s batch of DC Comics, and I couldn't help but notice the blurb running with the ad, from USA Today: “Not only does this make Picoult one of the first female Wonder Woman writers, this adds her to a growing list of novelists-turned-comics scribes.”

What is striking about the blurb is how neutral it is. It doesn’t say anything at all positive about the book, but merely recites a couple of facts. Picoult’s only the second woman to write Wonder Woman, and there sure are a lot of novelists writing comics these days.

If the point of such blurbing is to sell your comic/book/movie/whatever, using a more objective third-party whose opinion won’t be as suspect as, say, a blurb form Jodi Picoult, Terry Dodson or Paul Levitz saying what a great story this is, then you generally want to get something positive to put in that blurb.

I’m always amused by the blurbs used in TV commercials or newspaper ads for terrible movies, where they have to try really hard to find someone, anyone, to say something, anything, positive about the movie they can use, and occasionally you’ll get a positive statement coming from some tiny local media outlet you’ve never heard of.

But it’s still preferable to have John “The Movie Guy” Gerrety from The Rural Bumblefuck Examiner raving “Catwoman the purr-fect summer action movie” in your ad than Roger Ebert observing “Catwoman is yet another example of Hollywood’s love affair with comics” or something.

Certainly the outlet from which the blurb comes is to be considered. USA Today saying anything about a Wonder Woman comic is good news from DC’s perspective, I’m sure, even if they don’t have anything particularly nice to say (I may be misremembering, but this wasn’t actually from a review anyway, was it? I seem to recall linkage pointing to a USA Today profile on Picoult regarding her Wonder Woman story).

But this is such a bland statement, that I’m surprised DC even bothered with it. Did no one in the mainstream media say anything nicer about Picoult’s Wonder Woman? Did no one in the comics press? (And since this ad is running in DC Comics, you can go ahead and quote Wizard or Newsarama anyway; the comics “press” saying “This book rules!” is going to carry more weight with the audience for this ad then a dry factoid from USA Today that they already knew anyway).

Even if there were no rave reviews, couldn’t the ad designers resort to the old clip quotes up to make them sound more positive trick? Sticking with our Catwoman example, say Rober Ebert said, “a perfect storm of bad filmmaking decisions, resulting in a movie that isn’t just bad, but is likely bad for you; you will probably lose I.Q. points sitting through this travesty.”

Well, it can always be clipped to this:


Okay, maybe that’s an extreme example, but the idea remains the same in less extreme instances. By carefully choosing the words you quote, where you start and end a blurb, and what you chop out to replace with an ellipses, even a less-than-glowing review can be made to sound positive.

But could it be that not only did no one in the mainstream media say anything nicer about this book than USA Today’s factual observations, but no one in the comics press had anything nice to say either? Did they all unanimously pan it, and pan it so bad and so hard that no positive blurb was even salvageable?

Just for fun, I looked to see what some of my favorite comics critics (whose stuff I could easily find online during ten minutes or so of googling) had to say about the high profile launch of the series (most critics and commentators seemed to stop reading after Picoult’s first issue anyway) to see if I could find anything positive about the book, or at least something that could be massaged into a positive blurb.

My favorite comics critic of them all, the extremely handsome gentleman who writes the comics review column for Las Vegas Weekly, covered WW #6 when it came out, and this was the most positive portion of his review: “Picoult fans will likely find it more charming than Wonder Woman fans will.”

The rest was split between factual observations a la USA Today and negative comments. The best we could get out of that would be


That same witty, kind-hearted and virie critic (who is also a great dancer) maintains a comics blog, and the nicest part of his review of the book there was, “Wow, I wasn’t expecting this at all—Very Popular Novelist Jodi Picoult’s first issue of her brief run on Wonder Woman? Not very good.”

An enterprising, and perhaps soulless ad person could easily turn that into

But not without running the risk of being called on their bullshit. And Every Day Is Like Wednesday isn’t exactly the household name USA Today is, so it’s not really worth messing with.

Another of my favorite sources of comics criticism is the Best Shots column at Newsarama.com, where a half-dozen or so attractive, witty and kindhearted comics critics weigh in on the previous Wednesday’s releases, and then people with pseudonyms chime in about how much they hate that Firestorm’s a black guy or who the best Green Lantern is, and why you’re an idiot for disagreeing.

Back in March, Best Shots crewmember O.J. Flow tackled WW #6, and here’s what he had to say: “On its own merits, Wonder Woman #6 is respectable stuff, thanks mostly to some gorgeously clean and expressive art from Drew Johnson and Ray Snyder.”

And, a bit later, “Picoult does good dialogue, and she strikes the right balance of drama, humor and action.”

Those are genuine positives, but even if you whittle them down to accentuate the positive, the best you can get is


Not exactly glowing, is it?

I next turned to Chris Sims’ blog, The Invincible Super-Blog, because I imagine sources that have the words “invincible” and “super” right there in their title are automatically more authoritative then those that don’t, and would thus be sought after for blurbing. For example, if the quote DC did end up using was from The Invincible Super-USA Today, it would be a bit more impressive, wouldn’t it?

Also, Sims has some experience being blurbed by careful blurb-crafters. He’s brutally savaged Marvel’s Anita Blake comics in his ongoing The Annotated Anita Blake: Vampire Hunter features (Which I do believe makes the ISB the number one source for Anita Blake comics coverage, just in terms of amount of attention paid to them). And proving they have a great sense of humor (and/or were hard up for positive quotes), when it came time to find blurbs, they included a “Grab a copy and follow along” from Sims, which is how he kicked off a typical post ridiculing an issue.

Well, he didn’t care for WW #6 either, and had this to say: “Granted, it's not the worst comic I've read all week, but, well, Tarot came out, and it was still a pretty heavy contender…Simply put, it's a mess.”

And that’s pretty much the most positive part of it. I guess we could snip out “Not the worst comic I’ve read” and blurb that, but, well, maybe USA Today’s not-an-endorsement-of-any-kind blurb is preferable than “Better than Tarot!”

On to the savagecritic.com, where Brian Hibbs began his review with, “Oh. Ouch. Lots of problms, not sure where to begin," and ended it with, “Fairly AWFUL.” In between we’ve got, let’s see, “vain,” “empty-headed”…Yeah, there isn’t even anything to work with here.

Oh, I know! Lisa Fortuner, that lady who’s always yelling at people about Green Lanterns! She’s a big Wonder Woman fan, and even buys, read and defends DC/Wonder Woman related works she strongly dislikes, like Amazons Attack. Surely she had something to say about WW #6 that can be snipped into blurb-able shape.

Hmmm, I don’t think there’s anything to work with in there, either.

Now, I’m sure whoever put that house ad together for DC spent longer than my ten minutes looking for a perfect combination of high profile source and a positive statement about the books, but they must not have ever found it, hence the “This is a comic book by a woman who is a novelist” blurb from USA Today. I sure couldn’t find anything more positive than that, and now I kinda feel sorry for whoever it was who had to look in the first place. Spending a whole work day or two reading horrible reviews of a book you’re trying to promote can’t possibly be pleasant.
Posted by Caleb at 8:57 PM

Hi, I'm the best blurb-crafter on the planet and I can prove it:

Okay, okay. I feel deep remorse for what I have done. With my deepest apologies to Jodie Picoult, Wonder Woman and Kevin Powers. :-D

Yeah, I saw that too and thought 'hmm, that's the best they could find?' I'm as big a WW fan as there is, and I thought the Picoult run was rubbish! You would think they wouldn't have used a blurb at all when all they could find was what they went with. I still think Jodi would've done a good with a one shot story arc or an All Star WW book. So sad. :(

You have amused me greatly with your exegesis of hypothetical Wonder Woman blurbs!

Utter crap of the highest degree. A chibbing in govanhill is much, much better than this tripe

This is how the blurb should've read:

“Not only does this make Picoult one of the first female Wonder Woman writers, this adds her to a growing list of novelists-turned-comics scribes*.”

*See Amazons Attack for the other half of this story.

I noticed that blurb line too and had pretty much the same thought. It would have been less embarrassing to use no quote at all.

I assume that Picoult's contract guaranteed her a trade? Or is this just a reward to her for actually *finishing* her WW arc (more or less), unlike Heinberg?

I'm sure the plan was always to put a Picoult arc in a trade and get in book stores, as that's where her name would have the most pull. She's really a huge "get" for DC.

Now, why they had her write a tie-in to an ill-considered crossover ideas that DC passed on a year or so ago when it was originally considered, instead of stand-alone graphic novel or miniseries where she could just write whatever the hell she wanted, I'll never know.

I THOUGHT THE SAME THING

I was like.. that's.. so bland.. they couldn't find nething better? It'd be just like getting a quote that says "Jodi Piccoult is a writer."

Ami Angelwings said...
This comment has been removed by the author.
11:29 AM

"A level of comic writing not seen since the Bruce Jones NIGHTWING run."
- notintheface

Hmm, "In the long history of Wonder Woman writers, Jodi Picoult is one of them."