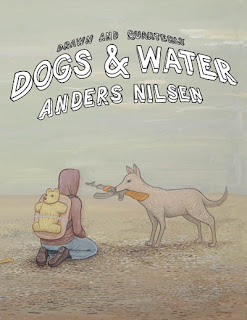 Dogs and Water (Drawn and Quarterly), by Anders Nilsen

Why’d I wait?: You know, I’m not sure if this ever showed up in my shop or not, so I’m not positive I purposely chose not to buy it upon release. Amazon says it was an August release, and publisher Drawn and Quarterly lists it as a July release on their website, but I don’t recall seeing it in my local comic store over the summer, perhaps because they didn’t get it or perhaps because I wasn’t looking for it. I’d heard the title mentioned in connection to Nilsen’s name before, but didn’t know it came out already.

Why now?: Because I saw it at my local library, remembered how much I enjoyed the last Nilsen book I borrowed from there and, come on, who can resist that intriguing cover? I love the mysterious story it suggests, to the point where I immediately want to know what the hell is going on between this figure and this dog with the gun, yet at the same time kind of like just wondering about it and not knowing.

I should also point out that the book design itself is quite lovely. The book’s on the short side, about a hundred pages, but the pages are wider than your typical trade paperback, and it’s got a hard cover and spine that remind me a bit of old elementary school text books.

Well?: The very thing I found most off-putting about the book—and as I was reading, I didn’t much care for those first few pages—rather quickly became something I admired about it.

The style in which Nilsen tells this story is rather idiosyncratic, and though it reads like a comic book, it doesn’t look much like one, so immediately the reader is pushed off balance with that little surprise.

See, there are no panels in it. The images all appear as if there were, but there are no borders and gutters, no rectangles framing each image. The images simply sit upon the page, arranged more or less as if there were panels, but someone had come and taken them away. (For a sense of what I’m talking about, you can see some preview pages here and here).

Now I know Nilsen isn’t the first person in the world to use this sort of technique, but generally when you open a graphic novel, you expect to see some grids on the page, so any time you don’t, it can be a little surprising.

The lack of borders also draws attention to the setting, making the desolate, flat, nameless land seem like it goes on forever in every direction, which, as far as we can tell from the story or what we learn from the protagonist, it does.

There’s also a level of intimacy engendered by Nilsen’s panel-less pages, and the somewhat abstract black and white art. While reading it, there were a few times I got the feeling that it wasn’t even run through a printing press or anything, but that it was just a big sketchbook that Nilsen had hand-drawn and stuck on a shelf in my library.

That particular illusion is broken up during night scenes, in which (one) color is added to make things darker, and dream sequences, in which the colore of the ink lines change from black to blues or silvers or grays.

As for the story, we follow a young person backpacking along a highway in the middle of nowhere, talking to the teddy bear he has tied to his pack. The setting is purposely indistinct, but there’s a haunting post-apocalyptic vibe to it—it’s clear that people are now extremely few and far between, animal life is much more common than it is now, and cars are extreme rarities.

While our protagonist marches through this tableau, he encounters a small group of deer, he’s pursued by a pack of dogs with a somewhat unexpected agenda and eventually comes across signs of human civilization that evokes the modern Middle East (there’s some rubble that used to be buildings, a pipeline, soldiers, a downed helicopter and a little kid with an assault rifle).

Would I Travel Back in Time to Buy it Off the Shelf?: I don’t know. It’s definitely a great read, but even knowing that ahead a time, I don’t know if I would have wanted to fork over $19.99 for such a quick experience, no matter how nice it would look on my bookshelf (That said, it’s a book that likely rewards multiple readings).

If your library has a copy, or take requests on what to order from patrons, definitely give it a look. And if you’re at least $19.99 richer than me, go ahead and buy it, I guess.
Posted by Caleb at 5:46 PM