This Is Not A Graphic Novel...Oh wait a minute, actually it is 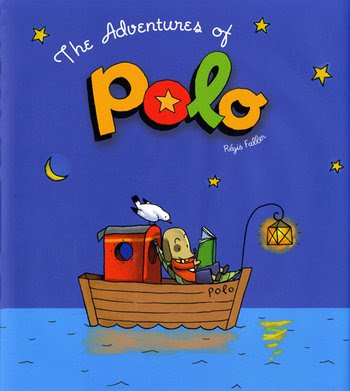 You know the one about judging a book by its cover, right? Well, here’s a good example. From the outside, artist Regis Faller’s The Adventures of Polo (Roaring Brook Press; 2006) doesn’t much look like a graphic novel. It’s a big, colorful, 11-by-10 inch (or thereabouts), hardcover rectangle that looks like your average children’s picture book.

But inside? It’s totally what we think of when we hear or use the term “graphic novel.” The story is completely wordless, with no dialogue or narration of any kind. And while many pages are devoted to a single image, 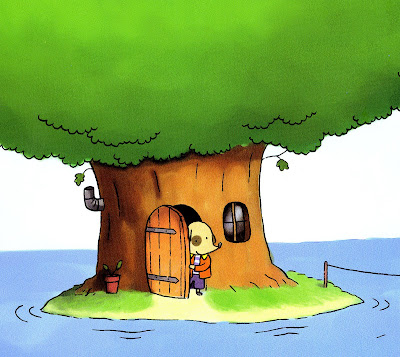 many more are broken into panels; borderless images stacked side by side and on top of one another in comic book-format grids, with the white spaces between them forming naturally occurring gutters. 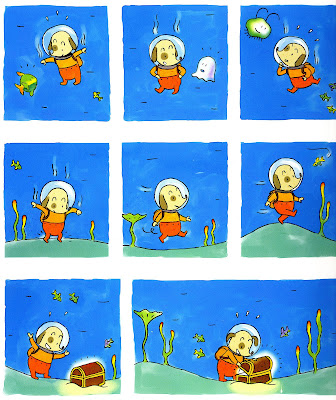 Faller’s art is great, and his designs top-notch (although something about dog-star Polo’s nose bugs the hell out of me…I don’t like the cylindrical shape of it, and the way it stands erect), and the colors are brilliant and well-chosen. There are plenty of neat little moments in the book, the plot of which is essentially simply Polo wandering around until Faller runs out of pages.

Polo lives on an island dominated by a tree house (that is, a house that is actually a tree; the page above is the first page of the book). On the second page, he puts on a back pack (which we soon find is filled with all kinds of crazy things) and an umbrella and than walks on a tightrope over the ocean. This rope becomes a line that forms stairs, than a slide and after a very circuitous route to a boat, he’s off on his adventures.

The book reminded me a lot of a side-scrolling videogame, particularly something from the old Nintendo Super Mario Bros variety, I think in part because it seems to be a cute little 2-D figure exploring locales at random, and in part because of the specific settings and objects encountered (clouds, underwater, the backs of whales, the moon, mushrooms, stars, etc).

I kind of found myself despising Polo throughout too, and it goes beyond my not liking the looks of his nose. There’s a certain irresponsibility about the character that irks me. He just goes off and gets in some pretty serious scrapes, but something always happens at the last minute to save him a justified death. Like, when he rides an asteroid into the ocean and is about to drown, for example, a pelican swoops in and picks him up in its bill. The universe seems to love Polo a little too much, and bends probability to the point of breaking to save his ass. I suppose if I were a little kid, I might not mind, but as a grown-up, I found myself getting really stressed out by Polo’s reckless actions, and angry that he never suffered for them.

Once he gets to his boat, which, in the first sign of Polo's incredible vanity, is named after Polo, the little dog sails until night time. Then he puts on his diving suit (complete with bubble helmet), and drops the ocean floor. He finds a treasure chest with a glowing star in it (above), and this he takes to a large fish wearing a crown and holding a stick. He puts the star on the fish's stick, and the fish magics him back up to his boat.

The S.S. Polo is then beached atop a whale, and Polo converts his boat into a plane, which the whale then throws up into the sky. He visits an island with a volcano, and ten an island with a monkey band, which Polo rocks out with in their tree house (which is a series of platforms on a tree). Then, in an incedible act of irresponsibility, Polo and the monkeys tie helium ballons all over the platform, causing it to rise high into the air above the island. How are you going to get down guys? You'll fall to your deaths when the helium runs out!

But wait, Polo's got a propeller in his backpack, which he somehow attaches to his pack and propels himself with. But a huge mosquito pops his baloon, and Polo falls to his death...

But, in one of many instances of Polo's incredible luck, he lands on the water but doesn't sink. He just stands on the surface. Is Polo Jesus? No, he's just standing atop a submarine. 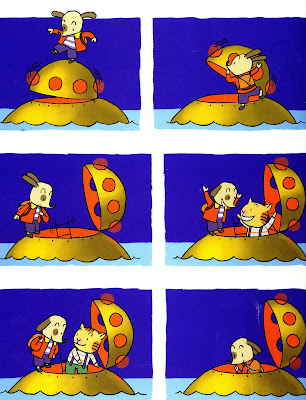 Even though the vessel is capained by a cat, the natural enemy of Polo's people, the cat welcomes our hero into the sube with open arms.

This leads to a pretty funny sight gag: 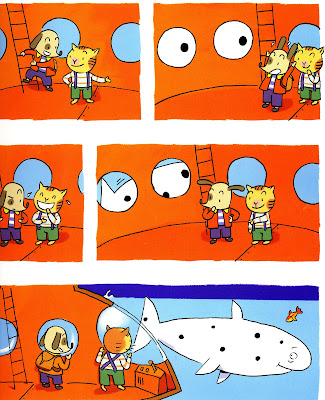 Then things get really weird.

Dog and cat pool their efforts, each manning one of the two sets of pedals that power the sub. Soon they crash into an iceberg, and surface to investigate. At the top of it they find an igloo.

Who could live here, I wonder? Perhaps it's an eskimo or- 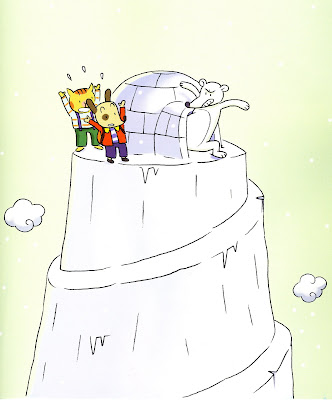 When the bear rushes out of its igloo to defend itself and its home from the two intruders, it slips on the ice and falls into the ocean below.

Polo and his cat friend sensitively laugh at him and then Polo's all like, "Hey, let's look in his house!" 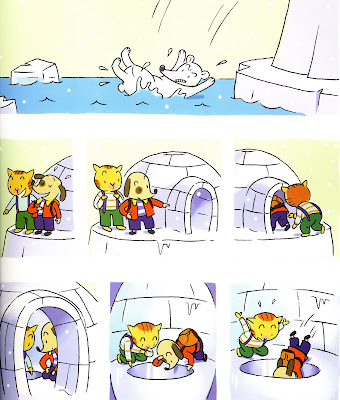 And what an odd house it is. There's nothing in it but a huge...hole in the floor?

And what's in the pit? 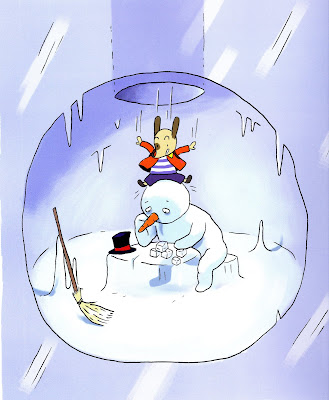 Okay now, I don't want to overthink a kids' book here or anything, but indulge me for a paragraph or so. The bear's igloo houses nothing bug a pit...in which he keeps a snowman. And that snowman does not look happy to be there. He's just sitting there staring worriedly down at his stack of ice cubes, making the same face I do when I sit down to pay bills or do my taxes. Did the bear capture him and put him down there? Did he build him down there, bring him to life, and leave him there? What's the bear planning on doing with him? Eating him? Is this like that scene from Silence of the Lambs? I really can't make heads or tails out of this situation.

Anyway, the snowman's happy to meet Polo (He puts his tophat on special just to tip it at Polo). Polo whips a chisel and hammer out of his backpack, and then quickly tunnels his way out of the iceberg. From there, he jumps to a smaller nearby iceberg, and chisels the hell out of it until its suddenly transformed into a working boat made out of ice. The cat, snowman and Polo ride on until they encounter a rope ladder. The cat and Polo scramble up it, leaving the Snowman and the ice boat. He doesn't seem to mind, and whips out a newspaper to read. (This is the third sea-going vessel Polo's abandoned in 60 pages).

The ladder leads to the moon, where they find an orb-shaped spaceship in which a little moon creature lives. It leads Polo into a crater, while the cat just, like, stays in the ship.

In the tunnel, Polo encounters a magic mushroom. 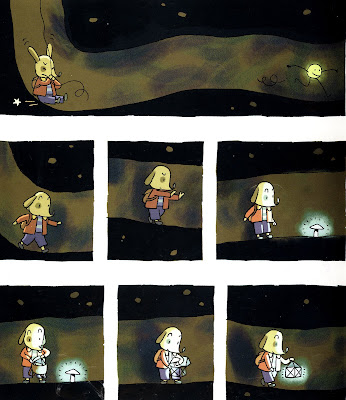 The tunnel opens into a cavern full of huge glowing mushrooms and lots of little glowing moon people. They point out another magical mushroom to Polo, and, after a few adjustments, he blasts off in it, headed back towards earth. 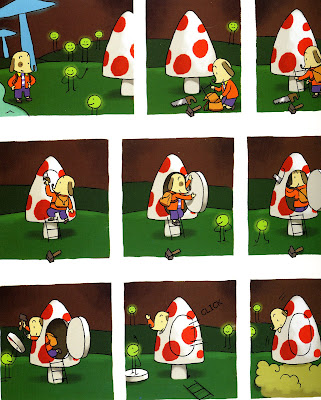 The trip was cut short by a collision with an asteroid, which sent Polo plummeting into the sea (this is where the previously mentioned pelican saves his ass).

The bird deposits Polo safely back on his island , and he promptly pulls out a book to read. What's he reading? 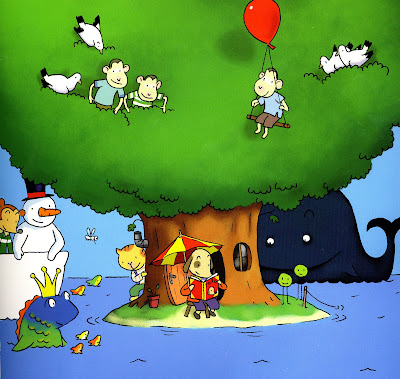 Why, that vain bastard...

Many of the creatures Polo encountered on his adventures return in this last panel. It looks like a happy ending. For everyone except for the polar bear, who doesn't show up. Perhaps he hit his head on an ice chunk and drowned.
Posted by Caleb at 6:24 PM

Labels: not comics, picture books, this is not a graphic novel

But how will the snowman survive on Polo's island?!

I've never made a point of telling you, Caleb, but I always get a big kick out of your reviews of children's books that I would never have heard of otherwise. Keep it up.

i love it. maybe its the fact that its a quarter past 4 in the morning, but this made me laugh. mushrooms are awesome, kids.