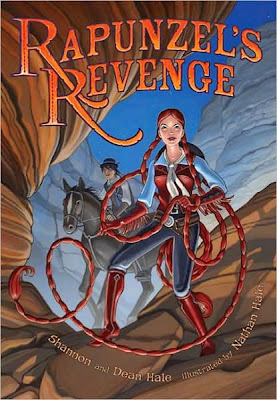 The basics of the well-known Rapunzel story are all here: the pregnant wife with taste for the titular leafy green, the forbidden wall the husband scales, the wicked witch, the girl trapped in a tower with hair long enough for a prince to climb up. But they’re just points on a plane in Rapunzel’s Revenge (Bloombury; 2008), a graphic novel that tells a sweeping adventure story starring a young girl with really long hair by connecting those story points with an elaborate and fully-realized world and characters.

The work of three people named Hale—married writing team Shannon and Dean Hale and an unrelated artist named Nathan Hale—Rapunzel’s Revenge updates the Brothers Grimm fairytale to the point that it’s barely recognizable, but, at the same time, doesn’t make it wholly contradictory of it either. This is all the stuff that could have happened around the details we’re familiar with. Maybe.

Twelve-year-old Rapunzel lives in a large villa with her stern mother Gothel and servants and soldiers dressed like extras in a Zorro movie. The closest thing she has to a friend there is one of the guards named Mason, who teaches her rope tricks in his spare time. Rapunzel’s never allowed to leave the villa and, in fact, has never seen the outside world, thanks to a gigantic, impenetrable wall that completely blocks her view.

Eventually she manages to scale it and see the horrible state of the world beyond and, worse still, meet her real mother, who is forced to work in Gothel’s miserable mines, in a desert world under dreary, polluted-looking skies.

See, Gothel is a witch who has mastered “growth magic,” giving her the ability to make things grow or not grow to suit her whims; that makes her the de facto ruler of her world—which seems to be roughly a mid-to-late 18th century version of the American southwest—as everyone must pay her whatever taxes and fealty she demands if they want to be able to ever grow crops or livestock.

To punish Rapunzel for her rebellion, Gothel has her taken out deep into the woods and imprisoned in a huge tree tower for years; food magically grows from the tree to keep her fed, and the magic effects her hair, so that it grows at an incredible rate while she’s there. To while away the years, Rapunzel braids her hair into ten-foot long braids, and practices knots and rope tricks with them, until she can use them as lassos or bullwhips, depending on her need.

Finally her hair is long enough that she can begin to rappel down the tower (The prince in this version never manages to climb up). From there the story shifts to an episodic adventure story, as Rapunzel meets a young thief named Jack (apparently of And The Beanstalk fame) and they decide to rescue Rapunzel’s real mother and somehow vanquish her fake mother, whose negative impact on the world they constantly encounter on their journey.

The unnamed land is decidedly western, and yet the Hales eschew any sort of one-to-one adaptation between the original Rapunzel story and a wild west setting; this isn’t really the Grimms’ Rapunzel retold as a western as much as it’s the story of a naïve but heroic teenage girl with battle braids and her clever, occasionally cross-dressing sidekick fighting their way through a fantasy world, encountering wild boars, outlaws, posses, coyotes, a jackalope and a giant water-going snake along the way, with every new threat conquered by a novel application of a really long braid.

Shannon Hale is the author of Princess Academy, River Secrets and other young adult novels I’ve never read, and just plain adult novel Austenland, which I’ve also never read. Whether it’s the influence of her co-writer husband, or simply a strong aptitude for the medium, she’s surprisingly deft at comics scripting for a prose writer, having mastered the dual narratives of the words and pictures and, more importantly, the way they relate. The Hales use that relationship for descriptive effect (“That’s me there,” narrator Rapunzel says in a panel depicting her) and for ironic juxtaposition, as when she explains how she was able to “swing gracefully from my prison…climb down the tree’s branches…and land triumphantly on the forest floor,” while the art shows her crashing awkwardly through tree branches and splash-landing into a heap in a shallow pond.

The target audience here is likely a younger one then 31-year-old male comics geeks, but I found this to be an appealing all-ages adventure story that is actually for all ages. I never felt like I was reading something beneath me, so I imagine kids won’t feel talked down to at all.

I also appreciated the way the Hales were able to present an ass-kicking (my word, not theirs) heroine without blowing a trumpet and banging a drum to announce that “She may be a girl, but she fights better than any boy!” They have a similarly organic approach to diversity; I don’t know if Jack is supposed to be a different ethnicity than pale-skinned, red-headed Rapunzel or not, but his skin, hair and eyes are much darker, and people with various complexions show up through out the story, with no one forced into magical negro or sacred Native American roles or plot points revolving around their differing backgrounds.

But mostly I enjoyed it because it was an imaginative story about a character visiting whip-braiding violence upon the wicked, using her tremendous tresses to bridle and bronco-bust rampaging beasts, and getting involved in a cute teenage love story.

Its looks don’t hurt any either. Nathan Hale’s background seems to be in children’s picture books (The Devil You Know, which I’eve never read, and Yellowbelly and Plum Go To School, which I just read and didn’t much care for), but his sequential art is, like the other Hales’ comics writing, remarkably accomplished. If this is really his first comics work, then this is a hell of a debut.

The cover gives you a sense of his character design for the heroine (although that’s but one of the half-dozen outfits she wears during the proceedings). While that image is apparently fully painted and given some dramatic lighting, the interiors look drawn and colored in a more traditional comic book fashion (i.e. they look like illustrations rather than the insides of Invincible Iron Man).

These interiors are awfully evocative of the work of P. Craig Russell; the characters don’t necessarily look over much like Russell’s, and they move in a more loose, animated, newspaper comic strip-like fashion than Russell’s more stately figures, but the pages and panels taken as wholes give off a vibe similar to some of his work.

According to the creators’ bios on the back flaps, Mr. and Mrs. Hale are already working on a sequel. I’m not sure if that’s a good thing or not, as the book is so completely complete, that it would be a shame to un-end it and risk an addition that may not be as satisfying. But on the other hand, this was a pretty great comic, particularly for folks whose primary focus hasn’t before now been making comics, and I’m eager to see more work from all three of them in the field.
Posted by Caleb at 5:11 PM