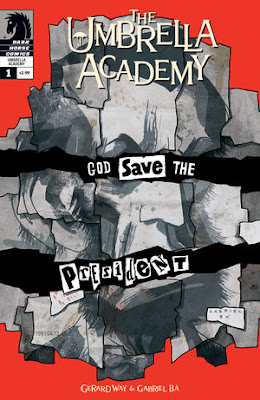 As a member of a rock band, Gerard Way is probably more acutely aware of the concept of “the difficult second album” than most comic book writers, and the danger of him hitting a sophomore slump with his second Dark Horse miniseries seemed all the more likely based on how damn good the first Umbrella Academy turned out.

Yes, he was working with a great editor (Scott Allie) at a great publisher (Dark Horse), and he was paired with an incredible collaborator (artist Gabriel Ba), so the creative success of Umbrella Academy probably shouldn’t have come as a surprise. But in the post-Kevin Smith comics industry, in which not being a comics writer is often seen as a virtue in and of itself when it comes to the writing of comics, tourist writers are all too common, and back issue bins are littered with their unfortunate efforts. A pretty good comic by a non-comics writer is rare. A pretty great comic by a non-comics writer? Hell, we’re talking unicorn-rare there.

So yeah, I was kind of expecting him to fail ever since Umbrella Academy #1 was announced, yet a kick-ass first issue gave way to a kick-ass second issue and on and on until the series wrapped, and the thing reads even better in trade; Way crafted a single story as much as he wrote six comics scripts.

The sequel series, The Umbrella Academy: Dallas, presents Way with a whole new opportunity to fail—now he has the added pressure of living up to high expectations, rather than surpassing low ones.

But there’s just no percentage in betting on the guy to fail, because while it’s obviously still early in, Dallas #1 is every bit as fun, funny, fast-paced and furiously imaginative as Apocalypse Suite #1 was.

It opens in the White House, with Sir Reginald Hargreaves, the manipulative, mustachioed weirdo who played Charles Xavier to the Academy kids, cutting a deal with the president in exchange for his team’s monument-bashing services.

“Are we really fighting another monument?!” the boy that will grow up to be Kraken asks incredulously, and the answer is yes. Previously the kids battled a berserk Eiffel Tower, and it’s pilot, Zombie Robot Gustave Eiffel. 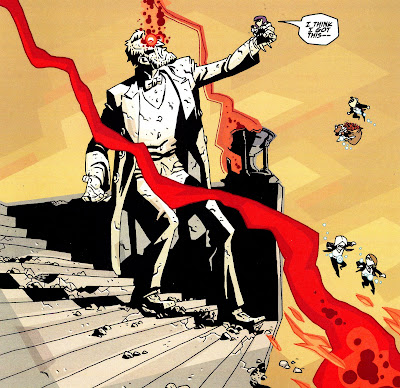 Yes, that’s the Lincoln Memorial, in the act of going berserk, red Kirby dot-emanating Darkseid eyes and all. 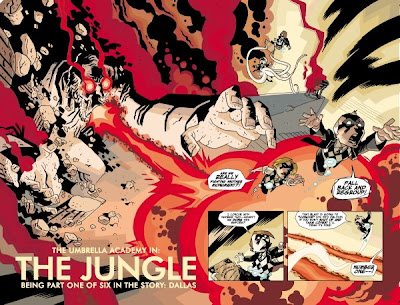 Flash-forward to “today,” which is after yesterday, which was when Apocalypse Suite went down. The Academy has been reassembled deep below the ruins of their former home, with the various characters now more or less a team again, although each still very much on their own paths.

Spaceboy is filling his gorilla gut with cookies and milk while watching reality television, Séance is adjusting to his newfound celebrity, The Rumor is still pretty pissed at The White Violin for taking away her voice while trying to destroy the world (even if the latter can’t remember hurting the former), The Kraken is breaking bones in the pursuit of justice and Number Five is killing the hell out of an army of dudes sent to stop him from screwing up the timeline too much or something, in a bravura, eight-page battle scene that is a nice reminder of just how much Ba brings to this particular table.

One of the greatest virtues of the original series was the way its creators suggested so many more stories than the one they actually told. We saw the birth of the children, we saw them as child superheroes, and we saw what happened after the death of Hargreaves, but obviously a lot happened in between those events, enough to imply dozens of great stories that have yet to be told and, hell, may never be told, but the knowledge that they’re there—wherever exactly there is (Way’s imagination? The reader’s? On crumpled up wads of paper full of notes from Allie in Way’s wastebasket?)—makes the story-world of Umbrella Academy seem a big, exciting place that I imagine quite a few readers will continue to be eager to explore.

I know I’m more eager to see more of that world; even more anxious than I was to see if Way would succeed or fail as a comics write.

Again, it’s obviously quite early in the new series—the first issue of Apocalypse Suite gave very little indication of where the story was eventually going—but the groundwork laid out is quite fertile.

Whether you appreciate it more for Ba’s kinetic art and chunky character design work, or the What If…The X-Men Were Actually as Awesome As You Thought They Were When You Were Ten-years-old? premise, or the simple weirdness of scenes in which a chimpanzee wearing a powdered wig and a jetpack and carrying a sack full of dynamite is only the third strangest element, Dallas is Apocalypse Suite all over again. Purchase accordingly.

P.S.: Since I managed to get through a whole review without sounding as negative as usual, I suppose it wouldn't hurt to point out that this issue will also ship with a variant cover by Jim Lee, and that the Lee cover totally fucking sucks. I like Lee's recent DC work a lot, and I think he's grown by leaps and bounds as an artist over the last decade or so, but he's not really much of a cover artist (see also his Trinity covers). His Umbrella Academians are particularly lifeless looking, with the children looking like teenagers, their grown-up versions looking like rejects from the old Image Comics (and it's not easy making a guy who has the body of a gorilla and a metal diaper on look like he came from Youngblood or WildCATS 1.0. They just look so...normal. Also, nice job making the implied meaning of the subtitle blindingly obvious. Sorry to pack all the negativity into a post-script like this, but I hate to see Lee cranking out sub-par cover efforts when he should be drawing shirtless Alfred working the heavy bag, Vicki Vale prancing around in her panties and Batman and Robin painted yellow to talk shit on Hal Jordan or something.
Posted by Caleb at 8:46 PM

I missed Umbrella Academy the first time around, but picked it up in trade and loved it. I will definitely be purchasing Dallas.

The Lee cover is also like ten bucks isn't it? I know I wouldn't be getting it for that reason alone...

As interested as you've now got me in UA, you've just given me a greater urge to go reread ASB&RTBW.

I don't know that it was discussed. It seemed like when they operated on her, they rebuilt her, so maybe that's her skin now. She's still all White Violin-ed out in this issue, even though she's lost her memory and is recovering in a hospital-y bed.


The Lee cover is also like ten bucks isn't it? I know I wouldn't be getting it for that reason alone...

Ohhh, it's one of those variants, is it?


you've just given me a greater urge to go reread ASB&RTBW.

All-Star Batman and Robin, The Boy Wonder is a lot like the bible...you can read passages of it daily.

For the jaded fanboy geek that I am the UMBRELLA ACADEMY was a revelation and the best team book in the past decade. It was a group/family thrown together for the weakest of reasons but I could understand the motivations behind the relationships between all the characters immediately. What mainstream team book can claim that. And its the RELATIONSHIPS that are the key to the success of any team book. Not since the PEREZ/WOLFMAN Teen Titans has someone understood that. Story is easy - relationships are hard. That is why I can't wait for DALLAS... Gabriel Ba is the discovery of the year and this series' secret weapon.