I was pretty hard on last Wednesday's Secret Invasion #8 (on account of it being such a poorly written comic book), and have been making fun of various panels from it ever since.

So I thought I'd bring what somehow turned into Talking About Secret Invasion Weekend to a close by posting another of Bendis' late-nineties Plain Dealer strips that I happen to still have around my apartment: 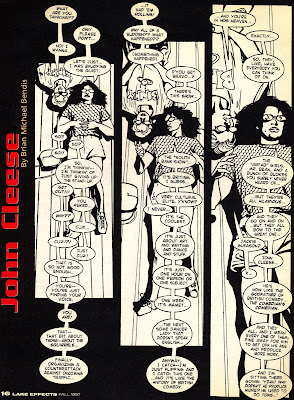 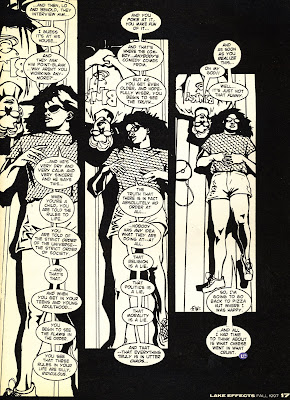 After I found the previous Bendis strip I posted and realized that it was torn from an issue of the PD's Lake Effects magazine section, I remembered that I still had an issue of it in The Very Large Stack of Magazines I Should Probably Throw Away, and thought that it might have a Bendis strip in it as well.

This was from the very first issue of Lake Effects, marked Fall 1997 (which is probably why I saved it—I would have been in college at the time, and hoping to move to Cleveland to write for a living. What foolish dreams of grandeur I entertained in my youth!).

The cover story was written by the PD's humor columnist Michael Heaton, about a Lakewood neighborhood and some of the hip businesses that dotted it at the time. There's also an ambitious feature following four young people who work day jobs to support their creative after-hours efforts, a profile of a Cleveland talk show, a feature on Ultimate Frisbee and another on rock band Skunk Anansie and then Bendis' strip, and that's the whole magazine.

It's a pretty damn nice spotlight for the then-young and up-and-coming Bendis, whose strip appeared across two pages, giving him a full 11-by-16 inches to work with.

Once again, this is an extremely Bendisian strip. It takes a reader all of three sentences or so to immediately identify it as the work and voice of Bendis. As Tony said of the previous strip in the comments section, this seems like something that is more of a prose piece than a comic. The story is told not through images—perhaps other than the fact that it all looks kinda nice laid out in one, big, static image—but through the dialogue, and there's absolutely nothing done here that could only be done in comics. Hell, the images are for all intents and purposes simply repeated over and over, with only their size and a slight turn of the head or a hand gesture from the characters differentiating the panels.

It makes me wonder if back then Bendis saw himself as a cartoonist, or simply a writer who ended up working in comics, as he seems to do all of his story-telling through words, and the images exist only as a place to put the word balloons. (And I think if you look at some of Bendis' worse comics over the years, there's this same tendency to simply ask the artist to draw repeating panels for his dialogue to be lettered into—the most offensively bad example of this is the concluding chapter of Secret War, which still pisses me off every time I think about it).

But on the other hand, a comic strip maybe is the perfect place for a little anecdote type story like this or the other Lake Effects strip. In both cases, we don't know the characters, and it hardly matters. The setting doesn't matter. It's the anecdote itself that's the thing, and if that's all Bendis has and all he wants to share, well, it might make for a scene in a short story or screenplay, or a few paragraphs of an essay, but otherwise, maybe a comic strip is the only place for such context-free scenes.
Posted by Caleb at 5:06 PM

Has Bendis actually done any prose stuff? While he writes very dialogue heavy, I have to wonder can he describe a scene or a character without pictures backing him?

I'd like to see him do some prose, now that it comes up; he could write something very readable. I can't say I'm assured it would be good, but I could see him pulling some Nick Hornby style page turning.

Maybe the pictures are just there to call attention to the words. If he just wrote that as three paragraphs of prose, your eye wouldn't be as likely to alight on it.

I can stomach a mohawk of dialogue peppered across a two-page spread with some sort of graphic design sense.

That much dialogue in prose? Ouch.
That strikes me more as a film script. Like comics, at least there's a reason for someone to grind through it, in that medium.