The previously reviewed Shrapnel: Aristeia Rising #1 tells the story of a future, colonized Venus in danger of invasion by the marines, and the citizenry rising up to defend their home planet and government.

There are a lot of swear words in it. I remember coming across "dick," "asshole," "asses" and "shit." (The last one I remember quite clearly, as it was used in a strangely constructed sentence: "This war might'a been thrust on us like stink on shit").

One word you won't see, however, is "fuck." And yet writer M. Zachary Sherman writes a few lines of dialogue in which a form of the word "fuck" is called for—specifically, "fucking"— but rather than actually having his characters say "fucking," they say "effin.'"

Here, for example, is a marine, who's commanding officer has just said, "We're marines, and who can tell me what USMC stands for?" The marine responds thusly: 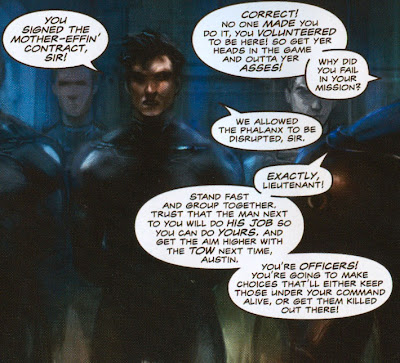 "You Signed the Mother-effin' Contract, sir!"

Seems strange that the marines would self-censor like that, doesn't it? It's my understanding that the military, they love the salty language.

At the end of the next scene, two miners who have been out drinking and gotten in a bar fight are talking about how things have changed for the worse since the solar war. The male miner, whose name I believe is Jammer, curses the alliance and the marines thusly: 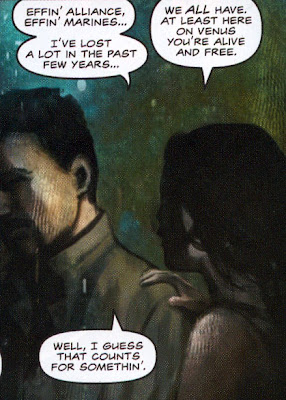 Of course, it is the future, so maybe over the decades or centuries "fuck" evolved into "eff." Well, at least it hasn't evolved into "frell" or one of those sorts of made up feature swears...

I could understand Marvel or DC not wanting "fuck" spelled out in one of their books(or at least not spelled out and sloppily covered up), but this is a fairly new, independent publisher, isn't it? Aren't they kind of supposed to be putting "fuck" in their books and pushing envelopes and things? From what I skimmed of your original review and saw in this post it looks like the book is not kid friendly. The only rationale I can figure for self-censoring like this is the fear that some shops won't carry it because they think they might have trouble with another "comics are for kids" lawsuit. While that's good publicity for the publisher, shops won't stock it if they think it will bring trouble.

We're going to end up buying everything online or in a trade from Borders in ten years time, aren't we?

We're going to end up buying everything online or in a trade from Borders in ten years time, aren't we?

You're assuming Borders will be around in 10 years time. Probably not at the rate they're going. Oh, and Borders (and other large retail book chains) stocks the kids' material right alongside the "mature" material. Very surprised there hasn't been an uproar there. I have to really watch what my kids pick up in the graphic novel section. At least TokyoPop and Marvel have ratings so I can at least use that as a guideline.

There really is no rationale behind what is being pointed out here. In movies, they usually use such tricks to avoid an R rating, but here, where they're basically free to put whatever language they want in the book, it just doesn't make sense.

I'm going to blame it on the LOL phenomenon that shortens all words. So now FUCK is just EFF, as in WTF. Wait, that doesn't work. Maybe it's a typo and it should be FN, but the letterer didn't understand and wrote it out phonetically.

Putting the FN back in comics!