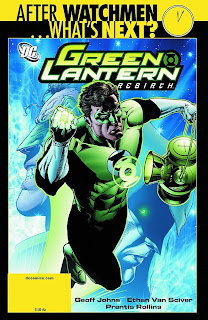 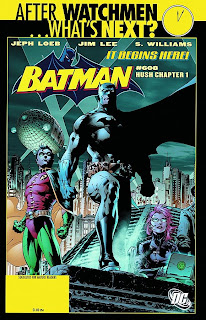 So, DC's plan is to go with the total opposite as a means of getting new readers?

I mean even if these were good choices for new readers, which they clearly aren't, isn't DC falling way behind to publish them, what four months after the movie has come out and any positive buzz it generated is dead and rotting?

I laughed too. Then I remembered (and I'm absolutely serious) that when I first started reading comics I read Watchmen, returned it to the library and promptly got out Rebirth and Hush. So...it's not that crazy. That or I'm crazy. I don't know.

I don't see how this is a major problem unless you're only comparing the books in terms of quality (which would be stupid, because no one else is Alan Moore).

You sir, will be recieving word from my seconds, and a duel to the death!

Oh c'mon. Its important that people mock Rebirth. I mean it stopped Hal from being interesting as the Spectre and returned him to being the giant dull dud he'd been before...

If we don't mock things like Green Lantern: Rebirth, then they'll never learn. It's for their own good, really.

I actually quite enjoyed Green Lantern: Rebirth.
Well, apart from any of the bits that involved Hal Jordan or Batman, all those sucked.

I agree with Caleb when he says that Johns run on GL is both stupid and awesome at the same time. That means we can both mock Rebirth and enjoy it, right?

I say this not merely to avoid dueling Sally due to cowardice, but I actually did like Rebirth. I thought the Parallax bug thing was a real cop-out, but Johns built so much around it since that it's forgivable, and yeah, punching out Batman, staged the way it was, is on my list of The Top Ten Dumbest Scenes Geoff Johns ever wrote, but in general, it was a pretty good series.

I thought the Everyone's a Lantern! solution as to what to do with Kyle, John and Hal question at the time was a pretty elegant solution (which DC fussed with way too much in the times since, with that Ion business).

Like, if Hal Jordan HAD to come back to life and become a heroic Green Lantern, Rebirth was probably the best possible story.

It's no Watchmen though...

I liked a lot of the art in Hush too but, again, not exactly the logical extension of Watchmen...

Well, no, but christ, Caleb, what else is?

If you were in charge of DC - and not their Vertigo or Wildstorm lines - what else would you possibly recommend as a followup to Watchmen that the average non-comics reader would be able to understand and perhaps enjoy?

That right there sums up every single thing that's wrong with superhero comics as a business...

As for non-Vertigo followups for Watchmen (though many Vertigo series have been in this promotion, so I don't see why the caveat), how about the Giffen/DeMatteis/Maguire JLA #1? Very clearly influenced by Watchmen, also clearly good.

Then there's Morrison's Animal Man, Dark Knight, Seven Soldiers, Starman, and you could make a very strong case for 52...

That's *only* using in-continuity superhero stuff, which is *not* the stuff you pass to someone who liked Watchmen anyway...