Based on the Grand Comics Database's gallery of covers for Jumbo Comics, Sheena's weapon of choice seems to be her knife. When it comes to long-range weapons though, she'll often resort to a spear or bow and arrow.

Or, if she doesn't have a spear or bow and arrow handy, she'll resort to using leopards—alive or dead—as projectile weapons.

Here, we see Sheena placed in a trap by the villainous Scarlet Arrow, so she must choose between being attacked by a leopard or triggering a volley of arrows from an arrow-shooting machine. Sheena lures the leopard into triggering the machine, its pouncing body blocking the arrows, and then she uses the now dead leopard to take down Scarlet Arrow like so: 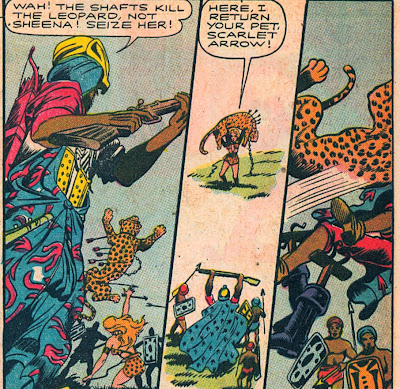 How far do you think she threw that leopard at him? Twenty feet? Thirty?

In another instance, she's forced to fight two leopards at the same time, so she does the only sensible thing, and grabs one of the leopard to throw at the other one: 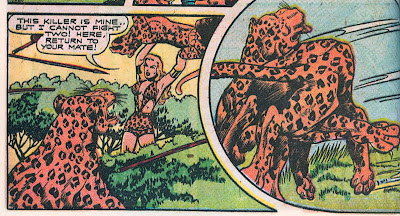 Not quite as much distance on that toss, but then I didn't see either of those leopards get up after that panel either.

I haven't watched 1984's Sheena: Queen of the Jungle since I was a kid, but I don't remember there being very much leopard-throwing in it...

Both of the above scans are taken from The Best of Golden Age Sheena Vol. 2, which I promise to now shut up about. For now.
Posted by Caleb at 2:38 PM