Take, for example, The Ghostbusters and manga.

I don’t think I’ve ever had occasion to mention The Ghostbusters on this site before, but I was a seven-year-old boy when the original film came out and, suffice it to say, I was a fan (Even though I had to close my eyes every time the terror dogs were on screen).

It was a great movie*, but, more importantly, it was a great idea for a movie, which drove my affection for the concept and the characters for so long as a kid. Like Star Wars, it was the kind of movie you could play at recess, and dress up as your favorite characters as for Halloween.

Certainly animators found an awful lot to work with, producing a good five years worth of a cartoon series based on the movie that was one of my favorites growing up.**

I didn’t read comics as a kid, so I missed Now’s series based on the cartoon entirely, and while I tried an issue of a more recent miniseries, from whoever published the one that had Daniel Brereton covers, it was pretty terrible, and scared me away from dropping cash on any of other Ghostbusters comics projects I’ve seen float through the new comics rack at my local shop.

And then I spotted this on the shelf in the teen graphic novel section of my library: 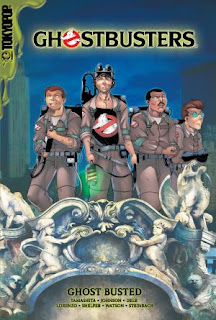 Well, as it turns out, it wasn’t all that great either.

It’s certainly a strange book. It’s apparently an OEL manga-style comic, as the…let’s see…seven creators who worked on it all seem to live in America and have, with the exception of one writer, English-sounding names. It’s dimensions are between the standard manga digest and a standard Western graphic novel, although the 200 pages are all in black and white and the storytelling is…somewhat like what you might expect from Japanese comics, although not entirely.

It’s technically an anthology of three different stories, although it’s broken into six chapters, with the second through fifth chapters all comprising one big story, and the first and last being standalone stories.

The two shorter stories that bookend the bulk of book are pretty fun, and feature the strongest artwork, but the long middle story is pretty dreadful, and I have a hard time making sense of the book’s organization.

The first story is entitled “The Theater of Pain,” and is written by Matt Yamashita with art by Maximo V. Lorenzo.

It’s where I first realized how challenging illustrating a Ghostbusters comic book must be. I have no idea what deal Tokyopop has with Columbia Pictures and/or the actors playing the characters, but I assume they weren’t allowed to just use Bill Murray, Dan Aykroyd and company’s likenesses. Similarly, they probably couldn’t use the cartoon character designs, which took pains to individualize the protagonists by giving them each a different hair color and jumpsuit color.

The artists here have to individualize the four main character designs without making them look two much like the characters one probably thinks of when one thinks of the Ghostbusters, and they also can’t rely on coloring to help out.

That can’t be easy, and it wasn’t easy as a reader always telling who’s who—particularly considering the frequency with which the artists change. Winston was the black guy, and Egon wore glasses, so I could usually figure them out pretty quickly, but Ray and Peter were more difficult, and, depending on the artist, I often had to rely on dialogue clues.

As for the first story, it struck me as a pretty New York sort of story, dealing with the theater scene, which seems appropriate for a Ghostbusters story. It also reminded me of something that could have been an episode of the cartoon—a one-off adventure dealing with a particular ghost in a particular setting, with a beginning, middle and end. It was light-hearted and a little bit silly.

Producer Blintzy Jones is putting on a theater spectacular, a musical called Runaway Romance, about jet fighter pilots in love. It’s the sort of modern Broadway play with all kinds of crazy special effects and suchlike.

It’s also haunted. To save the show and get to the bottom of the mystery, with Peter directing and Egon starring. They eventually discover it’s the ghost of a theater critic that’s cursed the show, and are able to appease him only by producing his play.

Lorenzo’s character designs are, for lack of a better word, cute: 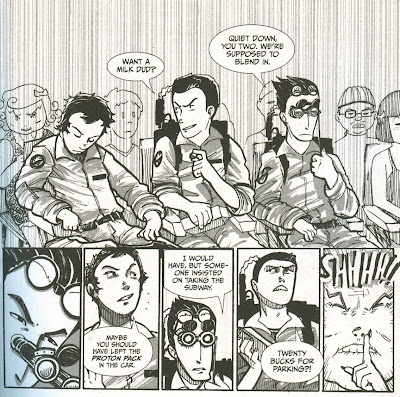 He uses a lot of panels per page, resulting in figures that look small. They’re composed of a lot of thin lines, and highly cartoony, although not necessarily in a manga style. He does slip quickly through different gradations of exaggerated design in a way that’s quite evocative of manga, with his funnier characters always looking funnier than his straight characters, and when someone’s doing something funny, they become more abstracted.

Here’s a page featuring the Blintzy Jones and the three Ghostbusters: 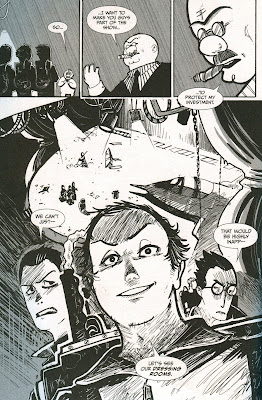 See how different Blinzty looks from the protagonists? I think Lorenzo did a pretty great job with his designs for the characters. Even out of context, if you’re familiar with the characters from the movies, you shouldn’t have much trouble putting each of those faces to the proper name, based only on their appearances and the word or five of dialogue each speaks.

The next few chapters all interconnect into one story, and this is the one I thought was the weak one. It’s written by Nathan Johnson and features art by Michael Shelfer, though Lorenzo is credited with “inks and tones,” which does mean many of the shadows cast resemble those in the first story.

It’s a pretty typical superhero comic sort of story, an evil opposite one which seems vaguely familiar, as if maybe I had seen a cartoon episode along similar lines before, but that may be simply because the idea is such a perfectly symmetrical one that it seems like someone should have done such a story before if they haven’t.

It stars Jack Hardemeyer, a character I had to look up on the Internet even though I’d just watched Ghostbusters II a couple of days ago. He was the city bureaucrat played by Kurt Fuller, essentially reprising the interfering, unbeliever Walter Peck role that William Atherton played in the original.

He’s down on his luck and blames the Ghostbusters, but ultimately allies himself with some ghosts as part of a revenge plot. His new friends essentially become Ghostbuster-busters, using reverse-engineered versions of our heroes’ gears to capture their souls and put them in a special human soul containment unit.

Each chapter follows one of the four Ghostbusters as they go out on a case of some sort solo and get busted; in the fourth, Winston frees the other three.

The solo stories that comprise each part of this storyline vary in quality, with the Egon one probably being the strongest, as it features a rather clever, unexpected reversal regarding a ghost.

There’s nothing particularly funny or exciting beyond those two neat ideas though, and Shelfer’s designs not only look much different than Lorenzo’s, they are even harder to distinguish.

Here are headshots of all four Ghostbusters, for example:

The art is softer and rounder, with bigger panels and thicker lines, and there’s a youthfulness about the characters that seems inappropriate. Egon, for example, looks like Peter Parker from Spider-Man Loves Mary Jane.

There are also a couple of passages where I just completely lost track of the action, which is never a good sign.

The final story is also the strongest, so the book definitely goes out on a high note. Yamashita writes this one as well, and it’s drawn by Chrissy Delk, who is probably the best of the three artists involved with the book (at least form what's in evidence between these covers).

There is a (perhaps too) youthful-ness to her designs as well, but they’re quite distinct, and the characters are easy to distinguish: 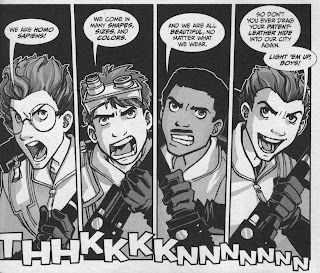 This is even more apparent when they’re outside their jumpsuits, as they are for a lot of this one.

Yamashita again provides a rather New York-specific story, in which the city provides some of the color.

The team follow a strange sense of dread and a trail of Egon’s reading (PKE readings? Is that what that thing with the little arms was called? A PKE meter?) to an expensive fashion boutique.

It turns out its run by a designer who serves Heel, an evil ancient Sumerian god that is creating “harsh and punishing” fashion that possesses those who wear it and turn them evil.

Heel appears in the form a giant high heel shoe.

Here’s a panel of heel sending some possessed minions to attack the Ghostbusters: 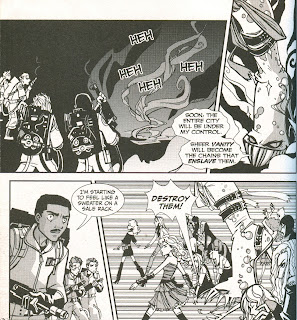 Note how Delk has them attacking as if they’re walking on a catwalk. Neat.

Before their final battle with the entity, the Ghostbusters must engage in a bit of fashion war, promoting jumpsuits as the not new thing, and then taking Heel on with their proton packs.

He/she/it retaliates by using magic to dress them in evil fashion that attempts to crush their bodies: 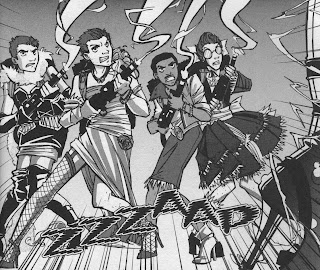 It doesn’t work, of course, and they save the day. And look good doing it: 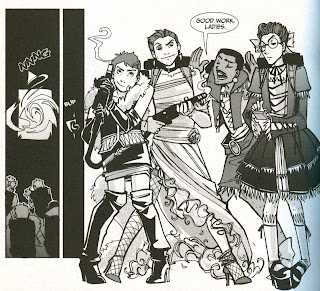 So, like I said, kind of a weird book. I hated some of it, liked some of it, and even kind of loved some of it. I’d certainly be interested in reading more Yamashita-written Ghostbusters comics, and more Lorenzo and Delk-drawn ones. But Tokyopop really needs to work on their presentation.

*I just re-watched it and its sequel last week too, so I can state with confidence that the original remains a pretty great movie, and held up much better than I thought it might. I’m not sure why the terror dogs scared Young Caleb so much though; they’re just Muppets. The sequel was much less terrible than I remembered it being, too, but there’s quite a gulf in quality between the two.

**This I haven’t rewatched at all since my initial exposure, so I have no idea how it holds up. I'm kind of afraid to seek it out, for fear it might actually be completely awful

RELATED: While searching for images of the cartoon character designs, I stumble upon the website of The Orlando Ghostbusters. Included in their gallery is this image, of model Lexi Katt dressed as the cartoon’s Janine: 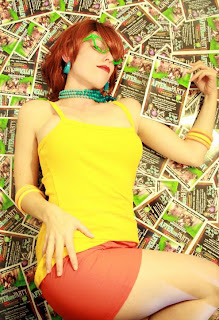 Wow. I haven’t been to any big conventions before and never much understood the excitement regarding dressing up as characters and cosplay, but I guess I just haven’t seen enough ladies dressing up as cartoon characters I had a crushes on in grade school.

Speaking of which, I wonder what will happen if I Google “Lady Jaye” and “cosplay”…
Posted by Caleb at 7:58 PM

Speaking of which, I wonder what will happen if I Google “Lady Jaye” and “cosplay”…

Depends on what level you have your Safe Search on most likely...

Time-Life released the Real Ghost Busters on DVD. I was amazed at the way they held up. Some serious creepy stuff, and not at all "kiddie".

I guess I just haven’t seen enough ladies dressing up as cartoon characters I had a crushes on in grade school.

Yeah, that's pretty much it, right there. :)

I might be the only person on Earth who really likes Ghostbusters 2, but I think it's a fine sequel. Doesn't compare to the original, but it's a lot of fun.

Ghostbusters: Legion is one of the best licensed property comics ever, shocked to see you called it horrible.