Sometimes I read about comics even when I don’t mean to. 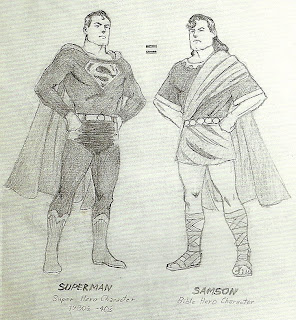 (Above: An Alex Ross sketch of Superman and one of the Old Testament heroes he drew inspiration from in his understanding of the character, taken from Mythology: The DC Comics Art of Alex Ross)

A few weeks ago at a small local library, I stood facing their tiny, new non-fiction books section. It consisted of two bookshelves shorter than me, four or five shelves in each unite, and if there were even 60 books on it, there couldn’t possibly have been any more.

As I’ve confessed here repeatedly, I’m not much of a prose fiction reader, but for all the comics I read, I obviously recognize the value of the non-illustrated written word, and am always reading something, almost always non-fiction.

On that particular day in that particular library, I didn’t see anything that caught my fancy, but I needed something to read on lunch breaks and at bedtime, so I ended up grabbing a book about the war in Afghanistan and America’s Prophet: How the Story of Moses Shaped America (Harper Perennial; 2010), by Bruce Feiler (“Bestselling Author of Walking the Bible,” according to fine print below his name on the cover, which I noticed when I got home).

I had never read anything by Feiler, nor did I remember hearing of him at the time (I have heard of Walking the Bible though, which was and is quite popular), but I was mildly interested in American history, mildly interested in religion and I needed something to read—the thesis in the sub-title was intriguing enough that I thought, “Okay, I’ll bite.”

Mixing scholarship with interviews, the location and conduct of which are included in his s narrative, Feiler talks about the importance of the Moses story in America, and follows its application through eras of history, chapter by chapter—the settling of the New World by religious exiles from the Old World, the American Revolution, the presidency and life of George Washington, slaver, the Civil War, the Statue of Liberty and the period of immigration and so on.

I made it all the way to the eighth chapter, entitled The Ten Commandments and surveying pop culture applications of the story in the 20th century, before comics came up, and I realized that I was reading about comics again—even if accidentally, this time.

“The most influential use of Moses as pro-American propagandist during these years may be the least known,” I read while on my lunch break the other day. “It comes from two book-ish Jews in Cleeland, Ohio,” Here I got excited, because Cleveland is in my neck of the woods, and I have never heard of any pro-American Moses propaganda coming from there before.

Then I finished the sentence: “who in 1938 channeled their religious anxieties into a cartoon character they modeled party after the super hero of the Torah.”

The two book-ish Jews were, of course, Jerry Siegel and Joe Shuster, and the cartoon character was Superman.

Feiler goes on to discuss Superman, Golden Age comic book superheroes, their Jewish creators and their Jewishness for the next four and half pages, interviewing Up, Up, and Oy Vey! author Simcha Weinstein in the process.

As a presumably literate and engaged reader of comic books, you’ve probably heard all of this before. The real-world origin of the Superman character, how his parents put him in a rocket ship as a baby to save his life just as Moses’ mother placed him in a basket to save his, Kal-El’s surname echoing a Hebrew name for God, Superman/Clark Kent as a metaphor for the dual identities of Jews wrestling with whether to assimilate and to what extent, the superheroes’ battles with Hitler and Nazi Germany (sometimes given a fictionalized veneer, sometimes not), Joseph Goebbels’ reaction to the character (“Woe to the American youth, who must live in such a poisoned atmosphere and don’t even notice the poison they swallow daily.”)

This isn’t a book for literate and engaged comic book readers, however, and I suppose it’s quite likely that a majority of the people who read, are reading or will read Feiler’s book have never heard most of this superhero/Jewish stuff.

There were two things I wanted to take note of, beyond the obvious, “Hey look, there are superheroes in this book!” observation (and a heads-up regarding Weinstein’s presence).

Firstly, at the end of the section, Feiler puts a question to Weinstein that he asks sources throughout the book.

…while it makes sense that young Jews might identify with these superheroes, why did they resonate so much with Americans as a whole?

…why isn’t Jesus part of this?” I asked. “Or David, or Abraham? Why is Moses the foundation of so many of these stories?”

“Because Moses is the greatest prophet,” he said. “And the story of Moses is the story of the hero. He’s weak. He’s fleeing his past. He can’t speak so well. Yet he becomes the greatest leader in the history of the Jewish people. If you look at any narrative—in film, theater—there’s an element of Moses in it. It’s the ultimate journey. The hero starts out doubting himself—‘I can’t do it. I can’t be a leader.’ Yet he rises to the occasion and saves the day.”

Almost everyone Feiler interviews seems to get asked some variation of why Moses instead of Jesus. The answers vary from person to person and context to context, but in general Moses seems to be a less divisive and more universal figure. He’s shared by all three of the major monotheistic religions to come out of the Middle East, and he is certainly central in Judaism in a way that Jesus is not (One of the interesting things I learned from this book was that there was a movement among "some prominent left-wing Jews" prosoed changing the very name of the religion Judaism to "Mosaism," after Moses).

But Moses is also regarded in a very similar fashion between all of the various branches and sects of Christianity as well—Protestant, Catholic, Mormon, etc.—and the Masons, the deists and more secular, unaffiliated with a particular religion people can view a sort of kinship with him, as his humanity or divinity isn’t a subject of various interpretations in the way that Jesus’ is. (Even a few believers note that Moses is human, Jesus is not; that makes Moses more easy to relate to).

I bring this up because trying to plug Superman into a Moses-shaped hole is difficult, to say the least.

Certainly elements of his story seem similar to Moses, but, like a divine Jesus, Superman isn’t human, and the miraculous powers he evidences aren’t awarded to him by God (or an outside, higher force, working through Superman), they’re his. In that respect, Superman seems more Christ-like than Moses-like. (Although I suppose one could wrack one’s brain, and drive oneself insane, making the analogy work. If Superman’s super-powers are derived from the sun, then does that mean Superman = Moses and the sun = God…? No, because originally Superman’s powers came from earth’s weaker gravity, and besides, Superman is still alien, not human. Well, can we look at Siegel and Shuster as God, since they created Superman? Or does his alien-ness ruin that analogy as well? And so on.)

This is the other thing I wanted to discuss. Here is how Feiler breaks down the similarities between the Superman and the Moses stories:

Just as Moses was born into a world in which his people faced annihilation, Superman is born on the planet Krypton, which is facing extinction. Just as baby Moses is put into a small basket and floated down the Nile by his mother, baby Superman is placed into a small rocket ship by his mother and father and launched into space. Just as Moses is rescued by the daughter of the pharaoh, Superman is rescued by Jonathan and Martha Kent in a Midwestern cornfield. Like Moses, Superman is raised in an alien environment where he has to conceal his true identity. Just as Moses receives a calling from God to use his powers to liberate his people from tyranny, Superman receives a calling from his father to use his great strength “to assist humanity.”

That’s all true enough. Superman’s science-fiction, space-alien origin story presents difficulties, though. Moses, after all, really was an Israelite, sent to be raised an Egyptian, but ultimately returning to save his own people, the Israelites.

Sueprman was Kryptonian and sent to be raised an Earthling; he discovered he was really Kryptonian, but by then all of Krypton was wiped out, and he was called to save Earthlings. That would be a bit more like Moses being the last surviving Israelite, and operating as a hero to the Egyptian people, right?

I’m taking a very close, very narrow, perhaps too close and too narrow reading of the two stories and Feiler’s cursory comparison of them though—hey, I’m a comic book fan, it’s what we do!

That is, winning their freedom from Egypt was only part of the Israelites’ story. The more significant part was the period of lawlessness and chaos in the desert, which was put to a sort of end when the Ten Commandments were introduced. Freedom depends on law.

That part of the story seems particularly difficult to attach to the Superman story. Even look at the story in rather broad terms, I can’t see a point where Superman and “his people” really form any sort of new covenant that replaces the previous—prior to Superman appearing on earth?—order.

I suppose that is the nature of a character in a serial medium like comics, particularly one that is owned by a company that makes money off of his continued adventures, and thus his adventures must continue in perpetuity. His never ending battle isn't just marketing; it really is a never ending battle, and there’s not really any chance for a conclusion or a resolution to his ongoing conflict.

Moses, as potent and mythological a figure as he may be, has an ending to his story. He really is a human being, and he really dies. While Moses and his story obviously continue to live on, the living Moses is repeating that same life of events over and over, rather than having new and different adventures constantly.

That’s never going to happen to Superman, at least not in any permanent way. While Moses’ story has a beginning, middle and an end, Sueprman’s is infinitely episodic, a perpetual motion story machine going through little beginnings, middles and endings, then starting over again immediately.

Superman will never get to that third part of the story, but he must keep freeing his Israelites from Egypt over and over again, as they get captured every month between issues.

Neither Moses or Jesus works perfectly as a comparison, though since the creators obviously weren't out to tell a version of the Moses story, that isn't surprising. (In an earlier draft, Superman was a villain. Its certainly not the case that the original point of influence was Moses)

Unlike Jesus, Superman isn't sent to earth with a purpose other than survival (though they added more Jesus symbolism in the 78 movie)

I don't think there's anything inherent in the original character to say he can't age, either. One imagines Lois certainly will.