This month there sure are a lot of books featuring great artists drawing scantily clad ladies being released: 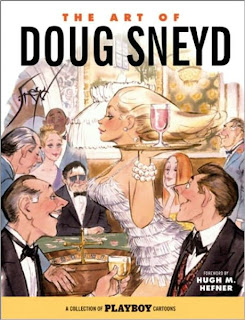 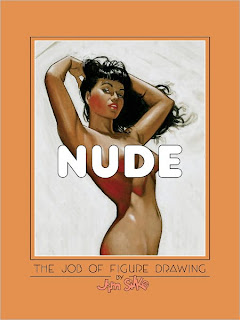 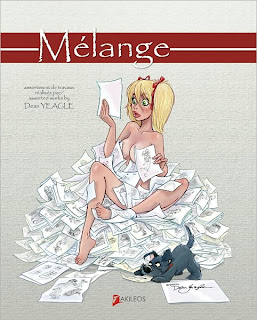 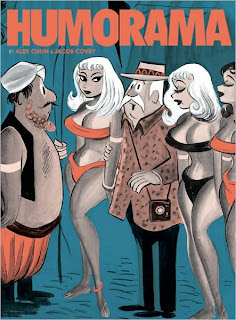 That's Dark Horse's The Art of Doug Sneyd and Nude: The Job of Figure Drawing by Jim Silke, Editions Akileos' updated new version of Dean Yeagle's Melange and Fantagraphics's publication of editor Alex Chun's The Pin-Up Art of Humorama (that particular publisher/editor pair have produced a series of collections of men's humor magazine pin-up art in the past; generally specific to a particular artist).

Torsten Adair had those four books following one another in his monthly "Coming Attractions" feature at The Beat, which kind of underscored the commonality.

Also in that same column, Adair includes this: 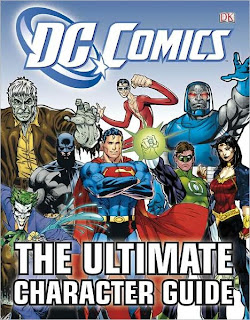 Which I just thought was hilarious, and I may have even laughed out loud when I saw it, because I am turning into an actual crazy person from thinking about DC's September relaunch (You know that part in police procedurals or movies about serial killers or characters driven insane by contact with something from beyond mortal ken where the people in long coats and flashlights—usually police types—stumble into a crazy person's house, and the walls, floor and even ceiling are covered in scrawled drawings or figures or words produced obsessively all over the place? I think that's what my house is going to look like by August 29; all ink drawings of Barbara Gordon and the number 52 and the words like "Batwing" and "Frankenstein, Agent of SHADE" and "Was Time Drake ever Robin III or not?!" written over and over and over again).

Back in 2004, when I was a (relatively) wealthy writer/editor at a (relatively) big city altweekly, I happily dropped $40 on The DC Comics Encyclopedia: The Definitive Guide to the Characters of the DC Universe form this same publisher; it was essentially an illustrated character encyclopedia, wrapped up in a Alex Ross cover. I read it straight through and loved it, because if there's one thing I love, it's DC Comics characters, and if there's two things I love, it's DC Comics characters and reading encyclopedias (I'm not actually kidding about that last bit; reading Jerome Clark's three-volume UFO Encyclopedia from Omnigraphics during lazy summer afternoons on my porch last year is among my favorite reading experiences, as was reading a children's encyclopedia of Norse mythology on Saturday mornings after cartoons).

Of course, I was somewhat chagrined that I bought the damn thing—and that DK published the damn thing, and that poor bastards Scott Beatty, Robert Greenberger, Phil Jimenez and Dan Wallace spent God knows how long researching and writing the damn thing—and almost as soon as it came out, DC comics started fooling around with their continuity in the biggest way since Crisis On Infinite Earths. You could flip to almost any random page of this, and find something that Superboy Prime punched away or that the recreation of the 52 Earths of the multiverse at the end of 52 un-did.

Anyway, I guess they're publishing a new version of this? With a horrible cover? And it's going to come out two months before DC completely relaunches it's history and universe, thus changing a lot of what I imagine is in this?

Unless, of course, the folks re-creating and relaunching the DC Universe in September worked so far ahead that they assembled this gigantic character guide and were able to provide all of the info to DK in advance, making this book an indispensable guide for both readers and DC creators (Although, as has been repeatedly pointed out, it sure seems like DC Entertainment decided to relaunch their whole line one day, and handed out assignments to creators the very next day, giving 'em a couple of weeks to make the characters and concepts work all of a sudden in a way they apparently never had before).

I'm assuming that the book will be full of pre-reboot info though, since the cover shows Superman and Batman look like they're wearing their old duds, and Wondy's wearing her new costume, not her new-new costume. (Although it's also possible that the cover image shown there is just a thrown-together, placeholder one, which would explain it's slapdashedness).

Since the subject of this post turned out to be July books featuring great artists drawing scantily clad women and DC superheroes, let's end it on a note combining the two. From Dark Horse's preview pages of the Sneyd book, here's a cartoon featuring a superheroine wearing a costume that looks at least a little bit like Wonder Woman's: 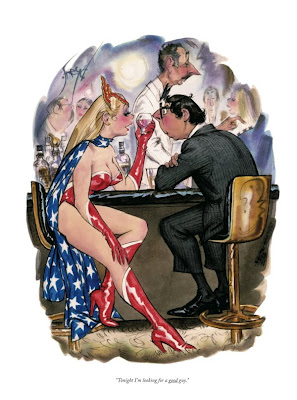 (At the very least, she seems to shop at the same stores as Wondy).
Posted by Caleb at 2:10 PM

So your going crazy in the same way as Amadeus Arkham?