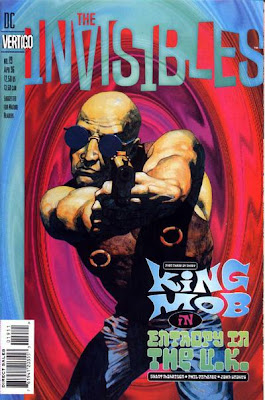 ...I have a review of Grant Morrison's Supergods: What Masked Vigilantes, Miraculous Mutants, and a Sun God from Smallville Can Teach Us About Being Human. It's a really amazing read—the book, not the review—and well worth the time you spend with it for the conversation Morrison initiates between his text and the reader's brain on the subject of superheroes. If superheroes are your thing as much as comics. The writer has a surprisingly limited view of comics, essentially amounting to DC, Marvel and the Image Comics of the '90s, as well as the British superhero comics he's read (A Dark Horse super-comic gets mentioned, but moreso because of Morrison's friendship with the author Gerard Way then because of the work itself).

I'm going to come back to Sueprgods here on EDILW in the very near future, in order to share some of the funny and controversial bits about the book , but, in the mean time, give my review a read if you'd be so kind (Actually, you don't have to read it. Just click over and give my employers your page views, please) , and give Morrison's book a read. You might hate a lot of it, but it's still worth reading.
Posted by Caleb at 7:08 PM

So, as someone who has read SUPERGODS and is reviewing it, do you recommend it? I'd like to read it, but I'd have to order it from the US and I want to know if it's worth it

Oh, it's definitely worth the time spent reading it. I'm not sure about buying it though. It's $28 and if you have to pay for shipping as well, I don't know.

I'm a bad person to ask though, as I can't remember the last time I BOUGHT a book...maybe back when paperbooks were $4.95...? I always borrow books from the library.