Batman: The Brave and the Bold #16 (DC Comics) The cover of this issue is rather unfortunate, as the action in the background doesn't make quite clear what's going on. It's Fashion Week in Gotham City, and Batman is exhibiting his many crazy costumes, "to show the public that Justice must be adaptable and prepared." The Mad Mod (the same version of the character from the Teen Titans cartoon) and his gang arrive, don Batman's costumes and then use them against him. On the cover you see only the Mod and one of his gang, so that's not really terribly clear.

In this issue—the final issue!—the regular team of Sholly Fisch, Rick Burchett and Dan Davis put Batman in this particular conflict, and send Batgirl to help and Bat-Mite to hinder. The latter is immediately, overwhelmingly smitten with Batgirl, and no wonder—he is "Batman's biggest fan" (I know! I thought it was Chris Sims too!), and Batgirl is, as Bat-Mite notes, just like Batman...but a girl.

The regular parade of in-jokes and situational humor follows, although since this is an issue with a comedic antagonist, they are amped up to eleven-teen, with allusions to things as specific as the cover of 1960's Batman #133 or 1965's Wonder Woman #155, references kids don't need to get, but adults can find a little extra joy in. 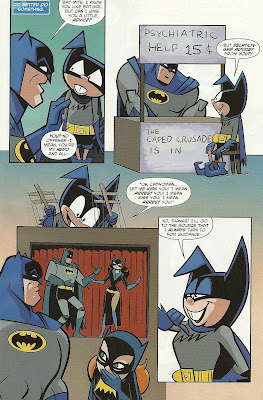 I love the looks on Batman and Batgirl's faces in the second to last panel.

As I said, this is the very last issue of the series, something that Bat-Mite—whose 5th dimensional, magical nature makes him ideal for fourth wall breaking and/ meta-textual commentary—discusses with Batman at some length on the final page. Personally, I think a high-quality, all-ages comic book series constantly introducing readers to various characters, concepts and settings in DC's decades deep catalog that uses their most recognizable and popular character as a springboard is something the publisher would want on the shelves at all times no matter what Cartoon Network's programming schedule says, but what do I know?

Look for Fisch's next writing gig at DC in the back of future issues of Action Comics. You can find Batman in, what, a good five-to-15 DC Comics each month? I'm not sure what's next for artist Rick Burchett, but hopefully he won't be away from DC comics for too long, as he's a hell of an artist. And Bat-Mite...? Well, that's a good question. Maybe he'll get his own book in the third wave of "New 52" books? He and Ace the Bat-Hound are just about the only Bat- characters without books of their own at the moment...

Green Lantern #6 (DC) Despite a few months off between the end of the last volume and the start of this volume, and despite the presence of a gaggle of inkers finishing his work (Say, what is the proper name for a group of inkers? Gaggle? Murder? Herd? Pod?), GL's pencil artist Doug Mahnke has finally, if unfortunately needed a fill-in artist.

Filling in is the completely unsolicited (and not entirely welcome) Mike Choi, who is, stylistically, a poor fit for Mahnke, Alamy and company. The best choice would probably be Patrick Gleason, paired with one of the many GL ink staff, but Gleason's busy on his own monthly DC comics, one of the 15 or so ongoing Batman comics).

Choi's work is legible, and it's not sloppy or lazy or anything like that, but his character designs are fairly off-model. His Hal Jordan, in particular, looks somewhat soft, chubby and baby-faced and ,in close-up, looks a bit like a Frank Quitely-drawn teenager. 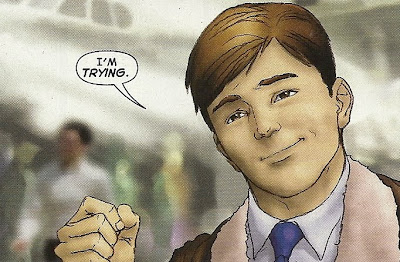 ...what gesture do you think he's making with his right hand?

Ha ha! I thought that too! I was tempted to draw in a couple of little motion lines and scan the image with them on it, but this is "The New 52," and this comic book might be worth dozens of dollars some day, if I keep it in mint condition (Shut up! It might too!) (Oh, I should not the actual gesture makes sense in context, too)

Additionally, Choi engages rather heavily in blur-effects to denote different fields of focus, which annoys the hell out of me. It's fine for comics creators to look for film-making techniques to learn how to tell a story with images, but why in God's name would an artist try so hard to replicate the deficiencies of the tool films are made with, when there are no such deficiencies in the tools of comics-making?

Anyway, this is a fairly satisfying read, one of those nice "between storylines," breath-catching books Johns used to so excel at during the first volume of JSA.

Back on earth and back together with Carol Ferris, Hal has been doing little more than fucking her and going on dates with her (Johns phrases it a little more elegantly). They're on a date to an airshow, because they are nerds, and Hal finds an opportunity to beat-up a bunch of guys.

Meanwhile, in space, Green Lantern Sinestro—whose sinister, cool, asshole-ishness Choi fails to capture as well as Mahnke's seemingly effortless crystallization of the same, is, like, visiting some old enemy of his I've never heard of and going to beat up one of his old allies (the mostly naked blue lady with the giant book). During the course of their squabble, Sinestro gets a preview of future Green Lantern storylines, and heads back to earth to cockblock Jordan and press-gang him back into being his partner again.

The scripting was a bit stronger than in months past, and the art a bit weaker, so it all evens out to Green Lantern remaining reliably entertaining. 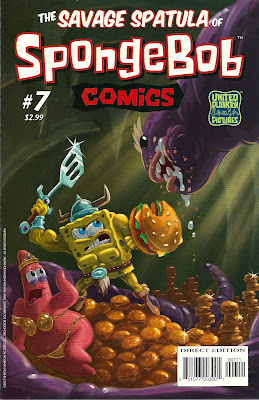 SpongeBob Comics #7 (United Plankton Pictures) What kind of false advertising is this?! While SpongeBob does fight a giant worm in this issue, he doesn't dress He-Man to do it, the worm is significantly smaller, Patrick doesn't wear a golden bikini and there are not golden hamburgers. What a--Ha! I just noticed that the shield is a giant hamburger, and the monster is eating it! That's kinda funny.

This issue contains a longer, four-page strip from James Kochalka (in addition to his "SpongeBob Funnies," the page worth of newspaper-style comic strips he usually contributes) and a ten-pager by Graham Annable, plus two more stories by people whose work I am not as familiar with, and the regular R. Sikoryak pirate-themed table of contents.
Posted by Caleb at 6:59 PM

I think any present or (more likely) past fan of Kevin Smith could tell you that the collective noun for inkers should be a trace.

The cancellation of Brave & The Bold now seems even more short-sighted than when DC cancelled Justice League Unlimited a few years back. Both were good, solid books that introduced dozens of DC characters to comic fans and both were routinely pushed aside by the publisher seemingly for no reason.

Rick Burchett is currently doing very fine work with Greg Rucka on Lady Sabre and the Pirates of the Ineffable Aether: http://www.ineffableaether.com/ .

If I was an inker... "an enhancement of inkers"

Since I'm not... "an obsolescence of inkers"

I kid. Inkers are great. Some of my best friends are inkers (or at least have inked when desperate).