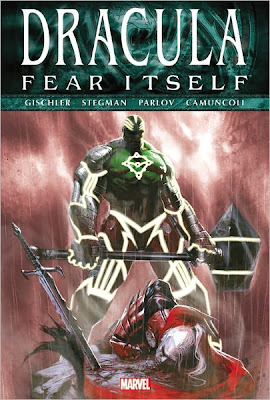 One way Marvel dealt with collecting its relatively short Fear Itself tie-ins was by combining unrelated miniseries into a single collection, like Fear Itself: Deadpool/Fearsome Four (discussed last night).

Another strategy was more tried-and-true: Filler, and lots of it!

That’s the case with this particular book, which collects the three-issue Fear Itself: Hulk Vs. Dracula miniseries by writer Victor Gischler, pencil artist Ryan Stegman and inkers Mike Babinski and Rick Magyar…and then tosses in 2010 and 2011 one-shots Tomb of Dracula Presents: Throne of Blood and Death of Dracula, both written by Gischler, both released and set before Fear Itself and both having jack to do with Fear Itself.

The Hulk Vs. Dracula story features the hammer-powered Hulk rampaging through Europe, and in the direction of a small vampire nation of some sort that Marvel’s Dracula has set up (These were the first of Gischler’s Dracula comics I’ve read, but he seems to have assumed stewardship of the character back in 2010, when he launched an X-Men vs. Vampires event).

Marvel’s Dracula no longer wears a mustache, his hair is white and he wears really big earrings and red armor not entirely unlike that he rocked in Francis Ford Coppola’s Bram Stoker’s Dracula and, somewhere along the line, he succeeded in setting up the kingdom for vampires that Paul Cornell had him struggling to establish in England during the writer's Captain Britain and MI13 series.

It seems to be something along the lines of a vampire Latveria, and Gischler’s Dracula reads a lot like Stan Lee and Jack Kirby’s Dr. Doom, although perhaps even less active an agent; Dracula spends most of the series holed up in his throne room, listening to bickering vampires from various vampire factions giving conflicting advice on how to deal with The Hulk. Dracula doesn’t actually enter the fray until the very end of the series, and Hulk pretty decisively kicks his ass.

Reading, I became quite aware that I missed out on…whatever Gischler and Dracula have been up to, in whatever books they’ve been up to it. Characters come and go throughout, and they seem like characters I’m supposed to know, but I don’t, and they don’t seem too terribly well-introduced.

There’s a superhero team of vampires calling themselves The Forgiven (okay name for a Christian rock band, terrible name for a superhero team) with X-Men like one-word codenames and specific vampire super-powers (One turns into mist, another is super-strong, etc).

There’s little, as in nothing, that really separates this story from any other army vs. Hulk story, except for the trappings Stegman draws on the characters (Hulk is bald and has a hammer, the army guys where Prussian helmets or look like the lead in Nosferatu, etc).

I was kind of intrigued by what Hulk fighting vampires might turn out like, since vampires can only be killed in particular ways, none of which the mind-less version of the Hulk is likely to be ready to employ. So I was kind of looking forward to Hulk smashing puny adversaries who, for as smash-able as they are, just won’t stay smashed. (Oh, and can a vampire bite The Hulk? Can The Hulk be vampirized…?)

But Gischler doesn’t really engage in any of this. The climax of the story is probably somewhere in the second issue, when Dracula monster-bombs The Hulk, dropping crates containing werewolves and other monsters on The Hulk. These monsters include Wendigo and, curiously, Sauron (this one, not this one), but the Hulk just shrugs them all off.

As for the conflict mentioned in the title, Hulk merely knocks down a wall Dracula is standing on, and then prepares to hit the fallen vampire king with his big-ass hammer, at which point The Forgiven appear and save the day, de-hammering Hulk and returning him to normal (Although based on Fear Itself, he must get re-hammered at some point).

That story is followed by the Goran Parlov-illustrated Throne of Blood, in which we learn the secret origin of the leader of The Forgiven. It’s a fine standalone tale of a vampire warlord in feudal Japan spreading his infection. And the art puts that of everyone else who drew anything at all for this comic—Stegman’s and Giuseppe Camuncoli’s pencil art, Bryan Hitch and Gabriele Dell’Otto’s covers—to shame.

Finally, there’s Death of Dracula, which features pencil art by Camuncoli and finishes by Onofrio Catacchio. It introduces a vampire summit in which various vampire sub-groups all gather for a big meeting, during which one of Dracula’s sons kills him (obviously, he gets better, as this story is set before the framing scenes of Throne of Blood and before Hulk Vs. Dracula.

It’s a weird story to read on its own, as it seems to be the prologue for a bigger event (It was; the aforementioned X-Men vs. vampires thing), and read like nothing so much as a comic book daramatization of that old role-playing game that lead to a short-lived television adaptation on Fox.