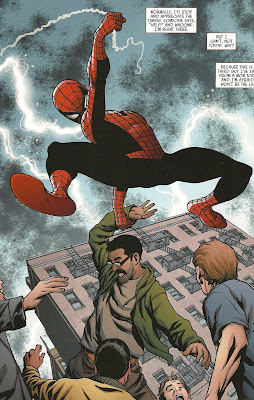 The latter fits in with pretty much any of the Fear Itself trades (though perhaps the collection of Fear Itself proper would have been the ideal place for it…?), the former seems particularly out of place here instead of, say a Fear Itself: Fantastic Four collection, which I don't actually think exists, but could probably be cobbled together out of series and one-shots prominently featuring FF characters).

The title series in the collection was written by Chris Yost and featured art by Mike McKone. It was set in the earlier parts of Fear Itself mega-plot, so the most significant moment of Spider-Man’s involvement in the storyline—the part where he is so overcome with hopelessness he gives up and swings home to Aunt May, hoping to spend the last moments before the apocalypse with her—isn’t covered.

Instead, the series focuses on Spidey being gripped by the unnatural fear—here referred to as “The Fear”, as in captions reading “Hour Six of The Fear”—and trying for several sleepless days to keep New York City from tearing itself apart with riots and craziness brought on by the fear.

It’s not until the third issue that he encounters a solid opponent directly related to the villains in Fear Itself—the hammer-possessed Ben Grimm, an encounter that involved impressively high odds, as I had previously seen the now-evil Thing take out the Red Hulk repeatedly in other comics.

There’s not a whole lot to the story that I haven’t seen done many, many times before—in fact, I think every event of similar size contains a story or two about a frantic hero struggle against the limits of endurances to persevere on the fringes of the event, don’t they?—but Yost and McKone do a perfectly decent job of it.

J. Jonah Jameson and some other supporting characters appear briefly, Spidey villain Vermin appears, there’s a kinda of squirmy scene where Spidey is being eaten alive by a swarm of rodents and Yost does a decent job of introducing random civilian characters to throw into various melodramatic wringers, to illustrate how “The Fear” is tearing average people apart. 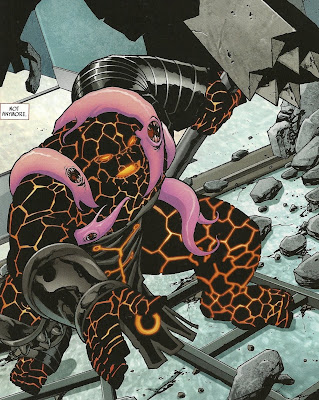 McKone does a nice, super-atheletic, almost insect-like version of Spidey (there's a fine example of McKone's Spidey at the top of the post), with lots of creepy contortions and spinning acrobatics. The fight with the Thing is nicely executed and, as I’ve said before, the Thing’s design is the strongest of The Worthy, and McKone and colorist Jeromy Cox present him in a particularly effective way.

Naturally, the fight is rather artificially resolved—this simply being a tie-in, Ben can’t actually be defeated—but there’s nothing at all wrong with the comic, really.

It’s followed by Fear Itself: FF, which also follows Ben Grimm wrecking shit with his hammer, and therefore, I guess, has a bit of continuity with the Spider-Man arc.

It’s written by Cullen Bunn, and drawn by Tom Grummet, whose artwork I’ve always liked, although I’ve liked it a lot more the last few times I’ve seen it. (Colorist Rain Beredo doesn’t make the orange bits of Ben as glow-y here though, so he just looks like a black rock guy with yellow stripes, rather than a black rock guy with volcanic lava under his black rocks, waiting to blow him apart).

Thing fights Reed and Sue, then he fights Dragon Man, then he throws Alicia into a street lamp. Then he walks off. And that’s the whole comic, really. 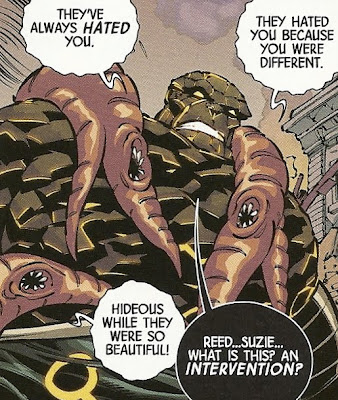 Bunn’s major invention in this issue is to have the Sarlacc Pit-like mouths on the tentacles the Evil Thing wears like feather boas talk to him, convincing him to do evil shit whenever he wavers from evil shit doing. 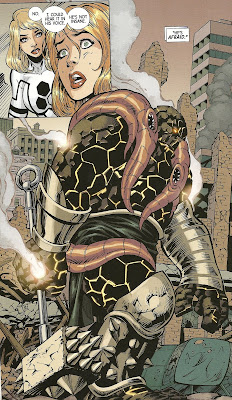 (That's kind of what The Worthy are doing anyway, right? Preparing earth for The Serpent's invasion, the way one might prepare a steak for a dinner guest by hitting it with a spikey wooden hammer...?)

And that just leaves The Worthy, the cover of which features the tagline “The Secret Origins of the Hammer-Wielders Revealed…” (Can Marvel say “Secret Origins”…? DC doesn’t own that phrase…?)

These are all four-page stories from different creative teams, generally showing the origins of the characters and only sometimes involving the hammers; a pin-up opens each chapter, also showing the Worthy’s real/normal names and their new Worthy names, most of which I’ve forgotten. 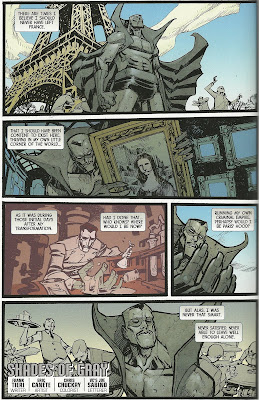 These are: Sin/Red Skull by Christos Gage and Elena Bonetti (in a style quite reminiscent of the Brubaker-written era of Captain America comics), The Juggernaut by Jeff Parker and Declan Shalvey (which makes neat use of ben-day dots), Titania by Jen Van Meter and Clayton Henry, Grey Gargoyle by Frank Tieri and Eric Canete (probably the most visually interesting of this bunch of comics; G.G. seems like a real outlier among The Worthy too, in that he’s not a big strong guy like all but Sin), Hulk by Greg Pak and Lee Weeks (Eh…generic Hulk origin recap), Attuma by Tom DeFalco and Mario Alberti (nice art, generic story), Absorbing Man by Tom Peyer and Sergio Cariello and, finally, The Thing by Roberto Aguirre-Sacasa and Javier Pulio.

That last one may be the very best one. Pulido’s art is pretty sensational, as always, and here quite heavily Kirby-influenced in design and staging—the flashback portions to the FF origin sequence look like cover songs of Kirby panels—while the modern day sequences are told in a more straight, Kirby-free style that contrasts quite nicely with the flashbacks. 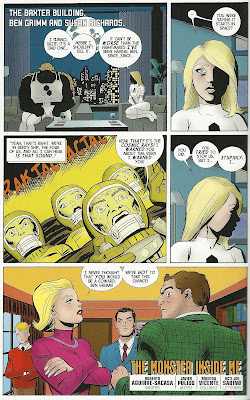 The story is essentially a tense conversation between Ben and Sue, in which the former shares a terrible, troubling dream with the latter, in which he seems himself murdering his teammates with his bare hands.

This is definitely one of the stronger—and hell, it may be the strongest—of the collections of FI tie-ins I’ve read. But its seemingly random make-up, the lack of mention of the back-ups in the title also make it one of the weirder ones.

In retrospect, I wonder if Marvel wouldn’t have been better off numbering all of their Fear Itself tie-ins, so that the impression would be of one, big, interconnected epic storyline, and the titles wouldn’t come freighted with certain expectations beyond the fact that they have something to do with Fear Itself (which, as we’ve seen in the Hulk and Dracula volumes, wasn’t even really the case). 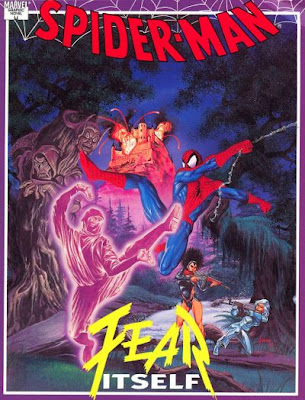 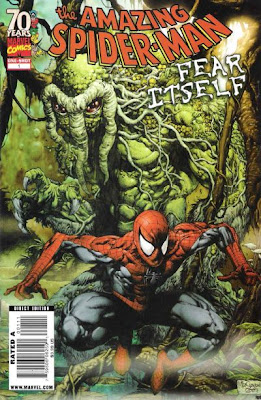 Comics editors just really like the sound of that phrase.
Posted by Caleb at 5:05 PM

When I saw the page by Javier Pulido, I thought...