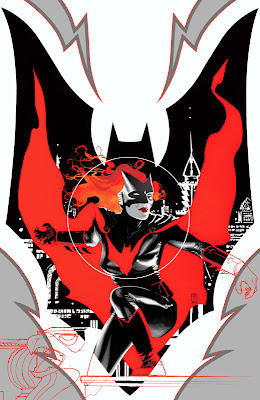 So I just read Batman Vol. 3: Death of the Family, which collects Scott Snyder and Greg Capullo's five-part story arc in which The Joker attacks the extended Batman Family. In the climactic scene, The Joker has captured not only Batman, but also Robin, Nightwing, Red Robin, Red Hood, Batgirl and Alfred Pennyworth (Who, we are told, was taken not because The Joker knows Bruce Wayne is really Batman, but because of Wayne and Pennyworth's association with Batman Inc).

The Joker's grand design is, he repeatedly proclaims, to rid Batman of all his sidekicks, spin-offs and hangers-on, who he feels are dragging Batman down, making him soft and, perhaps not incidentally, taking up too much of Batman's time and attention, time and attention that he would rather Batman spend on him.

So here's my question: Where was Batwoman?

I understand that the title Batwoman, like Batman, Inc, has been largely spared inclusion in Batman events and even having to acknowledge most of the rectons that accompanied The New 52 reboot, but in-story, Batwoman in conspicuously absent from The Joker's attentions and plans.

I understand why The Joker didn't track down every member of Batman, Inc, as the Batmen of France and Japan and Africa are a little remote for even someone with The Joker's planning abilities and resources to round-up and sit around a dinner table with the Gothamites, but Batwoman's right across town, isn't she?

I also understand that Batwoman Kate Kane isn't in the Batman Family the same way the others are—I don't think she even knows Batman's secret identity yet, does she?—and doesn't work with any of them very often, but The Joker wouldn't know that, would he? (Spoiler for "Death of the Family": No). How does Batwoman differ from Batgirl in his eyes, exactly?

I'm not saying she should have been included in Snyder's story arc, as it was already pretty crowded (Personally, I wish Jason Todd was never resurrected and he wasn't there; sorta weird that The Joker's greatest past blows to the Batman Family—killing Todd, paralyzing Batgirl—have been reversed).

Nor do I wish DC editorial forced J.H. Williams III and W. Haden Blackman to take a month or five off their ongoing storyline in order to whip up a Joker story, or surrender their book to another creative team for someone else to do a Batwoman vs. Joker story.

It's just that her lack of involvement seems a little glaring, and no one seems to have provided an in-story reason or excuse for this. At least, not in any of the 500 or so pages worth of "Death of the Family" comics I read.
Posted by Caleb at 7:37 PM

Although it's a bit weird if anyone actually points it out, Batwoman has always done her own thing in the New 52 universe (the title wasn't involved in the "Night of the Owls" crossover either). My assumption used to be that Williams had enough standing in the company to do whatever he wanted.

This makes the reported editorial inference on Batwoman even stranger. So, like, they don't have to participate in the Bat-family crossovers (which have proven to give every title at least a monthly boost in sales), but they can't get married?

It's all very strange.

If it wasn't for the New 52, my explanation would be that Batwoman is a relatively new hero in Gotham City, whereas all the other Bat characters have been around a while and have had interactions with the Joker (Agreed on Jason Todd though). He'd probably barely even be aware of her existence.

The New 52 resetting some but not all continuity makes this incredibly confusing though.

Yeah, the creative team leaving over that really surprised me too, in large part BECAUSE they seemed afforded the special "Feel free to ignore The New 52 as much as is reasonable and carry on" pass that Morrison got on BATMAN INC and Johns on GREEN LANTERN...

I just flipped through the first volume of BATMAN: DARK KNIGHT, and there were three panels of Batwoman fighting The Cavalier embedded in a montage of various Gotham heroes fighting various Arkham escapees. I guess I just expected something along those lines at least (Although, in retrospect, they probably could have had Layman and company do a Batwoman/Joker story in TEC, or at least in one of the TEC back-ups, as those were pretty wasted on Batman vs. People Tangentially Inspired By or Taking Advantage of The Joker stories.

The first New 52 Batgirl comics I read were the "Death of the Family" ones, and was surprised to hear her narrate that she was in a wheelchair for three years. In a five-year continuity. So, she was Batgirl for less than a year (presumably Batman was around at least a few months before her), injured for three years, and back for about a year...?

It made me wonder if Batwoman was active as long or longer than her...I guess I don't know when Batwoman would have debuted in the new five-year timeline. The story in 52 couldn't have happened so...I don't know.

Arguably also this Batwoman isn't a member of the "Bat-family" yet; Nightwing, Robin, Red Robin, Batgirl, etc. all pal around in the Batcave, but Batwoman not so much; Batwoman would also be the only one who doesn't know Batman's identity, wasn't brought into the fold or trained by Batman, etc. So you could say the Joker excluded her because she wasn't family, of sorts.