Batgirl #36 (DC Comics) I'm not a big fan of doing math, but I did some simple math—addition, long division—just now in order to illustrate a point about Batgirl. The book is your standard DC comic in format, 20 pages of story for $2.99. But each page has an average of 9.55 panels on it, some having as many as 13 panels, while the action scenes have as few as four-to-six. That is a lot of panels per page for a DC superhero comic. The very next comic below, for example, Batman Eternal, averaged 4.65 panels per page, with no more 8 panels on one page, and as few as half a panel on a page (There's a double-page spread).

What's that mean? Well, from a simple reading-value perspective, one certainly seems to get one's money's worth out of Batgirl. In addition to being the second consecutive done-in-one storyline (with dangling sub-plots left over from the previous issue and moving into the next issue), it takes about twice as long to read as most of it's fellow DC super-comics.

But that's just quantity; how's the quality? Excellent, and, to my great relief, not as social media-driven as last issue; I was kind of afraid that, if writers Cameron Stewart and Brenden Fletcher kept up the focus on Barbara Gordon-as-social media-crusader that they embarked upon last issue, I might not be able to keep up with the book, despite my affection for Babs Tarr, Stewart and Maris Wick's excellent art work (This is easily the best-looking book in DC's line at the moment, if you ask me).

The A-plot, the one on the cover, features a pair of sword-wielding, motorcycling girls trying to take out Batgirl—they're Kuchi-shi Futago, The Mouth Death Twins, weird cosplayers of the characters from an old, Tesuwan Atomu/Astro Boy like anime who have apparently taken up robbery and contract killing in character.

It's up to Barbara Gordon to solve their crime and bring them to justice before they can kill her alter-ego, and this she accomplishes through good-old fashioned investigation. Meanwhile, Bab's life outside of the mask continues to be just as—if not more—interesting then her life inside it. Much of this issue is set on campus, as she pursues her thesis, meets a cute TA and makes a pair of new friends, both of whom are quite handy (one whips up a grappling hook gun STAT). Meanwhile, new roommate Black Canary remains mad at her.

The creators are equally adept at drama, some of which is pretty funny (I may have laughed out loud during the last panel, and a time or two before that), and action—the fluid, dynamic moves as Babs dodges swords and motorcycle are great.

I imagine there may still be some tension existent in the change of direction, assuming you were reading the earlier issues and kept reading when the creators changed, give that as bad-ass as Babs is, she still seems to be learning the ropes of superheroing (that is, she takes out her basically amateur enemies efficiently in her second battle, but gets wounded and strategically retreats during their first encounter), and it seems as if she doesn't even know Batman/Bruce Wayne, let alone that she's part of his trusted inner circle (When she talks about money problems, for example, or needing crime-fighting equipment, I kept wondering why she didn't just call Wayne Manor).

That too seems to argue for the fact that Batgirl #35 should have been Batgirl #1 and been published in September 2011 rather than October 2014, but I can deal—I only read about one arc of the previous run on the series, and I'm more than happy to pretend it never happened. 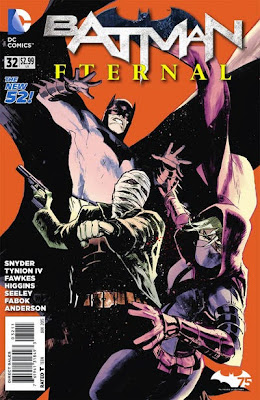 Batman Eternal #32 (DC) Kyle Higgins script and Jason Fabok draws this issue, in which Batman saves Spoiler from Hush (and then she pulls a disappearing-while-in-the-middle-of-a-conversation move on Batman whaaaat? That's Batma's thing, Stephanie; how'd you learn to out-Batman Batman...?)

The rest of the issue deals with Hush's attempts to use Batman's hidden bases and weapons caches to terrorize Gotham City in Batman's name, detonating one in a two-page spread that seems like it's a bit of a repeat of what happened with Gordon in the first issue. Not sure what Batman was doing with so much in the way of explosives in one of his Bat-Bunkers given his aversion to deadly force and all, but whatever.

It's something of a so-so issue, but it at least retroactively explains what Hush was doing in the beginning of a previous issue with blood, and brings Alfred and Batwing back into the fold. 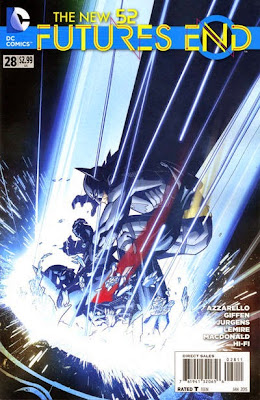 The New 52: Futures End #28 (DC) Andy MacDonald draws as Lois Lane lands on Cadmus Island and stumbles over Earth 2's Red Tornado, which, remember, is her consciousness in a Red Tornado android body! Fifty Sue volunteers to lead the team Sgt. Rock had assembled to kill her on an assault of Cadmus Island, in order to kill Deathstroke! Batman fights Batman in a terribly choreographed action scene! And Tim, Ronnie and Jason are all apparently attempting to save Madison from an experiment that will totally make her and one of 'em—Ronnie, by the look of the teaser images—into the new Firestorm!

I'd like to believe things are finally starting to come to a head, and that the climax isn't all that far away, but then I remember how many weeks are left before this series actually ends, and I get depressed. If nothing else, plotlines are starting to come together at least, so at least there's now some forward momentum. Not much, but some.

She-Hulk #10 (Marvel Entertainment) Thus ends the penultimate story arc of the soon-to-be-cancelled She-Hulk by writer Charles Soule and primary artist Javier Pulido; a three-issue honest-to-God courtroom drama involving superheroes, although much of it was set via flashback in Steve Rogers' Depression-era past.

Rogers, now a frail old man due to the results of some story in a crossover or his own book or wherever, is being sued in a wrongful death case; the prosecutor is Matt "Daredevil" Murdock, and the defense lawyer is Jen "She-Hulk" Walters. Cap wants them both to fight hard, as he want's the American legal system to either exonerate him or not.

You probably won't be surprised to learn whether Cap is innocent or guilty, but it's been a pretty intense trial nonetheless. Soule and Pulido illustrate the closing arguments rather cleverly, with Pulido drawing a full-page figure drawing of each on a simple, blank whitespace background, and chains of dialogue bubbles surrounding each, making enough room for an honestly realistic sounding closing argument. The two pages are facing one another, obviously.

The last two pages of the story, before a final page teasing the next (and—gulp!—last) story are pretty awesome, as Cap reveals the identity of the villain behind the plot, Jen and Matt try to fake familiarity with an obscure Cap rogue, and they go to beat the guy up; DD and Shulkie handling the henchman, while Cap himself rather casually lays the villain out flat in a great sequence.

I'm going to miss you when you're gone, She-Hulk...


SpongeBob Comics #38 (United Plankton Pictures) new stories from Corey Barba and Jacob Chabot, Joey Weiser and Drew Weing, James Kochalka, Travis Nichols, Brian Smith and Gregg Schigiel, David DeGrantd, Ruchard Pursel and Stephen DeStefano and Joey Weiser again, this time both writing and drawing. That, as is often the case with this title, a line-up you don't really want to pass up, no matter what the subject matter.

My favorite story was probably DeGrand's weird-ass one where SpongeBob and Patrick discover that sponges and sea stars can regenerate their limbs, and then start ripping their arms off to do strange, silly things with all the severed limbs they amass. My favorite panel, however, is the twelfth one in the Smith/Schigeil one, in which SpongeBob and Patrick respond with...powerful, disgusting enthusiasm at a sight appearing before their eyes.

The Superior Foes of Spider-Man #16 (Marvel) It had been so long since I've seen an issue of this, I looked among the back-issues of my local shop to find that yes, they had indeed forgotten to put one in my pull-file the week it came out. So I'm not sure how old it actually is—it's new to me, though!

This is apparently the penultimate issue of Nick Spencer and Steve Lieber's very funny crime comic set in the Marvel Universe, often weeks the best comic book-comic on the stands. It was, alas, just too beautiful for this world. Or at least this direct market, and so it has been canceled.

This actually reads a lot like a last issue, as our heroes protagonists all convene in one big meeting-turned-Mexican stand-off-turned-fight scene, where all five members of The Sinister Six betray one another, four of them having sold the others out to a rival, powerful ganglord, all of whom arrive on the scene at the same time.

Boomerang seems to actually get a resolution here, but the outcome of the fight scene—who lives, who dies, who gets away, who gets pinched—isn't contained in this issue. Plus, there are other characters who have yet to arrive, like Mach VII (who gets another great slapstick wings scene, plus an incredibly insincere pep talk from Tony Stark) and The Shocker.

Only one more issue to go, which is really rather heart-breaking. I imagine Spencer and Lieber had plenty of more Mach VII's-wings-are-awkward jokes in them yet. Couldn't they at least done an Axis tie-in and a "Spider-Verse" tie-in to keep it going two more isues...?

Aw, well. I'll be eagerly awaiting the next and final issues...and whatever Spencer and Lieber do next, whether it's The All-New Superior Foes of Spider-Man or something else entirely.
Posted by Caleb at 12:58 PM

Aw, well. I'll be eagerly awaiting the next and final issues...and whatever Spencer and Lieber do next

Starting in January, Steve Lieber is going to be penciling the 4-issue mini Quantum and Woody Must Die! with James Asmus.

If you like Superior Foes, you'd also probably enjoy Quantum and Woody, which is also a (very funny) superhero comedy.

Like Image, Valiant offers the first trade at a reduced price, so it might be worth checking out (Tom Fowler draws the first trade and Ming Doyle does the second, if that's not enough to entice you, I really don't know what is).

For some reason, I completely missed Batgirl, which is a silly thing to have done. I will go and pick it up next week!

God, I am so going to miss She-Hulk when it is gone.

As it turns out, Spencer and Lieber are reuniting: