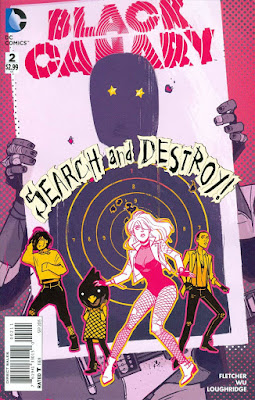 Black Canary #2 (DC Comics) The second issue of the very promising new Black Canary series by Brenden Fletcher and Annie Wu seemed like a too-quick read, and it's really no wonder. There are only about 14-pages of comics content in it, with a two-page spread devoted to a recap of sorts (presented as clippings from an article about the band Black Canary, with some drawings in the background), two more pages devoted to pull-out poster, and then two pages of illustrated prose on the back of the mini-poster. The poster makes for some fun content, but it really seems like the sort of thing one should get as a bonus, rather than in lieu of the comics one might reasonably expect.

What little is actually here is pretty good, of course. Apparently more than one mysterious force is after Black Canary (the band), either because of mysterious, meta-human band-member Ditto and/or other mysterious, meta-human bandmember D.D. (who readers now is the superhero Black Canary, but the members of the band Black Canary apparently don't). In this issue, D.D. tries to train her bandmates in various forms of self-defense (including killing people with guns?), while they are again ambushed by something that would seem to be way out of most rock band's league.

I like the art, and I love the coloring (by Lee Loughridge) and, as much as I love the comic book format, I wonder if maybe this isn't one that will be a more pleasant reading experience in collected form? At the very least, I wouldn't then find myself counting pages after reading a chapter of it. 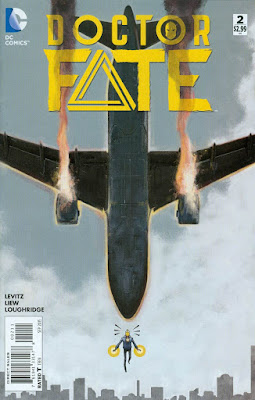 Dr. Fate #2 (DC) Not much plot advancement here. Young Khalid is still trying to come to terms with the fact that he has a magic, talking helmet that gives him powers, as he struggles to save his dad and the city from a flood and possessed dogs, both threats that have been unleashed by Anubis.

As superhero plots go, writer Paul Levitz's is simple, accessible and effective, if unremarkable, but with Sonny Liew's idiosyncratic artwork, the book is easily and instantly set apart from every other DC comic (and most of the Marvel ones) on the stand. Liew's lines going all wiggily during trippy scenes is particularly striking, as is that wonderful cover. 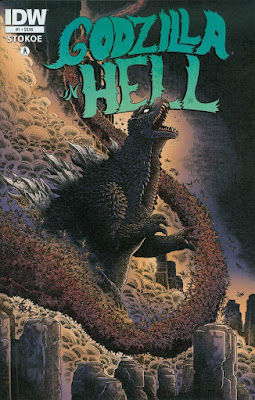 Godzilla In Hell #1 (IDW Publishing) The cover says absolutely everything you need to know to make an informed purchasing decision on this one. It stars Godzilla, it's set in Hell, and it's by Stokoe, as in James Stokoe, the man responsible for Godzilla: The Half-Century War.

It's not exactly the Godzilla in Hell comic I would have written–which would have basically been The Divine Comedy, only swapping out the protagonist for Godzilla, and the historical figures with various characters and monsters from Toho movies*–but then, this is going to be a rather weird anthology series, wherein each issue will have a different creator or creative team tell a story of Godzilla in Hell. I'm not sure what #2-#5 will be like, but this one is a standalone, done-in-one issue, with a pretty perfect story by Stokoe presenting what Hell might be like for Godzilla.

If you've read Half-Century War, than you already know of Stokoe's considerable virtues in the realm of Godzilla comics, and you'll be happy to know that many of them are on display here. If you haven't read Half-Century War, then do pick this up: It's a nice sample of what you'll find in that series, which is now available in two differently formated collections. 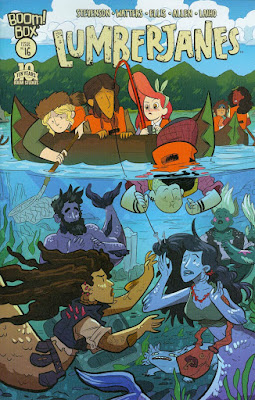 Lumberjanes #16 (Boom Studios) Okay, that's a pretty awesome cover there, Brooke Allen, telling a complete and compelling story that gives a would-be reader a pretty good idea about what the series is all about in a single image, but man, there are no mer-people in this issue!

Instead, it continues the plotline in which several 'janes from a previous generation–Rosie, Bear Lady and big game hunter Abigail–attempt to resolve some unresolved issues, which mainly entails slaying a big, dumb-looking monster with a dumb-sounding name, or stopping the slaying of said monster, depending on the character. Told to keep out of it, our Lumberjanes naturally do no such thing.

*Godzilla would naturally Godzilla his way through the nine circles of the Inferno, stomping Dis like it was Tokyo, and battling the various monsters native to Hell: Cerebus, Geryon, the centaurs, harpies, giants, devils and, ultimately, the three-faced, six-winged Satan, imprisoned from the waist down by ice. This Godzilla melts with his atomic breath, freeing Satan, in order to kick his ass in the greatest battle of Godzilla's career. With Satan destroyed, Godzilla thus emerges from hell. It could then go one of three ways ways. Either Godzilla returns to Earth alive, having been just too powerful and stubborn for hell to hold him for long–with the implication being that this is how Godzilla has seemed to return from death in the past, or he could find himself as Dante did at Mount Purgatory which he would attempt to ascend, but, finding no monsters left to battle, he grows bored, and returns to Earth seeking more battle, or the story could end with Godzilla beginning his ascent towards heaven, and facing the celestial armies, cutting off before actually showing whether Godzilla could take God or not. Obviously Godzilla couldn't–he's King of The Monsters, not King of The Universe–but it would certainly be in Godzilla's nature to pick that fight.
Posted by Caleb at 9:19 PM

I still can't get how this is the Black Canary who was in the horrible TEAM 7. Guess she was Batgirled. No one really talks about TEAM 7 though, right?

I just can't seem to get into Black Canary. Love the premise, love the art, but nothing else is clicking.

As for Godzilla, I picked up the first issue but am torn on whether I want the other, Stokoe-less issues. Love Godzilla, but have found myself left totally cold by all non-Stokoe comic adaptations.