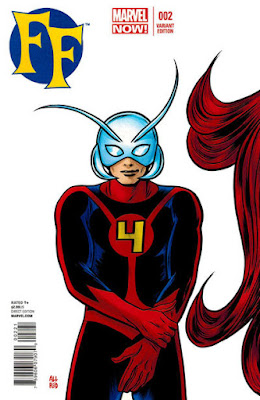 I reviewed the first collection of Nick Spencer and Ramon Rosana's Ant-Man Vol. 1: Second-Chance Man at Robot 6 yesterday, looking specifically at the way that Marvel and their creators chose to navigate between the two most recent takes of the character (In Matt Fraction, Mike Allred, Lee Allred and company's FF and the recent movie), and man, did they lean hard towards the movie version.

After spending an additional 24 hours thinking about it, as much as I love that Allred Ant-Man costume design above (swap out the blue for red and the red for black and it becomes a perfect "solo" Ant-Man costume), particularly how smooth and stripped-down it is, while still looking both ant-like and man-like, I've come to the conclusion that  the clunkier, more "realistic" costume he wore in Ant-Man Vol. 1 probably suits the story and Rosana's style better.

I was a little surprised to see that Marvel bothered to put a "1" on the spine of Ant-Man Vol. 1, however, as it is the entirety of this Ant-Man ongoing, as the book gets re-titled and re-numbered this fall as Astonishing Ant-Man (while retaining the same creative team). I would hope they will just label the collection of that series as Ant-Man Vol. 2, instead of Astonishing Ant-Man Vol. 1, because, goddammit, how confusing is that going to be, if you want to start reading the Nick Spencer/Ramon Rosana's series, and it starts with a Vol. 1, and then continues into a second Vol. 1.

Also at Robot 6, I wrote about Godzilla In Hell #1 at much greater length than I did last week here on EDILW.

And I've had a pair of recent-ish reviews at Good Comics For Kids, neither of which I think I've linked to here yet: Bandette Vol. 2: Stealers, Keepers! and Steve Jobs: Insanely Great. Those are both very solid comics, but the latter was surprisingly good, so maybe worth bringing special attention to, as I guess I knew extremely little about Jobs and just how crazy important and influential he was in crafting the world as we know it today (I had no idea he had anything to do with Pixar, for example). The style of the book is great too, particularly for the subject matter, which, as I said, isn't anything I knew a great deal about or, if I'm being honest, cared all that much about.
Posted by Caleb at 12:42 PM