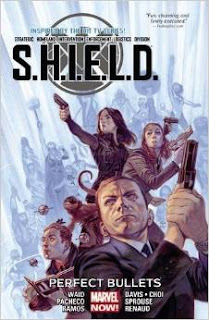 If you don’t watch the television series Agents of SHIELD, then you probably have no idea who Leo Fitz, Jemma Simmons or Melinda May are, but they are some of the characters on that show, the titular agents that work under actor Clark Gregg's Agent Phil Coulson. You're more likely to know him, as he played roles of varying degrees of smallness in various “Phase One” Marvel Cinematic Universe movies, and was later introduced into Marvel comics.

Well, SHIELD is the Marvel comic based on the TV show that is itself based on Marvel comics; why it’s not called Agents of SHIELD, I couldn’t guess. In general, it seems a lot like what I imagine the producers of the TV show wish they could do with the show, had they unlimited resources, carte blanche to fully integrate the Marvel comics universe while ignoring the Marvel cinematic one, and to use any and all Marvel characters they pleased, regardless of which film studios own the rights to which characters at the moment.

So each episode—er, issue of SHIELD features at least one major guest-star, and, like a TV show, each individual unit is structured as its own discrete story, albeit one that continues a single narrative thread forward.

As for that structure, there is a single, steady lead character in Coulson, and a consistent supporting cast (Fitz, Simmons, May and Maria Hill) and a storyline about an invading magical force with designs on conquering Earth, but there are different missions and conflicts within each issue, along with different superhero guest-stars (issues #1 and #6 are both particularly full of them).

Likewise, the series has a single writer in Mark Waid, but each individual issue has a different guest-artist, and these tend to be some rather high-quality, “name” artists: Carlos Pacheco, Humberto Ramos, Alan Davis (inked by Mark Farmer, of course), Chris Sprouse, Mike Choi and Paul Renaud.

Waid is, of course, a perfect writer for Coulson, given what relatively little we know about him from the films: That he’s a die-hard superhero fan. In a nice, sharp, three-page intro, Waid introduces us to life-long superhero fan Coulson, who studied super-people since childhood for fun, and eventually got himself a job where a deep well of such trivia is indispensable. He is now SHIELD Special Ops Supreme Commander.

“It’s fun when your hobby becomes your work,” Coulson remarks dryly in the first issue. I imagine Waid would agree.

In that same issue, Coulson describes that job as a matter of “choosing the perfect bullets,” which is half of the reason this collection is titled thusly, and is a premise that allows him (and thus Waid) to mix and match characters on an issue by issue basis. The result is maybe the perfect gateway comic to the Marvel comics universe…at least in theory.

Say you watch a Marvel movie and then start watching Agents of SHIELD. You look for a comic like that, and find this. It’s got many of the same characters, even if they now wear black and white spandex SHIELD uniforms, and then you see Blue Marvel, Valkyrie, Black Knight, The Vision, Hyperion and The Hulk all fighting the same threat in an issue…and Luke Cage, Captain Marvel and Beast at The Thing’s poker game…and so on.

As for the other half of the reason it’s called “perfect bullets,” it ties to the conflict running through the six issues.

The first and sixth chapters introduce Coulson and the series premise, as well as the threat and the way in which the threat is ultimately dealt with (although not every question about it is resolved, so perhaps it will continue to be explored in the future). These are also the ones most full of guest-stars. In the case of the first issue, they are mostly just various superheroes called in to hold the line, and a pair of specialists. In the case of the sixth, these include cameos by heroes all over the world, a new version of the monstrous “Howling Commandos” chosen for their barely functioning brains (Hi Man-Thing!) and an out-of-left-field supervillain whose pants I would like to discuss further at a later date.

Those in between are more character specific, and actually act as something of a character study of those specific characters, using their interactions with various members of the recurring cast to define them.

As mentioned in my review of Ms. Marvel Vol. 3, which collected SHIELD #2, that issue has Coulson and Simmons teaming up with Kamala Khan. It’s followed by one in which Coulson, super-obscure villain Pavel Rasputin (formerly Pavel Plotnick) and Spider-Man try to navigate Doctor Strange’s home when Strange is off-plane (By the way: Alan Davis Spider-Man!); one in which The Invisible Woman gets called in for a mission only she can accomplish; and one in which Scarlet Witch joins Fitz and May as they investigate mysterious attacks on all of the world’s mystics (allowing for more cameos, like Satanna, Son of Satan, Wiccan and so on). I like Scarlet Witch's pink winter coat she wears when they journey to the Antarctic in this issue.
The art-work is uneven by design, of course, and because that un-evenness is built into the book–it is as much a showcase for the guest-artists as it is for the guest-stars, as I mentioned–it’s not so bad. Sure, the artists aren’t particularly chosen for their stylistic compatability with one another (no one’s going to mix up Humberto Ramos and Alan Davis, for example), but the only place this is really noticeable is in the recurring characters.

Likenesses are always a tricky proposition in comics, and how closely the characters resemble the actors who play them on TV tends to vary widely from artist to artist, although most of them seem to have Clark Gregg’s face down pretty well. (I kind of hated Choi’s depiction of the dread Big Bad when he revealed him on a last-page splash in #5, but Renaud’s depiction of said evildoer looks much better in #6; certain characters just don’t work when an artist uses digital effects to create them rather than plain old pencil and ink…or their digital equivalent, I guess. That guy is probably going to be one of the top three most difficult Marvel characters to translate to film).

I’ve never watched an entire episode of the show (just bits and pieces over the shoulder of a friend who watches it) nor had any real interest in doing so (although I got pretty excited when I heard Cobie Smulders say the name “Man-Thing” in one of those bits), so I guess I can’t say with any certainty if this is a good comic for people who like that show.

But all on its own? Yeah, it’s a pretty good comic. And, as I said, theoretically at least, it is an excellent gateway into the wild, weird world of the Marvel (comics) Universe, complete with all it’s most recent changes (Thor being a lady, The Falcon being Captain America, etc).

Actually, I may start watching the show if they introduce Agent Jeremiah Warrick to it. He certainly has a compelling look to him…
...I'd post a panel of him here, but it would genuinely spoil a fun surprise, and I wouldn't want to do that.

By the way, the very first panel of the collection reveals the fact that Coulson is from Ohio. Now, where in Ohio, exactly? This will bug me until I find out:
My favorite part of that image, however, is that Coulson apparently has a signed poster of the Golden Age Namor, The Sub-Mariner, reading "Sincerely, Prince Namor The Sub-Mariner." It's hard to imagine this guy signing posters for fans, you know?

On the other hand, his hand-writing looks exactly like the writing on the Captain America and Bucky poster, so maybe The Invaders just had a press agent sign all of their posters for them...

**********************
Finally, I just thought this was kind of neat:
With all of the world's sorcerers taken out of commission, Coulson needs to find a way to enter a magical dimension using technology, and this is what SHIELD comes up with. I don't know if I've seen this before–it seems obvious enough a visual that I feel like surely someone must have thought of it by now–but it struck me as pretty clever.
Posted by Caleb at 10:51 AM

This actually sounds pretty good. I have the one with Kamala in it, and it was excellent, but for one reason or another I just never picked up the other issues. I may have to rectify that.

William Hope Hodgson had an "electric pentacle" in his Carnacki stories, although that used fluorescent tubes.