All-Star Section 8 #5 (DC Comics) Well now I understand why they were being so coy with who, exactly, the special guest-star in this particular issue of the six-issue miniseries is, while those in the first four were prominently depicted on the covers and mentioned in the solicitation copy. The turn of the first page of this issue, which reveals the main guest-star–there are actually three of them, not counting the tiny cameos of The Spectre, Doctor Fate and Deadman in the background of DC heaven–is by far the biggest surprise of the series so far, and one of the bigger surprises I've seen in a comic in...I don't know how long.

Not precisely that this particular character shows up in the pages of a Section 8 miniseries, of course, but this particular character's extremely unusual...depiction. In addition to the trio of DC guest-stars, Sixpack is also faced with the dead members of the original Section 8 line-up (that is, all of them, except for himself, Bueno Excellente and Dogwelder I) in Limbo.

I hesitate to say just about anything about this issue, for fear of ruining the surprises. Two of the guest-stars should be quite unexpected, while the other is one that Garth Ennis and John McCrea have a fairly long history with...and they present two of the very best consecutive panels featuring that character in maybe ever.

For all the out-and-out craziness of this issue, most of which consists of an out-of-body experience and journey to the afterlife by Sixpack, the penultimate chapter of the series also gets unexpectedly emotional, as Dogwelder II and Sixpack both have moments of extreme pathos.

But you know what's really sad? That there's only one more issue left to go. I do hope DC can find something else for Ennis and McCrea to team on for them after this...

Batgirl #45 (DC) One of regular Batgirl artist Babs Tarr's specialties is drawing sexy young people, which has served her well during his run on the title so far, as writers Cameron Stewart and Brenden Fletcher have given her plenty of material to work with. This issue, featuring the wedding of Babs' old roommate Alysia to her just-introduced fiancee, is probably the ultimate application of Tarr's ability to draw super-sexy young people. In addition to Babs, Alysia, Frankie and Black Canary, she also gets to draw Babs' date to the wedding, Luke Fox, and special guest-star Dick Grayson.

And goddam does Tarr draw an awesome Dick Grayson. This is maybe the best I've ever seen him look, and Tarr gives him just the right hint of smarm and arrogance that is required for his role in this issue, which is essentially to announce to Barbara that he's totally not dead after all, and that he has feeling for her (I'm not sure how exactly this lines up with the previous issue of Grayson, during which he also showed up to announce to Babs and the rest of the Bat-Family that he and Batman had faked his death because of some goofy plot contrivances that didn't actually make any sense). Seeing how well Tarr draws Grayson here, however, only calls attention to the weakness of his costume design. What are those straps all over his torso for, exactly? His costume's so much busier than it should be. Like, why is his "plainclothes" super-spy uniform so much busier than his old superhero uniform, you know...?

Fletcher and Stewart have essentially presented a kinda sorta, between arc "downtime" issue, even though a major life event for a few of supporting characters occurs during the issue. In the process, they've set up a great love triangle with our heroine at the point.

I'm a little confused as to Luke's place in the Bat-Family, though. Does Dick know he used to be Batwing II? Does He know that Dick used to be Nightwing and Robin? All three were Batman-sanctioned, Gotham City crimefighters, of course, but it's not clear from this issue how much they all know about one another (I never read Batwing, so I'm only familiar with Luke's time in the costume from Batman Eternal).

Batman & Robin Eternal #4 (DC) This issue features a script by Steve Orlando and art by penciler Scot Eaton and inker Wayne Faucher. I'm afraid the book is already settling into the sort of groover where talking about it every week will soon be so repetitive that it will be increasingly tedious for you guys to read what I have to say about it. So, sorry...?

Despite the new creators taking point, this reads just like the previous issues. The script features much more clever dialogue than the average superhero comic, the art is below average to the point that it's not only occasionally messy and hard to read, but panel-to-panel continuity is weak, and a reader may find him or herself visually re-drawing it in their imagination to better live up to the intended action.

Already stuffed with characters–Dick Grayson, bearded amnesiac Bruce Wayne, Red Robin, Red Hood, Bluebird, Cassandra Cain and Spoiler–five more enter the action, including Batgirl and the surviving members of the core cast of We Are Robin.

I'm afraid the narrative is going to be a little too complex, simply because of all the baggage its dragging with it from the home titles of some of its characters. Like, as complex as the current plot may be, having something to do with an old Batman and Robin I case involving The Scarecrow, plus new characters Mother and The Orphan and some kind of "designer human" trade that somehow involves all of Batman's past sidekicks from Grayson to Row, we've also got mentions of Grayson's Spyral status quo and those weird face swirling hypnos or whatever, and the mysterious organizer of the We Are Robin movement phoning in during one panel (which seems to imply that it's Tim, but that's likely just the juxtaposition as anything else). 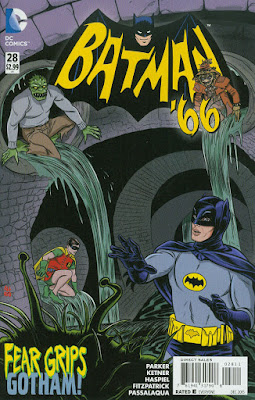 Batman '66 #28 (DC) I hope you're not terribly curious about what it is that Batman is facing on the cover of this issue, as it's not revealed in either of the stories within. That's just a cute cover gag by cover artist Mike Allred.

What you will find within are the debuts of two new '66-ized Bat-villains, one of whose origin we've already witnessed like 20 issues ago.

The first story, written by Jeff Parker and drawn by Lukas Ketner, features the introduction of Scarecrow '66. I really like the design, which is much more rural-looking than the more horrific versions of the character we've seen lately. 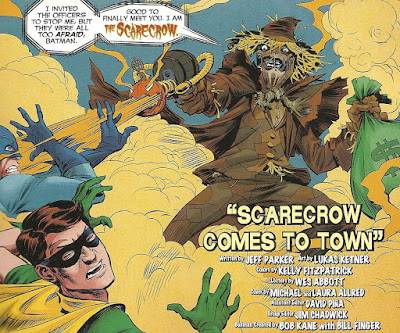 Note the suit that's all patches, the straw hair, the stuffing and the fact that while he does have a rope around his neck, it's not the noose that the modern Scarecrow so commonly wears, but is worn as a sort of makeshift bow-tie.

I especially like his gun, which has a similar rustic look to it, like something that The Green Goblin might have invented were he stuck in Amish country. While The Scarecrow's gimmick is the same–fear gas–Parker's origin for him is based in a weird back story set in the Southern-ish, Appalachian town of Jitters Holler, where Parker and Ketner engage in the sort of "Hillbilly" comedy that wouldn't have been that weird in the sixties or seventies, but is now decidedly passe.

I really dug the designs and art in this story. Check out this page from The Scarecrow's climactic attack, in which he rides a horse-drawn cart...the horse wearing a top hat, frothing at the mouth and making an insane scary horse face worthy of those that Kelley Jones used to draw in The Crusades... 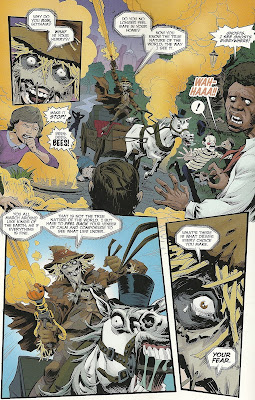 The rest of the issue belongs to a Killer Croc story, written by Parker and drawn by Dean Haspiel. We've previously seen King Tut's henchman Waylon Jones transformed after coming into contact with a magical potion imbuing him with the essence of a Nile crocodile, and here the Dynamic Duo seeks to finally bring him to justice.

Haspiel's simple, stripped-down and super-dynamic art is perfect for superhero comics, and it's honestly a wonder neither of the Big Two have piled enough bags of money atop him to pin him down at a drawing table and force him to produce a monthly super-comic for them.

Killer Croc '66 dresses like a TV show burgular, in a dark turtleneck swearter (I'm half-surprised he didn't have on a cap and a domino mask), and Haspel gives him huge clawed hands and feat and a very prominent jaw with pronounced underbite.

His pixie-esque Robin is perfect, and as great as his images of Croc in battle might be, I really enjoyed just seeing his Batman and Robin running around in goofy costumes; Haspiel pretty perfectly captures the camp of the TV series, without even drawing in a terribly detailed or representational style.

This may have been my favorite scene though: 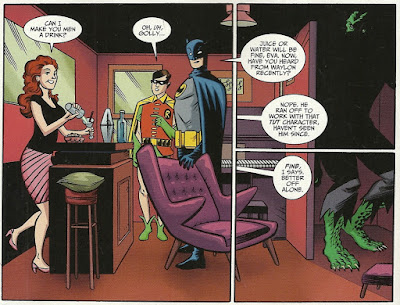 It's a very simple, very basic thing, but I like the way Haspiel has divided the one space into three different panels and thus three different moments. Not only does it guide the reader from moment to moment, but it cuts down having long tails on the dialogue balloons, and thus obscuring more art than necessary. Like I said, it's a pretty simple, basic thing, but it's also kind of brilliant at the same time.

It's going to be a damn shame when this comic goes away, not simply because it's a reliably fun read month in and month out, but because of all the talented folks its hosted in its pages over the last few years.
Posted by Caleb at 10:59 PM