Previously in "The Darkseid War"... 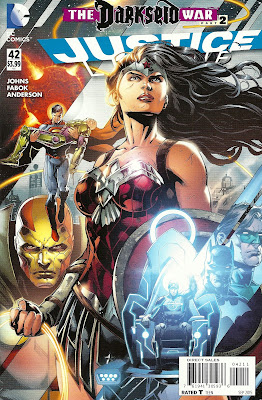 Once again artist Jason Fabok goes for a movie poster-like image, spotlighting many of the characters involved rather than a specific instant or incident within the story. Front and center-ish is Wonder Woman, in her new "Darkseid War" costume (not to be confused with her new Wonder Woman costume). The image is intersected by long, diagonal, panel-like shapes, kind-of-but-not-really containing particular images within them (several figures touch these shapes, but aren't bound to them). We see Apokolips, a perturbed Superman cradling the limp, bleeding body of Luthor (remember, his sister Lena shot him repeatedly at the end of the last issue), the new New 52 Mister Miracle, Metron in his Mobius Chair and then Batman and Green Lantern Hal Jordan, the latter drawn a few times larger than the former for some reason.

Everyone looks really unhappy. I know there's a war brewing and all, but man, being a superhero must be the absolute pits.

A stacked tier of seven horizontal panels, each stretching the width of the page. "Widescreen," they call it. The first (and thinnest) is all black, with the words "The Gods are coming" floating in the middle of it. In the rest of them, we see Superman cauterizing Luthor's bullet wounds with his heat vision, telling Luthor that the bullets are made from a metal he'd never seen before and that his sister shot him.

A still addled Luthor asks where they are...

...and artist Fabok and writer Geoff Johns answer with a full-page splash of a decrepit urban landscape, dotted with large pits from which bright, red smoke seems to seep. "We're on Apokolips," Superman says.

Darkseid looks out the very big window of what I assume is his penthouse office, overseeing the same red-skied, urban hellscape that Luthor and Superman were just taking in. Behind him, two lieutenants talk strategy with him. These are Desaad and Steppenwolf, both of whom have been previously introduced in the pages of Earth 2 and its spin-offs. Desaad now looks like a burn victim with glowing eyes and a hooded cloak. Steppenwolf wears red and black armor, a beard a funny hat and a goofy horned skull belt buckle. He looks a little like a heavy metal fan's idea of a Medieval warrior.

They are pretty dramatic redesigns. 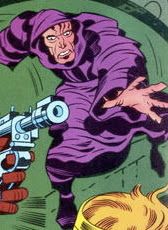 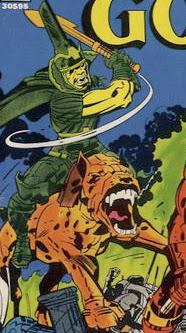 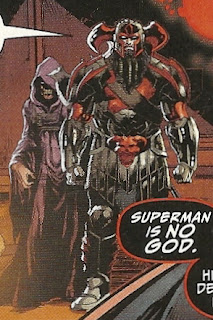 Steppenwolf is all like "I'm going to go kill the hell out of Superman for you, is that cool Darkseid?" and Darkseid's all "No way man, I want his soul."

Darkseid is apparently playing a long game with Superman, intending to corrupt the Man of Steel rather than destroy him outright. This couldn't possibly come back to bite Darkseid in the ass later on.

Meanwhile, back on Earth, Wonder Woman resumes narrating, but she doesn't say anything of real import, merely recapping the events of the previous issue (The Justice League fought Darkseid's daughter Grail, and then The Anti-Monitor and a bunch of shadow demons appeared in the sky).

She and Grail prepare to go at it, but they are intteruped by The Anti-Monitor, who lands between them. He's big, but not as big as the Crisis version; maybe three Wonder Woman's tall...?

She asks The Anti-Monitor what he is, and he responds that he's desperate.

Just then Metron Boom Tubes in and then Boom Tubes out, taking the Justice Leaguers away with him.

We now cut to Athens, which is apparently where Mister Miracle landed last issue, at the feet of Myrina Black and her pet Griffin, Griff. She refers to MM as The Escapist, and he immediately corrects her. Was she expecting The Escapist?

She walks Scot (It's just Scot with one t now, as that apparently sounds more realistic than an alien super-god named Scott with two Ts) through her Myrina Black cave, which is full of tropies like giant skeletons and tanks and suits of armor and gold coins and suchlike.
She explains that she was an assassin for the Amazons, whose mission had something to do with to saving the world from war by killing Darkseid, and she decided to do so by creating an ultimate weapon against him in the form of a daughter, Grail.

Now, I'm no assassin, but if she had Darkseid in the position to, um, make a baby with her, couldn't she have just, like, stabbed him then or something? Wouldn't that be more efficient than raising his daughter to fight Darkseid?

The various players' motivations are all a little unclear here. Her plan, apparently, involved having Grail bring The Anti-Monitor to Earth to fight a war against Darkseid here. (So Grail is on her side, and against Darkseid? So why was she fighting the Leaguers? Shouldn't they all be allies?)

Scot isn't down with the whole let's-have-a-cosmic-war-on-Earth plan, as it could lead to the deaths of billions, so Myrina decides to kill him with a spear. He Boom Tubes away.

This sequence is most notable for some classic Wonder Woman villain name-dropping (Red Panzer, Minister Blizzard) and for the first images of Fabok drawing Griff in his entirety. I'm not the biggest Fabok fan but, again, the guy draws good Griffins.

We meet Metron and the LEague at The Rock of Eternity, apparently, although as Fabok draws it, it's just a dimly lit stone room with a few pillars.

There's a bit of bickering between Green Lantern and Metron, as they've previously met during a kind of dumb Green Lantern franchise crossover storyline. Metron tells the Justice League they should probably collect their friends and get off-planet, as the world's going to get pretty destroyed when The Anti-Monitor and Darkseid start warring there, but they're not having it.

Wonder Woman magic lassos him in an attempt to get information about him, but after a few panels of questioning, it's clear that he doesn't have the answers, but the chair does, and he is compelled to tell her that the only way to get the information she seeks is to "take the chair" from him.

So she yanks him off his chair, and as it begins to Boom Tube itself away, Batman jumps on it and says "ARRGHHHH!!!" while it starts PING-ing. Each PING reveals a new image to him.

Freaking out a little, and realizing he has the ability to answer any question he has, Batman asks who killed his parents (Joe Chill), and then "What's The Joker's true name?"

He gets an answer to that as well, but he doesn't seem to like it–"NO. That's not possible."– but he doesn't share it with the readers. Hopefully Johns does at some point, because that's a hell of a thing to tease, particularly given Batman's response.

By the time the dust settles, Batman has some new, glowing Tron lines on his costume, and a new font; his dialogue bubbles are now the same coloration as those of Grail and Darkseid.

And so ends the second part of "The Darkseid War."
Posted by Caleb at 9:07 PM

I have always liked Geoff Johns work in Green Lantern, but man... this is just so... turgid.

I read the third installment on Wednesday, and I'll be honest, there are a lot of parts about this I like, though some parts fall flat. More explanation might be needed, but it might making the scene more "talky". I think the main reason why I'm enjoying this is that, despite the splash pages, there is a lot going on. There are shifting scenes every page or so and it makes it read like a JL comic instead of a comic where ALL of the JL just fight a villain together for one issue.

Spoiler Alert! The Joker is really...Mothman.