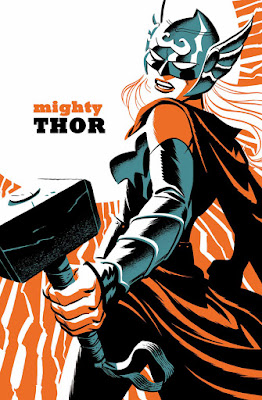 Hey, Marvel is publishing a bunch of stuff in February, too! I won't be buying any of the single issues, because Jesus God, $4 for a Marvel comic book? Never! I'll probably read a bunch of these comics when they come out in trade six-to-12 months after three months from now!

I didn't notice anything too terribly noteworthy this month. The theme for February's variant covers (well, one of the themes) is "Michael Cho draws awesome," apparently, as many of the books have awesome Michael Cho portrait-style covers featuring the title characters, like the one above for The Mighty Thor.

To see the complete solicitations, you can go...well, lots of places. Comic Book Resources is as good a place as any, I suppose. Comics Alliance is better though, as they still give me money to write about comics. 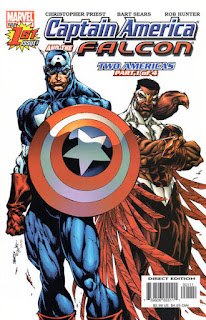 CAPTAIN AMERICA & THE FALCON BY CHRISTOPHER PRIEST:
THE COMPLETE COLLECTION TPB
Written by CHRISTOPHER PRIEST
Penciled by BART SEARS, JOE BENNETT, ANDREA DI VITO, GREG TOCCHINI & DAN JURGENS
Cover by HOWARD PORTER
They’re best friends, teammates, brothers-in-arms — but that bond is tested to the limit when Falcon targets the Rivas drug cartel, and the Super-Sailor known as the “Anti-Cap” sets his sights on Sam Wilson! Can Captain America thwart his dark doppelgänger before Sam Wilson’s wings are clipped? Fingers crossed, because there’s a Mental Organism Designed Only for Killing waiting in the wings, and nobody’s better at stopping him than Cap and Falcon! But M.O.D.O.K.’s not the only big headache on the horizon, with the Avengers about to be Disassembled and all. Is this really the best time for Steve to be kissing the Scarlet Witch? Plus: With the Rivas out for revenge, Falcon may cross a line that could finish one of comics’ greatest partnerships once and for all! Collecting CAPTAIN AMERICA AND THE FALCON (2004) #1-14.
328 PGS./Rated T+ …$34.99
ISBN: 978-0-7851-9526-9

Wait, Christopher Priest wrote a Captain America/Falcon series as recently as 2004...and I didn't know about it? Or did I, and I told myself I would read it in trade, and then forgot too...? Huh. Anyway, I like The Falcon, don't mind Captain America and really like Priest's superhero-writing. The pencil artists seem like a real grab-bag here, though, so maybe this is more of a borrow-from-the-library collection than a buy-for-the-bookshelf-collection... 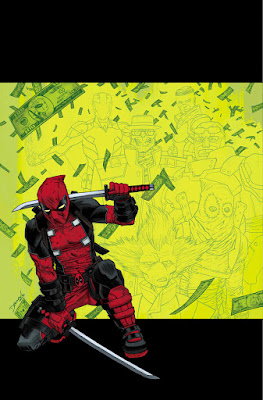 DEADPOOL & THE MERCS FOR MONEY #1 (of 5)
Cullen Bunn (w) • Salvador Espin (a)
Cover by DECLAN SHALVEY
...
Deadpool might be an Avenger now, but he’s also got his own private team of mercenaries…the legally-cleared-to-be-called MERCS FOR MONEY! Got a problem you can’t solve on your own and a pile of money you’d like to be rid of? Just call Deadpool, Stingray, Massacre, Solo, Foolkiller, Terror and Slapstick and watch as that problem is shot, stabbed, eviscerated, pulverized and generally made bloody!
32 PGS./Parental Advisory …$3.99

Wait, "merc" is short for "mercenary," and "mercenary" means "someone who does something, especially fight, for money." So isn't "Mercs For Money" kind of redundant, or is meant to echo "Heroes For Hire"...?

Not much of a Deadpool fan, and can't remember anything Bunn-written I've read that I liked, but I kinda like Stingray and Foolkiller (although I didn't recognize him on the covers, so I guess this isn't the same Foolkiller I'm thinking of, which would be the original one from the pages of the late Steve Gerber's Man-Thing in the 1970s), so this might be of some interest...


DOCTOR STRANGE #5
JASON AARON (W) • CHRIS BACHALO (A)
Cover by KEVIN NOWLAN
VARIANT COVER BY MICHAEL CHO
• The Witchfinder Wolves are here and Doctor Strange is in trouble.
• The Empirikul is coming, Magic’s days are numbered and Strange is not ready!
32 PGS./Rated T+ …$3.99

The cover offered no clues as to what "The Witchfinder Wolves" are, but I'm really hoping their a pack of talking wolves that are dressed like Vincent Price in The Witchfinder General: 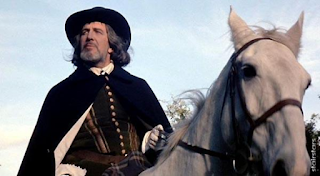 I would say that's incredibly unlikely but then, on the other hand, this is a Jason Aaron-written comic, so really, nothing's too unlikely, is it? 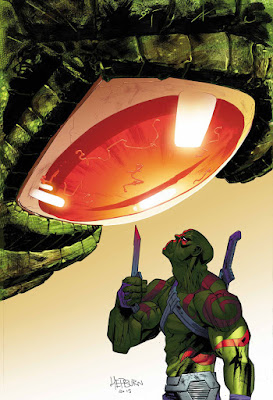 DRAX #4
CM PUNK & CULLEN BUNN (W) • SCOTT HEPBURN (A/C)
DRAX AND THE TEMPLE OF FOOM!
EARTH’S TOUGHEST COMPETITOR CM PUNK CONTINUES HIS GALAXY RUMBLING DRAX SERIES!
• DRAX faces FIN! FANG! FOOM!
• The fiend kidnapped children and put their little hands to work digging. But for WHAT?! Prepare to be SHOCKED! And AWED!!!
• Drax is ready to PUNCH out an escape route, barring any WEIRD mystical surprises. (FYI, we consider a dragon in hot pants to be pretty normal, so what could weird possibly even mean???)
32 PGS./Rated T+ …$3.99 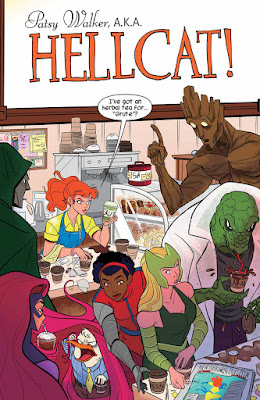 If Patsy Walker, Hellcat is half as good as its covers, it's going to be a hell of a comic book...


SQUADRON SUPREME #4
JAMES ROBINSON (W) • LEONARD KIRK (A)
Cover by ALEX ROSS
...
Things Get Weird!
• The Squadron descends into the newest, weirdest corner of the Marvel U!
• But how many of them will make it out?
• Plus: A beloved Marvel character returns amid much pomp and FANFARE!
32 PGS./Rated T+ …$3.99

I feel like the word "fanfare" is a clue that I am supposed to recognize as to the identity of the "beloved Marvel character," but I'm drawing a blank. I am dumb. 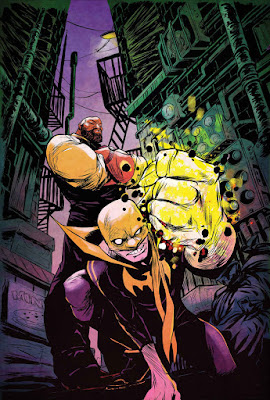 POWER MAN AND IRON FIST #1
DAVID WALKER (w) • SANFORD GREENE (a/C)
...
THE ORIGINAL HEROES FOR HIRE, BACK ON THE CLOCK!
We KNOW you’ve been waiting to see LUKE CAGE and DANNY RAND back together and back to STREET-STOMPING basics! POWER MAN and IRON FIST are tracking a mystery with all the ingredients of a classic Heroes-for-Hire tale. Expect old friends, hired goons, crime lords, weird magic, plenty of power, a flurry of fists and as much bromance as you can handle! It’s Power Man and Iron Fist reunited, and writer DAVID WALKER and artist SANFORD GREENE are making it feel so GOOD!
32 PGS./Rated T+ …$3.99

I am looking forward to this. I hope it's as good as it is in my imagination. 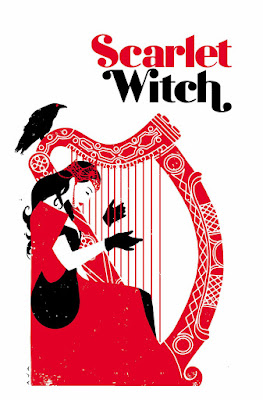 SCARLET WITCH #3
JAMES ROBINSON (W)
STEVE DILLON (A)
Cover BY DAVID AJA
...
• A magical curse has befallen the Irish countryside and only the SCARLET WITCH has the cure!
• A powerful new magician by the name of the EMERALD WARLOCK has his eye on Wanda…but is he friend or foe?
• Wanda discovers that there is much more to her family history than meets the eye…
32 PGS./Rated T+ …$3.99

I kind of think having The Scarlet Witch encounter a character named he Emerald Warlock is both dumb and awesome at the same time...which is kinda what I want from my superhero comic books. 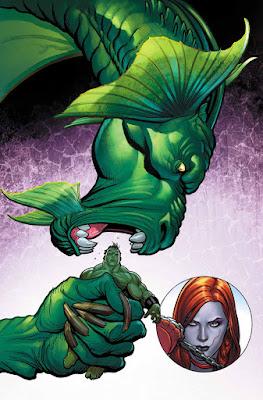 Also, that's at least two Fin Fang Foom appearances. Too bad he's not in all of February's books. Then it could be Fin Fang Foom February...
Posted by Caleb at 4:42 AM

FANFARE right away made me think of MARVEL FANFARE. Did they introduce any one-off characters like MARVEL PREMIERE did?

…and can't remember anything Bunn-written I've read that I liked…

Have you never read SIXTH GUN?

Caleb, please. We KNOW comics are expensive and that you'd rather read stuff in trade. That doesn't have to be thing you mention in every post.

(and the "Fanfare" reference obviously refers to an Al Migrom team-up...)

I did some research for a podcast that led me to Patsy Walker, and I tumbled down a rabbit hole of fascination with that character and her weird world. I hope this book is a huge success that gets Marvel to do a reprint volume of her Golden/Silver Age humor stories, which are a gas. I'm so into her right now I'm even paying $4 for a monthly comic book (minus a hefty discount, at least.)

"CAF" as Captain America & The Falcon was called in its day was unreadable during the brief Bart Sears run (4 issues?) because the artist basically ignored the scripts and indulged his worst excesses. Then Joe Bennett came on and the book was great for a half dozen or so issues. Then Avengers Disassembled happened, wrecking Priest's long game and bringing on fill-in artists until the book ended. The only time I ever liked Falcon in the comics was Priest's hard-edged conspirator take, and the editors wanted to continue the book as a solo title for the character, but Priest balked and Cap was relaunched alone in a proper Marvel Universe series under Brubaker & Epting.