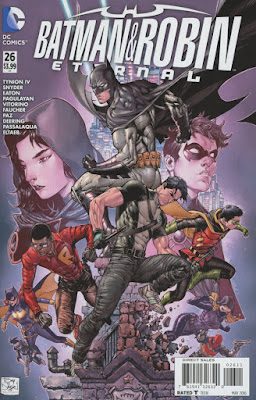 Batman & Robin Eternal #26 (DC Comics) Well, this is it–the final issue of the weekly series, over-sized at the $3.99/38-page price point to allow enough room for a climax and a denouement. Regarding that climax, it's pretty much exactly what the last few issues have pointed towards. Mother puts a knife in Harper Row's hands and asks her to kill the captive Cassandra Cain. She decides not to, and so the pair team up with Dick, all the Robins and various allies to fight Mother and her Orphans.

The denouement is a bit more interesting. It jumps ahead a few months, after the events of Batman #50 (i.e. Bruce Wayne has gained his brain back, and is Batman once again). Both Haprer and Cassandra decide what they want to do next with their lives.

Harper decides to at least temporarily suspend her activities as crimefighter Bluebird (As much as I hate d her dumb costume and Cable-sized electricity guns, I liked the character, and liked her particularly as a foil to Tim Drake and/or Stephanie Brown, the latter of whom is her roommate. I was kinda hoping for a Teen Wonders comic at some point, which I guess Detective Comics will kinda sorta be becoming, although sans Harper, and kind of assuming she would be part of the upcoming Batgirl and The Birds of Prey, which no longer seems to be the case).

Cassandra decides to become a crimefighter–she will be appearing in the upcoming, James Tynion-written Detective Comics–and she takes maybe the worst superhero codename she could, given the events of this series: Orphan. Okay, yes, "Batgirl" and "Batwoman" are both taken, but her post-Batgirl codename "Black Bat" is still available. And I'm sure if we put our thinking caps on, we could come up with something else that's better than Orphan, which sounds more like the name of an X-Men character than a Gotham City vigilante. Blackbird? Black Robin? Nightwing?* Midnight? Lady Bat? Killer Bat?** The Blue Bat? Silent Knight?

Orphan was the name of her abusive, evil, asshole father David Cain, and the name used by Mother's top assassins. Cassandra rejected her father and Mother...so why would she name herself after them? Other than the fact that "Batgirl" is already, taken, of course.

Maybe this name is not final, and she'll reclaim her Batman, Incorporated identity of Black Bat in future issues of Detective...

This issue was scripted by Tynion, and drawn by four pencilers and four inkers, none of whom do all that noteworthy a job.

Despite its overall mediocrity, occasional all-around bad issues, I'm still sorry to see the book ending. I like a lot of these characters, and it's always nice to know you have at least one superhero comic waiting for you at the shop every Wednesday. 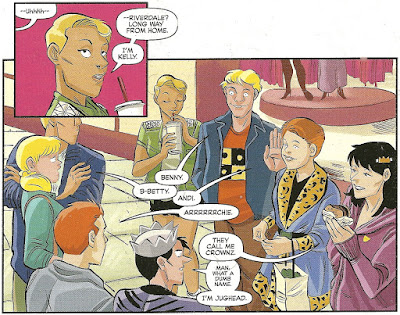 Jughead #5 (Archie Comics) Wow, five issues already? Jughead may have convinced a handful of his fellow students that the new principal is systematically transforming their high school into some sort of weird training and recruitment agency for some sort of sinister paramilitary organization, but they prove unable to convince any adults that this is, indeed, the case.

So Jughead and the gang convince Reggie Mantle to drive them to nearby Sunnyside, where they all encounter gender-flipped versions of themselves while trying to do recon on Principal Stanger's past conquests. This issue's dream sequence dusts off the Archie superhero characters, presenting them with evil versions of themselves that look an awful lot like their Utlimate equivalents. If Jughead's Captain Hero identity fighting an evil version of himself with five o'clock shadow in a junkyard is to subtle a superhero allusion, the last page sure isn't.

Chip Zdarsky and Erica Henderson continue to do what I would have told you a year ago was impossible: Make Jughead a creative, compelling and honest-to-God funny comic book.

Saga #35 (Image Comics) Hey, Lying Cat isn't the only lying cat! As much as I liked seeing another lying cat, this one dressed up like a king because why not?, I think this is probably my favorite part of this issue: 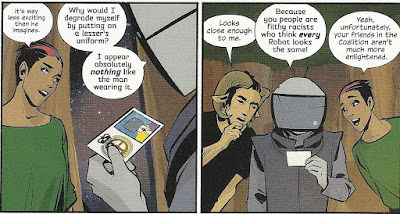 This was a pretty funny issue, and Fiona Staples fills it with excitingly strange little details and design work. Nice use of giant, weaponized water bears, for example; water bears being nature's most horrifying creation.

*I know, I know; Dick is reclaiming that name during DC's "Not a relaunch!" relaunch, "Rebirth." Otherwise, having her take on his old, unused superhero codename would make sense, given how much time she hung out with him throughout this series.

**Why not? Gotham's already got a Killer Moth and a Killer Croc.
Posted by Caleb at 9:35 PM