A few thoughts on Batman and The Signal #1 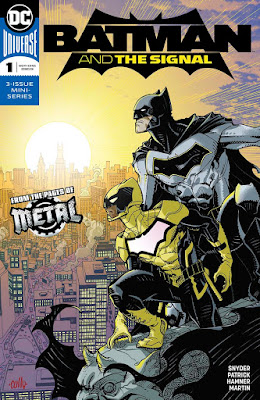 *The cover proclaims that Batman and The Signal is "From The Pages of Metal". Is it? If so, a connection between this first issue and the first four issues of Metal isn't evident, although I suppose it's possible one of the last two issues of either miniseries will provide one. The character Duke Thomas was rather prominently featured in the prequel one-shots leading in to Metal, but, by that standard, one could say that any comic featuring any character that appeared in Metal is "From The Pages of Metal."


*The three-issue miniseries is being co-written by Scott Snyder and Tony Patrick. The latter apparently came out of one of DC's talent development workshop program thingees. He wrote a Duke Thomas/Jason Todd team-up in this year's New Talent Showcase anthology book that was pretty okay. The artist is Cully Hamner. He is awfully good at drawing comic books.


*The issue opens with Duke narrating, "I just want to say, I know what you're thinking," while the artwork depicts a long dining room table set for seven, with Batman's various lieutenants--Nightwing, Robin, Red Robin, Red Hood, Batgirl, Batwoman, Batwing, Orphan--take their places at the table. And that's without counting other members of Batman's "Gotham Knights" team from Detective Comics, like Azrael, Spoiler and Clayface.

"There aren't even any good names left," Duke says, articulating the one problem I have had with the character to date (Hell, they've even started using the terrible names, like "Orphan").


*Duke has super-powers, of a kind. He describes his powers like this: "I see light differently than other people. Can see where it's been a few minutes ago, and sometimes...where it's going to be, which gives me an edge in most fights." Hmm. The second half sounds a bit like Cassandra Cain's ability to predict movement, but it's very vague as described here, and Duke makes it sound like he and the rest of the Bats are still trying to figure out how it works exactly.


*After the dream sequence, there's a fight sequence, involving Duke and one of several, new-ish metahuman teens that have emerged lately, of which he may be one. At its conclusion, the civilians all gather around and start yelling at him about how bats don't come out during the day, and that he should be in his cave or wherever, and so on. They're...not wrong.

While the premise for the series, and Duke's niche in the Bat-family, seems to be that he's the "day-time Batman," it does sort of break the idea of Batman in Gotham City, if one thinks about it too long. That is, it's a lot less believable that there's a squad of vigilantes that work in the daylight, that pass through crowds of civilians and commuters, than it is that they only come out at night, you know?

I suppose he does have some powers, and if they were of the sort of, say, The Flash or Green Lantern or Gotham Girl, it might be interesting if Gotham City suddenly had a superhero that protected it publicly in the day time the same as Metropolis or Central City or other DCU cities, while Batman and his team protected it at night, but Duke's powers aren't of the sort that are noticeable enough that someone seeing him in action would classify him as a superhero, rather than a vigilante.


*Commissioner Gordon's parting joke about the sun was funny, I thought.


*Duke hangs out with Izzy and Riko, both members of his Robin cell from the short-lived We Are Robin, at one point. He is apparently dating the former, although I don't know if this is new information or not.


*Batman gives Duke his own little mini-Batcave, with a lame name, "The Hatch." It's behind a secret passage in the Lucius Fox Community Center, where Duke used to volunteer with amnesiac, bearded Bruce Wayne.


*And then we finally get to the name, "The Signal." Now, I've disliked the name from the start, in large part because it is simply a random noun, not unlike, say, "Oracle" or "Orphan" (although, in the case of the former, it does refer to her purpose in a poetic fashion). Additionally, the word "signal" already has a role in the Batman milieu, as in "the batsignal." It's difficult to thin of the word "signal" in relation to Batman at this point and not think of the batsignal.

Well, here's how Duke explains it:


I've been thinking about it. My mother, she's a social worker, and she always goes out first thing in the morning to meet her clients.

She says it's the best time to see things clearly. To see them in a new light.

She considered herelf the first knight on the battlefield, defending the needy and all that, I guess.

And another word for the first knight out there is...'Signal.'

Okay, that sort of works, as it plays into Batman's appellation as "The Dark Knight" and Red Robin's "Gotham Knights" team in Detective. To a degree, it even matches Duke's look, as there is something very knight-like about his helmet and visor, and his costume certainly looks a lot more like a suit of armor than many of the costumes worn by his peers.

There's still the problem of the "batsignal" connotation, though, and, well, Duke does have bat-ears and bats on his face and chest. The costume design--and, increasingly, I'm convinced his costumes were designed long before any real consideration was made for his name--all that implies that there has to be a "bat" in his name, somewhere.

Finally, there is the fact that the script itself confuses the symbolism a bit, as during the earlier fight scene, Duke cajoles himself to "pick up the signals"...does "signal" refer to the first knight on the field, or the signals he sees with his powers...?

I think Signal, as the name of a knight-derived superhero, would work just fine in pretty much any other milieu, but it seems pretty garbled in the context of the Batman milieu (Would it have been better to repurpose an old name not being prominently used at the moment, like Knight, The Shining Knight or White Knight?). As the name of a hero with signal-catching super-powers, well, I think "Sonar" or "Echo" is more obvious, given the fact that he's dressed like a bat. It's a pretty dumb name, granted, and sounds kind of X-Men-esque, but it's no dumber than "The Signal," and it matches his costume and powers.