Reading through the solicitations for comics Marvel plans to publish in April of this year was even more strange and depressing than taking in the new solicitation copy usually is, because I did so shortly after reading Brian Hibbs' latest "Tilting At Windmills" column about how Big Two business practices hurt the retailers that support them. The bit I found most shocking was when Hibbs wrote that of 1,106 periodical comics solicited in January, only 454 were new comics. The remaining 600 and change? All variant covers.

And what's the first item on the list of Marvel's solicits? 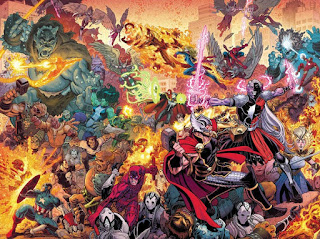 Now, look--Jason Aaron is a pretty good comic writer. I've at least liked everything of his I've read, and I don't recall hating or being disappointed by any Aaron-scripted comic (although there were some issues where the art was sub-par). And Russell Dauterman is a great comic artist. I really enjoyed their collaborations on Thor...at least until I got so confused by the relaunches and renamings that I got too lost to keep reading it.

But whatever the quality of the story between the covers, this event--which I imagine they have been building towards forever, since it at least feels like Aaron has been writing Thor comics since I was old enough to shave--I think we can all agree that this is just too big for a big event series. I mean, what's that? Seventeen covers? For one issue? And it's not a one-off, special event. That's the first issue of sprawling, dinosaurian event.

In addition to the $6 first issue, this month also sees the release of the second issue, which will cost you $5. So if you're a reader, you're already dropping $11 on just the first two chapters of the main storyline. But, as there has been for every line-wide Marvel event series since the first Civil War, there's also an accompanying miniseries, War of the Realms: Journey Into Mystery launching; that will run five issues. And there's a second, accompanying mini-series, War of The Realms: War Scrolls, although that will last just three issues. But wait! Then there are several character-specific miniseries, as there were for such past-events as World War Hulk, including ones starring the Uncanny X-Men and The Punisher. And, of course, many of the individual titles will feature issues that tie directly into the event.

Now, event fatigue means there are relatively few readers will actually buy and/or read all of this as it's being published, but Marvel has made it so big that almost any Marvel reader will be hard-pressed to avoid it, and even just dallying in it--say, reading the main series and maybe a special miniseries or two featuring your favorite characters--will get very expensive very fast.

And my God, the retailers! How do you stock this goddam thing?

Anyway, War of The Realms strikes me as far too big, even compared to previous Marvel event series, but since I read Marvel almost exclusively in trade collections, I'm generally an event or two behind. Like, I haven't read that last one, with the Infinity Gems yet. Is War of The Realms as significantly larger than than that one as it looks to be...? 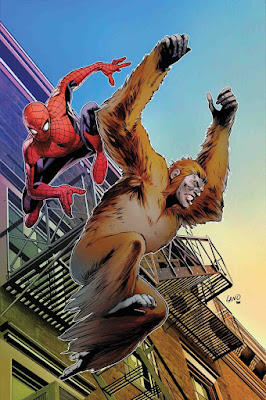 That...is not a very good drawing of The Gibbon, Marvel. Why do you guys keep hiring Greg Land to poorly draw things for you? I suppose it's good that he's just handling the cover, and not the interior art. 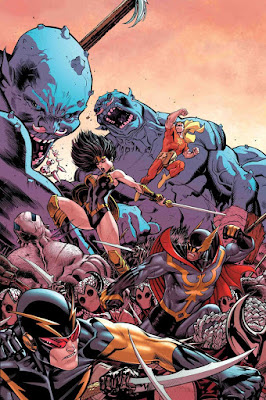 AVENGERS #18
JASON AARON (W) • ED MCGUINNESS (A/C)
...
WAR OF THE REALMS TIE-IN!
See the greatest heroes of Washington, D.C., in action as the War of the Realms comes to the nation’s capital. Who needs the Avengers when you’ve got the all-new Squadron Supreme of America? But who are these mysterious new heroes, and where did they come from? Only Agent Coulson knows.
32 PGS./Rated T+ …$3.99

Wow, they are leaning into the Squadron Supreme-as-the-Justice League super hard on this cover; it looks like McGuinness drew Batman first, for example and then went back and re-did his costume so it's a Batman-shaped Nighthawk. 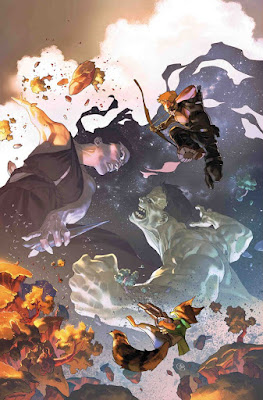 When I first saw this cover for Avengers: No Road Home, I thought Rocket Raccoon was a new anthropomorphic fox character, but then when I saw what title it was attached to I realized that it was actually just a Rocket with a very fluffy tail. 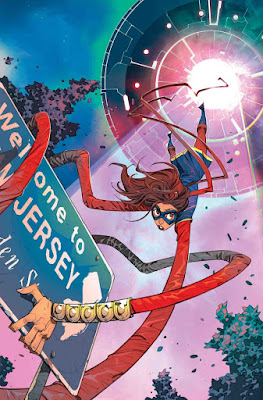 MAGNIFICENT MS. MARVEL #2
SALADIN AHMED (W) • MINKYU JUNG (A)
Cover by EDUARD PETROVICH
VARIANT COVER BY Afu Chan
Ms. Marvel is reeling from a devastating loss, but with an alien invasion ravaging Jersey City, she’s not going to have much time to grieve!
Even if Kamala saves her hometown, will her family ever be the same? And what’s all this business about a “Chosen One”?
32 PGS./Rated T+ …$3.99

I'm not sure if that is the Petrovich cover or the Afu Chan cover, but I really like it.


MIGHTY THOR 3D #1 (POLYBAGGED)
JASON AARON(W) • RUSSELL DAUTERMAN (A/C)
Jane Foster brings the thunder like you’ve never seen it before — in eye-popping 3-D! When Jane lifts the mystic hammer Mjolnir, she is transformed into the Goddess of Thunder — the Mighty Thor! Her enemies are many, as Asgard descends further into chaos and a looming war threatens to spread throughout the Ten Realms. Yet this new Thor’s greatest battle will be against a far more personal foe: the cancer that is killing her mortal form. It’s a legend in the making as the multi-layered writing of Jason Aaron and the larger-than-life artwork of Russell Dauterman leap off the page in three dimensions! Polybagged with a pair of 3-D glasses! Reprinting MIGHTY THOR (2015) #1.
40 PGS./Rated T+ …$7.99

Oh yeah, this is the Thor comic by Aaron and Dauterman I was reading until it got relaunched like 12 issues in or something. I never did find out what Nick Fury Sr. Whispered to The Odinson to render him unworthy...

I remember liking this a lot, although I don't think I would want to re-read it in this format, as 3D is almost always a real pain-in-the-ass to read. And while I know they had to do something to keep the glasses in the comic, with all this talk of the relative health of the direct market I did experience an involuntary shudder when I saw the word "polybagged" up there... 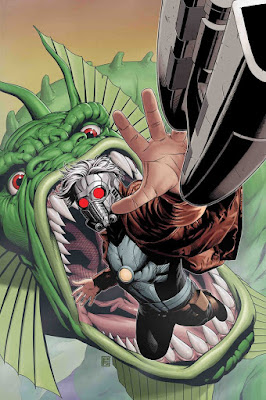 OLD MAN QUILL #4 (OF 12)
ETHAN SACKS (W) • IBRAIM ROBERSON (A)
Cover by JOHN TYLER CHRISTOPHER
FIGHT FOR YOUR LIFE, PETER QUILL!
Captured by TASKMASTER, PETER and the GUARDIANS find themselves in the pits of his battle arena!
So if Peter wants to save Earth…first he’s got to defeat FIN FANG FOOM!
PLUS: The return of a fan-favorite WASTELANDS character!
32 PGS./Parental Advisory …$3.99

As with Namor, Fin Fang Foom is one of those Marvel characters that I am patiently awaiting making his Marvel Cinematic Universe debut. There was a moment while watching Into The Spider-Verse when I got unreasonably excited, thinking Spidey was fighting a version of FFF, but it turned out to just be a bigger, more goblin-y alternate reality version of Green Goblin.

I was hoping he would at least appear at the opening of an Avengers movie, as something for the team to fight before the plot kicks in, but maybe they'll get around to an Elsa Bloodstone movie eventually, and she can fight him and some other cool Kirby monsters. Or hell, maybe he'll be in the Black Widow movie; she'll need something Marvel-ous in the villain department to keep it from just being a generic spy movie...

Anyway, to reiterate: Fin Fang Foom is cool and I like him.


THE PUNISHER VOL. 2: WAR IN BAGALIA TPB
Written by MATTHEW ROSENBERG
Penciled by SZYMON KUDRANSKI
Cover by GREG SMALLWOOD
The Punisher is extradited to the worst place imaginable: Bagalia, Hydra Nation itself! Frank Castle has been in jail before, but never one like this — on an island country packed to the gills with super villains! But just as the Punisher enters the lion’s den, Baron Zemo makes his move! Zemo plans to turn Bagalia into a legitimate nation, but what chance does the rule of law have in a land of outlaws? And can Zemo’s lofty goal withstand the Punisher’s determined fury? Frank gets loose on the streets — but even for someone as notoriously hard to kill as the Punisher, an entire island of villains just might do it. And desperate times for Zemo call for some truly desperate measures! Prepare for open war on the streets of Bagalia! Collecting PUNISHER (2018) #6-11.
136 PGS./Parental Advisory …$17.99
ISBN: 978-1-302-91348-9

Wait, what? Rosenberg is still writing Punisher...? I read both volumes of Punisher: War Machine--which were labeled Vol. 1 and Vol. 2--and the last one ended with a little blurb saying the Punisher would return with a new #1. And he did, but the writer is the exact same as the writer of the previous Punisher series? THEN WHY THE FUCK DID YOU RELAUNCH IT MARVEL?!

God, keeping up with Marvel can be exhausting...


This is curious. As you likely all already know, the True Believers line are $1 reprints of old Marvel comics that generally serve as loss-leading ads to collected editions, and/or to get readers excited for some event going on in the publishing line. For example, January's True Believers issues are all devoted to reprints of old Conan comics, to herald the return of the license to Marvel (And I've enjoyed the hell out of them, sexism and racism aside). April's theme seems to be various Avengers-related comics, but why are two of them classified? Would their very existence somehow spoil the events of War of The Realms or The Avengers or something...? Or maybe the upcoming Avengers movie...?

My guess is that Namor and Fin Fang Foom were both sold as part of the Fantastic Four license, so we won't see either till it expires.

I believe the Green Goblin that showed up in Spider-Verse was his Ultimate universe depiction.