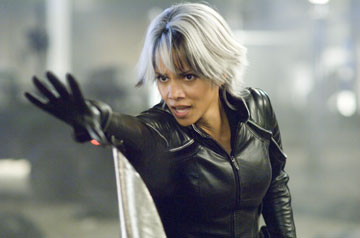 Well, X-Men: The Last Stand is the #1 movie in America, unsurprisingly. What is surprising is how much money it made while on it’s way to the top spot, however—an estimated $120 million plus on it’s opening weekend, the trades are reporting.

Critics have been fairly kind to the film, apparently because they were expecting it to suck much, much harder under the guidance of Brett Ratner (Every review I read, actually, took time to talk about how much everything Ratner’s ever been involved with has been abysmal and how it’s a miracle this didn’t suck just as badly). The Village Voice’s Dennis Lim went so far to say that not only is the franchise critic-proof, it “might even be director-proof.”

What I haven’t heard any critics point out was how great a film X-Men III was considering it was the third film in a comic book superhero movie franchise.

Were there too many characters and not enough time to focus on them? Sure. Was there a lot of decent action, but no really compelling set-pieces akin to those in the previous two films? Yes. Was Halle Berry still in it? Uh huh.

But, compare it to the only other comic book superhero franchises to make it all the way to part three, and it’s consistency of aesthetic, cast, integrity and story seems downright remarkable.

In Superman III , the actors playing both the hero’s love interest Lois Lane and villain Lex Luthor from the previous two installments essentially sat the movie out. Christopher Reeve was left to court second-choice flame Lana Lang and contend with Robert Vaughn’s “Ross Webster,” a new character who was, for all intents and purposes, simply an off-brand Luthor. Plus, in the franchise’s shark-jumping moment, Richard Pryor is introduced as first a foil and then an ally of the Man of Steel’s.

Other than Reeve’s “Evil Superman” act and fight with himself in the junkyard, is there anything in this film you wouldn’t rather have forgotten?

Then there’s Batman Forever , in which visionary Tim Burton handed the franchises’ reigns to the man whose very name makes comics fans avert their eyes, do the sign of the cross, and whisper a quick prayer: Joel Schumacher. Val Kilmer stepped in to fill Michael Keaton’s boots, cape and cowl. The playground goth sets and gray and black palette gave way to garish amusement park neons. Plus, Jim Carrey as a red-headed Riddler! Tommy Lee Jones chews scenery out of both sides of his mouth as Two-Face! And the introduction of Chris O’ Donnell’s Robin.

Compared to those two films, the third X-Men film is the Citizen Kane of third-installments.
Posted by Caleb at 9:41 AM