A few thoughts on Batman and Owlman, in light of Batman Vol. 2: City of Owls and Forever Evil 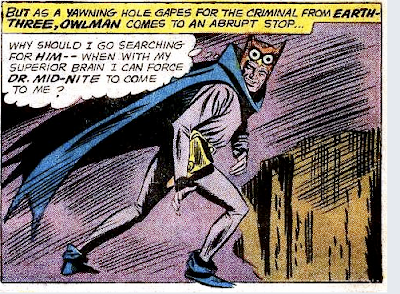 In 1964, the Justice League of America creative team of writer Gardner Fox and artist Mike Sekowsky introduced The Crime Syndicate of America, villainous counterparts to the JLA from the parallel earth of Earth-3, where the events of history were reversed in more-or-less random ways (In Earth-3's version of the Revolutionary War, for example, British colonists declared their independence from America, and so on). Therefore rather than having a team of superheroes, like the League's Earth-1 had, Earth-3 had a supervillains, who were a lot like their Justice League counterparts, but not quite (Ultraman instead of Superman, Superwoman instead of Wonder Woman, and so on).

Batman's opposite number was Owlman, who wore a blue and gray costume somewhat similar to Batman's costume, but instead of a cowl he wore what looked like a toupee made out of an owl's head.

In 1999, writer Grant Morrison and artist Frank Quitely reintroduced a new version of the "Crime Syndicate of Amerika," this one hailing from a parallel earth within the Anti-Matter Universe in their original graphic novel JLA: Earth-2. The team roster was the same, but the characters were a little more thoughtfully designed, tweaked to more closely parallel their JLA counterparts, and some of them were given fuller back stories. 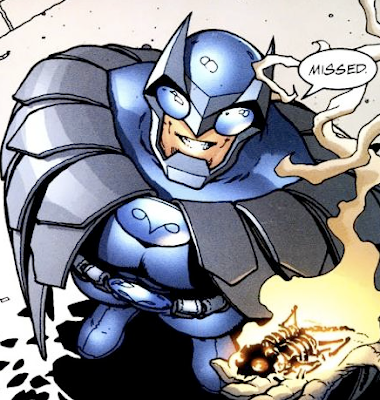 One of these was, of course, Owlman, who was now revealed to be Thomas Wayne Jr., older brother to Bruce Wayne. On their world, Bruce and his mother Martha Wayne were killed in that alley, while Thomas and his father, Thomas Wayne Sr., the police commissioner, survived. Blaming his father for the death of his mother, Thomas grew up to become the criminal mastermind of Gotham City, Owlman, and went to war with his father.

Morrison, who always showed a zeal for in-story allusions and/or Easter eggs, was in fact referencing an old, Crisis On Infinite Earths-rendered apocryphal story from a 1974 issue of World's Finest by Bob Haney, Dick Dillin and Vince Colletta.

In "Wipe The Blood Off My Name!", Batman pursues "The Boomerang Killer," only to discover it is actually his older brother Thomas Wayne Jr, who was severely and permanently brain-damaged in a childhood car accident, and confined to an asylum (I guess it was a very specific type of brain damage, which causes those who suffer from it to eventually grow up to become killers?). Bruce's parents had every intention of telling him about his criminally insane older brother they put in an asylum when he was old enough to understand, of course, but then there was that whole murder in an alley thing.

Fast forward to 2011, when Scott Snyder and Greg Capullo take over the relaunched Batman. Their first year's worth of stories is dedicated to The Court of Owls, a sort of semi-legendary Illuminati pulling the strings behind everything going on in Gotham City, a secret organization so secret that even Batman didn't know they were real. In addition to naming themselves after owls, wearing ceremonial owl masks and using a lot of owl themes in their decor, they also command a small army of elite, undead assassins in owl costumes that they refer to as "Talons."

At the climax, it is revealed that among their more prominent members is mayoral candidate Lincoln March, who Capullo draws to look a lot like Bruce Wayne. And with good reason!

March claims to be Thomas Wayne Jr., Bruce Wayne's younger brother, who was still in Martha Wayne's womb when she was in a terrible car accident. Born early and severely brain-damaged, he was put in the "Willowood Home For Children" (In Haney's story, Thomas Wayne Jr. was in the "Willowood Asylum;" like Morrison then, Snyder was heavily referencing the now non-canonical early '70s story). Feeling abandoned by his parents and older brother, Wayne/March was raised by the Court of Owls to inherit the Wayne empire. That didn't quite work out, nor did his run for mayor, so he ultimately makes a play to seize control of the Court of Owls, even going so far as to give himself the Court's undead-making super-secret super-serum, the one reserved for the virtually un-killable Talons. Then he puts on a fancy new Talon suit; "Something tough and modern," he says of it, " Something to rival the Batman." 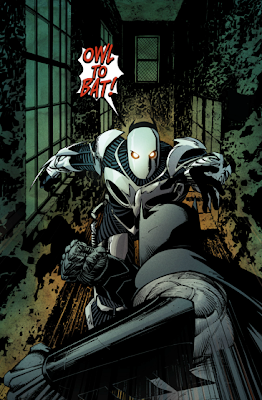 While he never goes by that name, Snyder and Capullo's March/Wayne dons a fancy owl costume and essentially becomes an owl man. (As to whether or not he actually is Thomas Wayne Jr., Bruce Wayne and Alfred Pennyworth are certain that he is not, that Bruce's brother actually died from the wounds sustained in that crash, but Bruce says he can't know with 100% certitude until he gets a DNA sample, and March/Wayne disappears during their climactic battle, in the fashion of many supervillains—presumably killed, but with no body discovered). 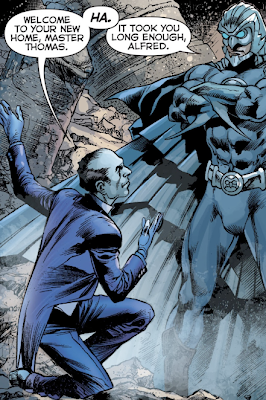 Then, in 2013, writer Geoff Johns re-introduced the new, New 52 version of The Crime Syndicate, who are once again from Earth-3, a parallel world where many aspects of the DC Universe is "reversed," including the fact that the heroes are villains and the villains are heroes. This Syndicate also has an Owlman, and as Johns reveals in issues of his Justice League of America, the new Owlman of Earth-3 is still Thomas Wayne Jr., now once again Bruce Wayne's older brother.

In Johns' origin story, the two Wayne children—Thomas and Bruce—conspired to kill their own parents, and, on the night when they were shot to death in the alley, Bruce had last-minute, second thoughts, so Thomas Jr., conspiring with Alfred Pennyworth, kills his mother, father and little brother. He then grows up to be Owlman.

So this is strange.

On the "real" Earth of the DC Universe, which I'll call Earth-New 52, there is a heroic Bruce Wayne defending Gotham City as the superhero Batman, and a villainous "Owlman" who is—or at least claims to be and presents a pretty good case for being—Thomas Wayne Jr.

And on Earth-3, the reversed world where good is evil and evil is good, Bruce Wayne was good (well, he was a spoiled brat who considered killing his parents, but he wasn't as evil as his brother), and a villanous Owlman who is really Thomas Wayne Jr.

In that respect, at least, the worlds aren't opposite at all. Thomas Wayne Jr./Owlman is a bad guy on both worlds, just as Bruce Wayne/Batman is a good guy (or at least not a bad guy) on both worlds.
Posted by Caleb at 6:07 PM

At least that's how I see it, though I wish there was some kind of hard evidence to confirm or deny it.

Any thoughts on the matter?