AdHouse is having a sale; here are some sale-item suggestions

Now that Free Comic Book Day has come and gone again, let's turn our attention from comics that you can get for free to comics you can buy for money...but much less money than you might otherwise be able to get them for.

AdHouse Books, publisher of many fine comics by many fine comics creators (almost all of which are impeccably well-designed), is having an inventory-clearing sale, and you can get some pretty great books for some pretty great prices. I've read and/or reviewed...let's see...most-ish of 'em, so I can offer some recommendations, if you'd like. So open another window to this location, and read along.

You'll find comics from such talents as Joshua Cotter, Farel Dalrymple, Stuart Immonen, Scott Mills and Joey Weiser among those currently on offer.

Now, if you haven't read any of these, and I were you, then I would definitely start with Project: Romantic, one of a trilogy of anthologies AdHouse put out riffing on three great subjects of comics making—Romance, robots (Project: Telstar) and superheroes (Project: Superior). Featuring short stories by Junko Mizuno, Hope Larson, Maris Wicks, Debbie Huey, Scott Morse and many others, it's a great standalone book, and a sort of primer to comics creators whose work one should keep their eye out for (Looking back on the Project books, its interesting to see how many of those creators have gone on to bigger things, and earned a higher degree of fame since their contribution). (I wrote a very short review of it for Las Vegas Weekly back in 2006). The one one sale is a hardcover edition, which usually sells for $30, but is now going for $15. That's 50% off! Has AdHouse's Chris Pitzer gone completely insane? He must have, with prices like these!

Speaking of the Project: trilogy, Project: Superior is itself not on sale, but some of its spin-offs are (Hey, I found an ancient, pre-EDILW review of Project: Superior saved here, even if the altweekly it originally appeared in purged its online archives after it was bought out by Columbus' daily newspaper). It was followed-up by a short-lived comic book-comic which extended the superhero comics-by-people-one-wouldn't-imagine-doing-superhero-comics theme entitled Superior Showcase. Issues #2 and #3 are in the sale for $1.50 a piece (Hey, I remember when comic books used to cost $1.50! Oh, those were the days...)

Superior Showcase #2 features a new adventure featuring Dalrymple's character from Project: Superior, plus stories by Wicks (Primates, SpongeBob Comics) and Weiser (Cavemen in Space,Mermin) and a cover by James Jean. As for #3, that features a new Street adAngel comic by Jim Rugg and Brian Maruca, and stories by Dustin Harbin and Laura Park, all behind a Roger Langridge cover.

Also from the pages of Project: Superior comes another comic book-comic, Zack Soto's The Secret Voice, whihc features Soto's strange, unsettling super-characters, and 100-page graphic novel Ace-Face: The Mod with the Metal Arms by Mike Dawson (Freddie & Me).
I'd also definitely recommend Lamar Abrams' Remake, a 150-ish page book collecting stories about Max Guy, a manga/anime-inspired robot boy with a super-gun with the extraordinary power to turn things into stuff. It originally ran for $12.95, and is now on sale for just $6.50 (I know I reviewed Remake somewhere, but I can't remember where, nor can I find it by a few minutes of Googling, so I assume it was someplace that has since taken it down/had parts of itself eaten by the Internet, like Blog@Newsarama 2.0 maybe...? Anyway, it was one of my favorite comics of 2009). There are two follow-ups, Remake Special and Remake 3xtra, which I never bought or read for reasons I can't explain; I intend to purchase those along with the Jay Stephens collection Welcome to Oddville and maybe Gregory Benton's B+F during this sale. 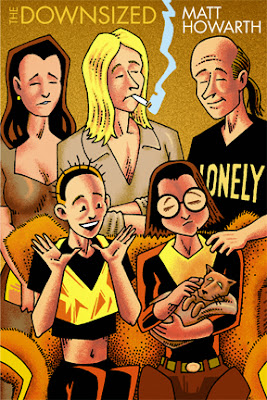 Also worthy of consideration are Matt Howarth's dramedy The Downsized (For just $3.50! This is another one I reviewed for Blog@, that Newsarama destroyed during some content purge or other), Jim Rugg's showcase/sketchbook/collection thingee Supermag (Just $5! Reviewed here) and J. Chris Campbell's hilarious and wonderfully-drawn gag comic Zig-Zag #1 (Well worth the $3 price tag).

I know I also read Doug Fraser's Mort Grimm and Fermin Solis' One Step After Another, but it's been so long I'll be damned if I can remember much about them. I remember liking the former a lot, and something about a skeleton on a motorcycle (I think?), and I can't remember much of anything about Solis' other than the cover.