In the New 52, Calendar Man is a hulking, violent, drug-dealing thug who beats his own son, because why wouldn't he be? 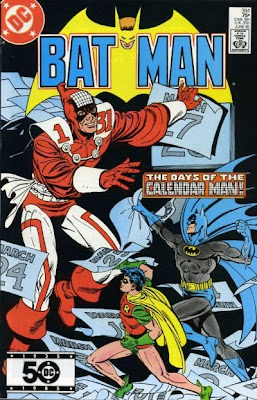 Calendar Man was, in reality, criminal mastermind Julian Gregory Day (get it?!), and he was one of Batman's many theme villains. Since Gotham already had crooks devoted to jokes, riddles, cats and birds, Day went with something even less specific—calendar-related crimes. In that first outing, he wore costumes corresponding to different seasons (the cover  of TEC #259 showed him coming at Batman and Robin in a fire-suit evocative of the summer sun).

He changed costumes a lot more than most villains, often adopting ones specific to the particular crime. For example, in his next appearance, decades later, he dressed as the various gods the days of the week are named. Never the greatest Batman foe—he's probably somewhere between Cluemaster and Signalman in Batman's own personal rating of his rogue's gallery, from most dangerous to least dangerous—The Calendar Man had a reputation of being something of a joke villain. If he had any reputation at all, that is.

That's the rep that Alan Grant and Tim Sale traded on when they cast him in their Shadow of The Bat story arc "The Misfits," in which Calendar Man teams up with similarly low-on-the-totem pole villains Catman, Killer Moth and new character Chancer in an attempt to pull off a big score and hit the big-time that had so far been to denied to each of them as a solo act (I reviewed "The Misfits" as part of this long, story-by-story review of the collection Tales of The Batman: Tim Sale).

Writer Chuck Dixon and seven different pencil artists (one for each day of the week, naturally) tried to give the character a more serious upgrade in the pages of 2000's Batman: 80-Page Giant #3, but Calendar Man is probably best-known for his appearances in Jeph Loeb and Tim Sale's "Year One" era series, The Long Halloween and Dark Victory. As the former has a character who kills on holidays, an incarcerated Day—depicted with a bald head and a ring of month abbreviations tattooed upon his head like a crown—served the Hannibal Lecter-like role of offering insight on date-obsessed killers. (His best appearance since "Misfits," however, is probably Landry Walker and Eric Q. Jones Batman: The Brave and The Bold #12, in which Adam Strange and Batman inadvertently create Christmas after an adventure involving time-travel and zeta beams).

DC didn't seem to have any urgent plans for the character during the New 52 reboot, as he was one of a trio of characters featured in their two-page advertorial features, "Channel 52." There Calendar Man—looking like a flabby version of Sale's depiction, stuffed into a suit and tie—serves as a reporter alongside Ambush Bug.

Then during last week's Detective Comics Annual #3, writer Buccellato and the issue's three artists (none of whom are cover artist Guillem March) and three colorists introduced us to New 52 Julian Day, offering what appears to be his new origin story. 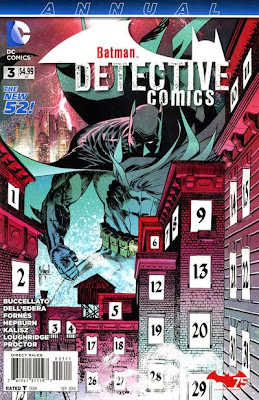 He is not a very likable or charming character, being a thug working for a drug-dealer character in Buccellato's ongoing plot involving the character The Squid, his little brother and the distribution of some sort of goofy super-drug that temporarily gives those who take it super-speed.

We first meet the character when he saunters into a men's room in a seedy bar, where Bruce Wayne awaits him, disguised as Matches Malone. He's huge, the top of his bald head just fitting in the doorway, and he's a good head or three taller than Batman. Batman tells Day that he's Matches Malone and locks the door. Day tells him he's going to fight him. And then we flash back to what brought the pair to this bout of bathroom fisticuffs.

The story continues the various plots that Buccellato has been filling the monthly issues with—only here they lack the presence of Francis Manapul's artwork—but we'll just focus on the Julian Day bits. We next see him in the back of an SUV stretch limo with The Squid and the Squid's little brother. The Squid tells his brother he's putting Day in charge of some big drug deal, and that Day is going to be taking his little brother under his wing, to teach him the business.

While having a drink together, Day tries to explain the importance of self-marketing in Gotham City villainy to his new student—"Branding in this town is important. Having an identity can go a long way." The kid's not buying it.

"Interesting theory," he responds. "But, with a name like 'Julian' I'd get comfortable with being a henchman."

Day responds by punching him really hard in the stomach, hard enough that the boy crumples to the floor. Then he goes off to take his fateful piss. 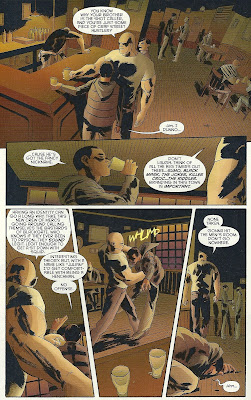 We then flash to an alley, where Batman is beating up some members of the new gang in town that is involved in the drug deal with The Squid and Day, when a little boy on a fire escape answers Batman's questions to the thugs, having overheard the thugs talking about stuff in the alley before.

Batman talks to the boy, noticing bruises on him and the way he seems to be afraid of his own father.

The boy, it turns out, is Aden Day, the young son of Julian Day. And, in addition to being upset about being beat, Aden's also points out that tonight is his birthday, but his dad seems to have forgotten. 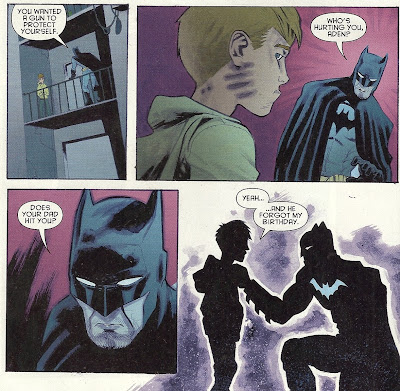 So, when Batman faces off against Day in the men's room, it's because he found out the criminal was abusing his own son. As Matches Malone, Batman beats the holy living hell out of Day, kicking him in the stomach ("KA-KRAK"), punching him in the face ("KA-KRAK") and, finally, slamming his face into the wall ("KA-KRAK"). Despite the sound effects, I don't think we're meant to read the KRAKs as bones breaking. If we are, then holy shit, Batman just destroyed Calendar Man before he could even become Calendar Man.

All the while Batman is beating on him, the disguised Dark Knight tells him off:


You know what today is? The date! October 9th...your son's birthday...He's home alone and youre in here getting drunk...on his birthday. Buy a damn calendar. 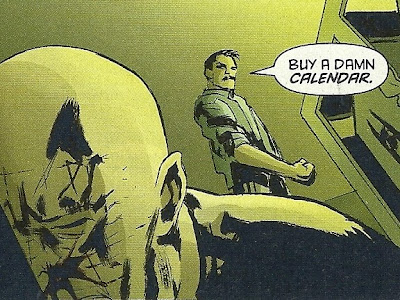 When Squid's little bro hears a commotion coming from the men's room, and he joins the crowd that find the beat-to-hell Day, we see Day muttering to himself "Calendar...get...a...calendar."

So, um, that's a different take on the character, whose origin I'm assuming we've just witnessed.

So once Julian Day synthesizes his own thinking about branding with Batman's violent suggestion of calendars, I'm assuming he'll return as Calendar Man.

It remains to be seen if he'll wear an awesome costume like the one at the top of this post, or if he'll go with something more generic and in keeping with his look in this book (When the character recently appeared in the pages of the short-lived Legends of the Dark Knight digital-first series, he was just a bald guy wearing an Uncle Sam hat, as he was in the midst of a Fourth of July-related terrorist act; I think what folks forget about the Sale redesign is that the only reason Day wasn't wearing a costume was because he was in Arkham Asylum, and was thus not allowed to wear a mask, tights and cape, but had to stick with an asylum-issue jumpsuit).

Whatever his costume ends up looking like though, a gigantic, eight-foot-tall Calendar Man with the shoulders of an NFL linebacker (with his pads on) strikes me as a pretty odd choice. Not as odd as making him a drug-dealer who beats his son, of course, but odd nonetheless.
Posted by Caleb at 9:08 PM