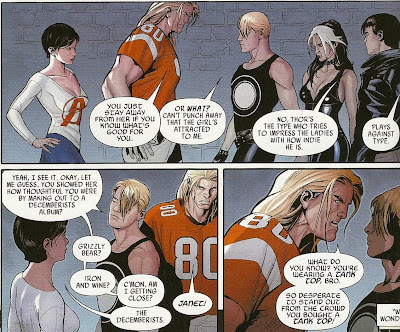 Also, The Decemberists may have been "indie" in 2001, when they self-released their first album, but they've had four fucking albums with Capitol Records by this point. I can't speak for Iron and Wine or Grizzly Bear, as I've not listened to either as much as I have The Decemberists, but I'm pretty sure the mutants in this scene—and/or Remender—aren't using the word "indie" correctly here.

This portion of the collection, which is drawn by Paul Renaud, is actually the strongest part of the book, in large part because of the unusual mix of characters Remender brings in under the collective name of "The Avengers of The Supernatural"—Dr. Strange, Blade, Satana, Ghost Rider Johnny Blaze, Man-Thing and a never named or otherwise identified Manphibian—and the fact that they all appear in a five-page sequence entitled "Martian Transylvania Super Hero Mutant Monster Hunger High School," in which The Avengers are jocks, the mutants wear leather and have bad haircuts and the supernatural characters are nerds.

The rest of the collection is exactly what the sub-title says, and, if you've heard or read anything about Axis already—even if just the solicitations for the series, or its premise—then there is absolutely nothing surprising about anything that occurs. It's three issues of Uncanny Avengers scripted by Remender and drawn by three different artists (Sanford Greene, Salvador Larroca and Daniel Acuna) and two issues of Magneto by writer Cullen Bunn and artists Gabriel Hernandez Walta and Javier Fernandez, all culminating with a cliffhanger in which The Red Skull assumes the form he wears in Axis (a form that, were it still somehow a surprise when encountered, would likely elicit an "Oh shit!" from older readers with memories of 1990s Marvel, and blank stares from others).

Let's first dispense quickly with the bulk of the collection, the stuff that isn't the Renaud-drawn annual. The Avengers Unity Division, the half-mutant, half-not-mutant squad that Captain America formed as a PR move in the wake of the Cyclops-lead mutant overthrow of the earth in Avengers Vs. X-Men, has just finished the long-ass adventure that filled up the whole first four collections of the series, involving Apocalypse dynasty politics, Kang and Immortus (and thus time travel shit) and The Red Skull, who had the late Charles Xavier's brain somehow shoved into his own skull with his own brain, giving him Xavier's mental powers. Somehow.

The Unity Division got messed-up pretty bad in the proceedings, with Havok having half of his face horribly burned and Wonder Man getting stuck inside Rogue in the same way Carol Danvers used to be stuck in Rogue.

Meanwhile, the Red Skull and his S-Men have set up a concentration camp for mutants, and Magneto wants to go kill him for that, but instead he ends up getting captured, along with Havok, Wanda and Rogue. Once free, Magneto, immediately goes about killing The Red Skull, ultimately smashing his head in with an armful of bricks. The mutant heroes are really, really mad about this for some reason, despite the fact that a) The Red Skull is an actual Nazi from World War II who just built a fucking concentration camp. And even if they want to be moral absolutists about not killing, even guys who are essentially Hitler, but worse, well, isn't it weird that like 20 pages earlier they were sitting around drinking beers with their BFF Wolverine, whose killed, like, a couple thousand people or something, and who had just vowed to kill The Red Skull himself. Hypocrites. (Oh, and in the Annual, Thor mentions all the frost giants he's "destroyed;" now, I'm sure those frost giants were real jerks and all, but I'm more sure still that they didn't participate in any organized attempts at genocide.)

Anyway, Red Skull then gets back up and is like, "Hey, I'm Onslaught now! And check it out, I'm all giant and I've got horns and tentacles for some reason! I'm all kaiju-ed out! Meet you guys in the pages of Axis, K?" 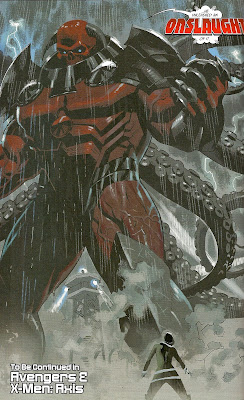 And that's the end of the Axis Prelude part of Uncanny Avengers Vol. 5: Axis Prelude; the rest of the book is devoted to the weird-ass annual.

The premise involves maybe the lamest, laziest, over-done plot motivator in X-Men comics: Mojo, the extra-dimensional TV producer who is generally just an excuse for a writer to get away with writing crazy shit with as little imagination or set-up as possible (See also Jason Aaron's far superior Astonishing Wolverine & Spider-Man).

As I said, there are some interesting ideas floating around in this script, including the passing suggestion that while Captain America and the Avengers may be engaged in a sincere effort to (finally) start doing something to help the world's mutants as they struggle with the constant threat of genocide, no one—not even the mutants—seem to have all that much sympathy for the plight of the world's monsters, who are even worse off.

Mainly though, it's interesting because it offers us a rare look at a comic book writer apparently suffering a crisis of faith about his career in the script of a comic book he's writing.

So Mojo finds hiself in a room with a group of TV executives, who are disappointed in his latest show (The intriguingly titled "Devil Dinosaur's Power Pack Force Antique Roadshow", a "Frankenstein" that Mojo says "was created in this room based on your team's notes." Things get meta immediately, with Mojo a singular creator with a special vision that is constantly being diluted by his corporate masters. He pitches "Avengers of the Supernatural," and is immediately bombarded with "notes," and a threat from the head executive: "Mojo understands that if he fails us again...I'll release the critics on him. There are Chinese hells more pleasant." Behind the executive, wearing high-tech body armor with glowing bits to it, are a group of men, some fat, some with beards, some balding, some with glasses; these are, apparently, the fearsome critics (Man, I haven't read a Marvel comic making fun of the people who read Marvel comics since...why, it's been almost two weeks now!).

From there, the story and Mojo's TV show become one and the same, with Mojo narrating. The Unity Division are all hanging out at the mansion, with about half of them shooting pool and the other half lounging in bathing suits by the pool (This, by the way, apparently takes place before all the comics that precede it in this issue, so the entire line-up is still present). Dr. Strange's supernatural crew shows up and there's a fight scene, ending with the Uncanny Avengers all getting glowing headbands, and then we cut to the aforementioned TV show, which recasts our heroes as characters in a high school drama.

It all falls apart when Johnny Blaze loses control of the spirit of vengeance somehow, and Ghost Rider motorcycles around, fighting everybody and trying to judge/destroy the whole world, a feat he at first tries to accomplish by popping a wheelie and flying his flaming motorcycle to the moon and looking down on the entire planet with his guilt-inducing "Penance Stare."

The Marvel heroes—man, mutant and monster—join forces to defeat The Ghost Rider spirit, re-caging it in Blaze. And then, on the final page and a half, Remender seems to question himself, through dialogue between two of the extra-dimensional television executives: 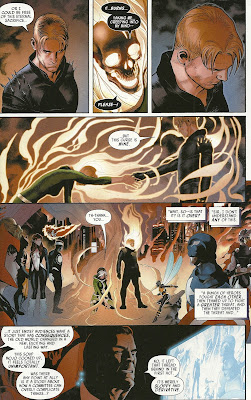 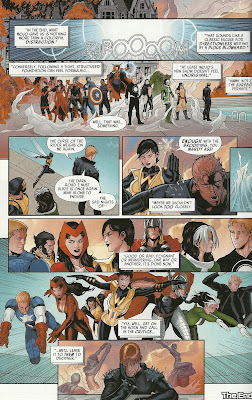 Hey, I'm a critic! I can help you Remender stand-ins decipher the story! It is unimportant, it is sloppy and derivative and it is bad.

That annual sure had a nice Arthur Adams cover, though, didn't it? 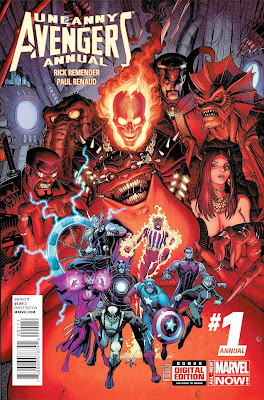 Wonder Man getting stuck inside Rogue in the same way Carol Danvers used to be stuck in Rogue.

Am I alone in thinking how dodgy that sentence sounded.

Haven't read Uncanny Avengers, but going by the plot summation it really does sound like someone having read a lot of Claremont X-men and retelling them in the modern era (the biggest give away being Mojo appearing in an Annual). My problem is that I read much of the Claremont run, and then reread the same ideas in the 90's X-Men run, and have little (if any) desire to read them again.

That cover sold me that annual, and it stunk. But is that Red Skull the "real" Skull? I thought he was just a thawed-out clone. Perhaps the guys were just squeamish on the issue of clone rights!

I've never even heard of any of those bands! Man, I'm old. I also completely missed this book, and from the looks of it, I'm glad.

You're not alone. The thought occurred to me as I was writing it, and I briefly considered sticking a parenthetical "Not like that, you perverts!" at the end of the phrase, and then thought, Nah, the Internet has enough dirty jokes as it is.

I...have no idea, but now that you mention it, I guess I did think The Red Skull was dead...and didn't his daughter become the new Red Skull in Fear Itself

Finally, just to continue complaining about that one panel at the top of the post, I was in a Starbucks yesterday and they were selling a new Decemberists album at the Starbucks. Is anything less indie than that?

Kelley Jones did some Swamp Thing in Swamp Thing, as well - around #90, I think, when Veitch had been left little option but to resign and Doug Wheeler was writing. The scripts weren't great, but the art made it almost worthwhile.