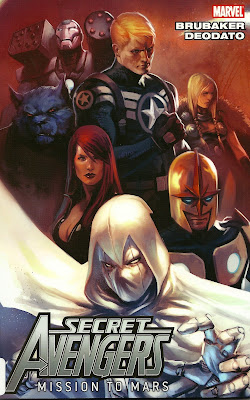 Here's a pretty good example of how needlessly difficult Marvel makes it to read and/or buy their comics in trade, due to the publisher's laser-beam focus on short-term sales success over long-term sales success (i.e. constantly rebooting and renumbering their books).

It's easy enough to stay on top of the Marvel comics line if you're reading the books serially–that is, Wednesday in, Wednesday out, as they're published–or even in trade, so long as you're reading the trades as those are released. But wait a few years and then try to get into, say, The Avengers, or X-Force, or Thunderbolts or–God help you–the X-Men, and it can get tricky.

So say you want to read Secret Avengers, a book devoted to, as the title implies, an off-the-books, covert superhero team independent of the various other public Avengers. The concept is only five years old, so it shouldn't really be that hard to figure out where to start, right?

But instead of reading, say, Secret Avengers Vols. 1-8, the actual reading order is something like this (I think):

Secret Avengers Vol. 2 (not yet published)

Secret Avengers Vol. 3 (not yet published)

If it turns out that this post about this particular volume spent far more time on describing the insanity of Marvel's trade-publishing program, well, that's probably fitting. I spent more time figuring out which volume to start with and where to order it from then I did actually reading the book.

Launched in 2010 as part of the publisher's "Heroic Age" branding initiative, longtime Captain America writer Ed Brubaker begins very much en media res, assuming a little not-terribly-vital familiarity with the goings-on of the Marvel Universe. Convicted serial killer and former supervillain Norman Osborn had just vacated his Obama-appointed position as The Boss of All Superheroes (as head of the SHIELD-replacement organization HAMMER, which doesn't actually stand for anything; they just liked the sound of it). The new Boss of All Superheroes is former Captain America Steve Rogers (whose title and shield were both being used by Bucky Barnes at the time), and in addition to running SHIELD he has assembled a secret team of super-heroes whose skill-sets lend themselves to subterfuge, espionage and ass-kicking, depending on the character. 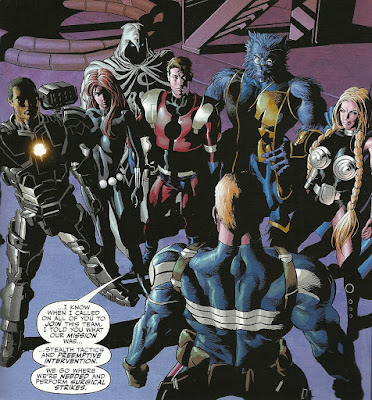 Brubaker's plotting is very reminiscent of what he had done on Captain America for so long, balancing more tactile, real-world espionage and military adventure with the more fantastic elements inherent in the superhero genre, especially a shared-setting superhero comic taking place as fantastical as the Marvel Universe. The dials and knobs are merely turned and tuned differently here, as he includes a whole team of heroes, and goes bigger and crazier with the plots. I mean, you saw the sub-title, right? A large portion of this collection (of the first iteration of Secret Avengers first five issues) is set on the planet Mars, and cosmic hero Nova plays a significant role.

The very full, very fast-paced first issue introduces the entire team, in action in the present and being recruited by Rogers during flashbacks, as they recover an artifact from Roxxon that isn't The Serpent Crown, but seems to be very much like it. Rogers had space-hero Nova investigating Roxxon's mining operation on the planet Mars, where he came into contact with another crown artifact, and so the team needs to go save him. Meanwhile, a shadowy group of espionage-types in matching black uniforms with Eastern dragons on them are also after the artifacts. And they are lead by...Nick Fury?!

The first four issues are a single story arc, in which Brubaker proves particularly adept at juggling a superhero team. Despite the more real-world focus of the first issue, things get big and crazy fast. The Avengers take a spaceship to Mars, they get cool space-suits with their symbols on them, they encounter a robot from an ancient alien civilization, Nova is possessed and evil, Steve Rogers puts on Nova's power ring helmet and temporarily becomes a Captain America-ized member of the Green Lantern Corps Nova Corps, every member of the team gets to show off their powers and/or worth in some spotlight scene or another...it's big, dumb superhero comics written very smart and very sincerely, without a trace of irony or cynicism (O'Grady is the closest thing we get to a point-of-view character, as he's the only one really impressed by things like "going to Mars" and so on).

It's all drawn by Mike Deodato (with Will Conrad on one issue), who has a very particular style that he never deviates from, sometimes to the detriment of the story. His muscular figures swelling out of their spandex works well enough here, as does his attempts at hyper-realistic backgrounds and civilian scenes. This isn't a terribly subtle book, and thus Deodato's action-figure style is a good fit. 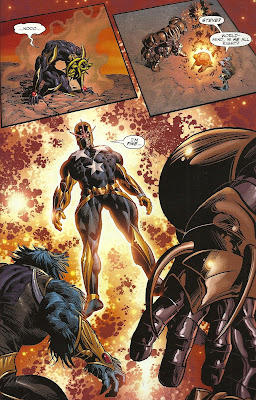 The fifth and final issue explains how and why there is apparently an evil version of Nick Fury working with the bad guys on The Shadow Council, which is kinda long and unimportant to get into here, but it's based on a bit of old Marvel trivia that one not need know to understand and/or enjoy how it unfolds. Same goes for all of the Marvel stuff, really; Brubaker name-checks Roxxon, The Serpent Crown, Celestials, Zodiac and stuff like that, but it's all thoroughly contextualized to the point that if you've read stuff about them before, it's fine, and if you haven't, the way in which they operate within the comic is apparent.

That last issue is drawn by David Aja, Michael Lark and Stefano Gaudiano, and has a different colorist than the previous four (Jose Villarrubia, rather than Rain Beredo), and it's an aesthetic 180. It's a smartly planned one, though, as the Avengers battle on Mars is over, and Brubaker turns his attention to a secret history of a Fury lookalike and his place in the world.

It's pretty good stuff, really...if you can find it.

My favorite part of the comic came during the first issue/chapter, during which Black Widow and Valkyrie, pretending to be escorts (ugh) break cover and beat up a bunch of guys, and a super-jet hovers outside the building they are in, with Steve Rogers bounding in wearing his navy blue spandex with a giant star on the chest to evacuate them and steal a chest with the super-artifact in it.

"We won and we're getting away with no one knowing who we are," the unmasked Rogers in the colorful costume who happens to be the most well-known superhero in the world, tells his unmasked colleagues. I know the comic wouldn't e as much fun to look at if all the heroes wore black clothes and matching ski-masks all the time, but they're hardly the most inconspicuous group. I guess it's a good job Valkyrie didn't bring her pegasus with her...

Speaking of costumes, I really liked the team's (mostly) red and blue space suits with their own icons on them (a star for Cap, a circle for Ant-Man, an hourglass symbol for Black Widow; Moon Knight gets his own all-white space suit), and I even liked Beast's Avengers romper. 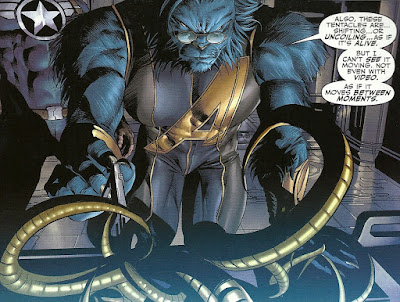 Remember, this team is a secret team, and Beast does most of his work behind the scenes. In this panel, for example, he's in a lab looking at computers or whatever and explaining science shit. He still thought he should wear a big Avengers-logo while doing so, though.

I guess if you have that in your closet, you take whatever opportunities you have to wear it...
Posted by Caleb at 9:20 AM

Something - ANYTHING - that would clearly divide out books that belong to the same "run" in the correct order would be nice.

While I am forever in Ellis' debt for bringing Shang-Chi into the Secret Avengers and utilizing him heavily, it's Ales Kot's run on the title that is hands-down my favourite. That'd be Secret Avengers Vol. 3, Volumes 1 through 3. I particularly love how he does it in a way that adds depth to Fraction's Hawkeye, it's great stuff.