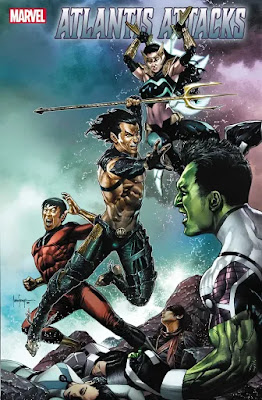 Among the most common reoccurring words in this month's Marvel solicitations are "of 5," as in "#1 (of 5)" or "#4 (of 5)". Five seems to be the magic number of issues in a Marvel miniseries now, and there are a lot of them at varying points of their runs in February of next years. In fact, I counted 16: Amazing Spider-Man: The Daily Bugle, Ant-Man,Atlantis Attacks (the cover of which is above), Avengers of The Wastelands, Conan: Battle For The Serpent Crown, Dark Agnes, Falcon & Winter Soldier, Gwen Stacy, Marvel's Spider-Man: The Black Cat Strikes, Nebula, Ravencroft, Revenge of The Cosmic Ghost Rider, Spider-Ham, Symbiote Spider-Man: Alien Reality and Yondu.

I don't know that this trend is necessarily a good thing or a bad thing, but it's definitely a thing. As you can tell from scanning those titles, many of those are pretty obviously the sorts of projects that would have always been miniseries, being spin-offs of ongoing titles, or devoted to particular events or out-of-continuity affairs. Others, though, seem like they could be ongoing series, and are either broken up into the series-of-miniseries models, or their existence as miniseries demonstrates that Marvel has come to the realization that not every Marvel character can carry on an ongoing solo series for all that long, and rather than launching an "ongoing" that they will cancel at issue #12 or so, they're being more cautious, more realistic and, importantly, more upfront about their expectations of this new Ant-Man or Falcon & Winter Soldier series. Like, I obviously don't have to pre-order the damn things to sell to customers at a comic shop, but I imagine ordering the first issue of a new miniseries vs. the first issue of a new ongoing series involves a different calculus...or at least it did in years past.

Now let's see, what else has Marvel got for us this February... 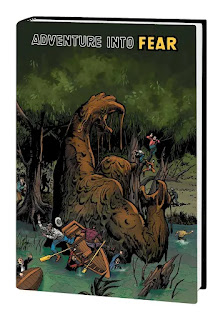 ADVENTURE INTO FEAR OMNIBUS HC
Written by STAN LEE, LARRY LIEBER, STEVE GERBER, MIKE FRIEDRICH, DOUG MOENCH, BILL MANTLO & MORE
Penciled by JACK KIRBY, DON HECK, STEVE DITKO, PAUL REINMAN, JOE SINNOTT, RICH BUCKLER, JIM STARLIN, VAL MAYERIK, PAUL GULACY, GIL KANE, P. CRAIG RUSSELL, FRANK ROBBINS, GEORGE EVANS & MORE
Cover by JACK KIRBY
Adventure into Fear with Man-Thing, Morbius and monsters in the Mighty Marvel Manner! The classic 1970s horror series is collected in full — including every last reprint, backup tale and hair-raising adventure of its iconic series stars! First, thrill to a scintillating selection of terrifying Atlas Era and Silver Age stories by such legends as Stan Lee, Jack Kirby and Steve Ditko! Then, the shambling muck-monster Man-Thing oozes into the spotlight — and those who know fear will burn at his touch! That includes demon cults, sorcerers and Thog the Nether-Spawn — but what about the sky being named Wundarr? Next, Morbius the Living Vampire claims the title role — and faces threats including the Cat People, the Caretakers of Arcturus and the deadly Daemond! But will Morbius be staked by Blade the Vampire Slayer? Prepare to know fear in its full form! Collecting FEAR #1-31.
816 PGS./Rated T …$150.00
ISBN: 978-1-302-92512-3
Trim size: oversized 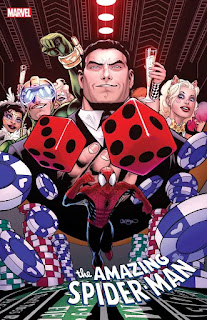 AMAZING SPIDER-MAN #39
NICK SPENCER (W) • IBAN COELLO (A) • COVER BY PATRICK GLEASON
...
• There’s a new game in town, and the ante is QUITE HIGH!
• Welcome to The Palace, a super-villain casino run by the classic (and under-utilized) Spidey-villain CHANCE! It’s got everything a villain could want, including betting on whether your arch-enemy is going to make it through his or her latest super-battle!
• Not only will this not sit well with Spidey, but it may just CRUSH him.
32 PGS./Rated T …$3.99

Well, he must be under-utilized, because I've never even heard of him! Of course, I had never even heard of Mr. Big until I saw a version of him show up in Spencer's ASM, so it's not like I'm a Spider-Man villain expert or anything. Hell, I just found out about the Spider-Man character who is also basically Spawn this past year! 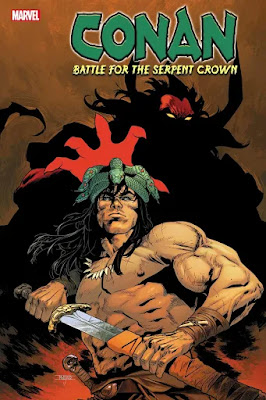 No offense or anything Conan, but the Serpent Crown is a kinda dumb-looking crown, and it looks dumb on you. 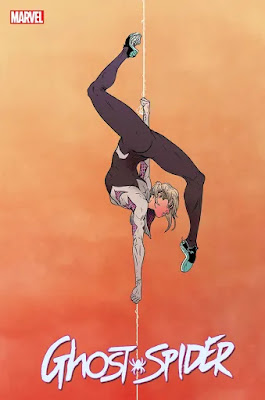 Hey everybody, look! It's Paul Pope! Paul Pope is drawing a cover for February's Ghost Spider #7! That is an important thing I think everyone should know!

It seems like it has been a very, very long time since I've seen a new Paul Pope comic. In fact, I think the last time I read something that Pope wrote and drew was...Battling Boy...? Could that be correct? And that was the first part of a series; I don't recall ever  seeing a second volume Battling Boy, just a spin-off... 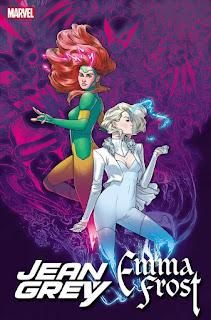 The first of five essential X-tales specially designed to showcase some of Marvel’s best artists! First up, Russell Dauterman, superstar artist of THOR and WAR OF THE REALMS! When Storm is in danger, it’s going to take two of the most powerful telepaths on Earth working together to make things right. Jean Grey and Emma Frost, together again for the good of Krakoa!
40 PGS./ONE SHOT/Rated T+ …$4.99

With all the series that aren't Hickman's X-Men series diluting the line right out of the gate (And this month, a new Wolverine ongoing joins X-Men franchise B-titles Excalibur, The Marauders, The New Mutants and X-Force), I think it's probably noteworthy that Hickman himself is writing this. Also of note is the mention that these "X-tales" are "specially designed to showcase some of Marvel's best artists." I would definitely agree on using that appellation to refer to Russell Dauterman, who's drawing this issue. I'm curious to see who the other 4-8 X-Men that Marvel thinks are worth showcasing in this format, and who the other four artists might be... 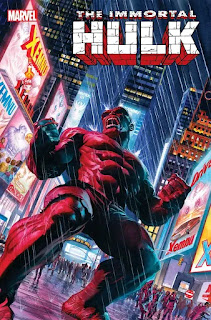 Well, Xemnu the Living Hulk might have fur, but I don't know if I'd necessarily call him cuddly, not with all those metal plates and bolts sticking out of his head and mid-section. I imagine hugging him would be a bit like hugging a car engine wrapped in fake fur.

But I like Xemnu. And I like Immortal Hulk. So I'm looking forward to reading this arc eventually. 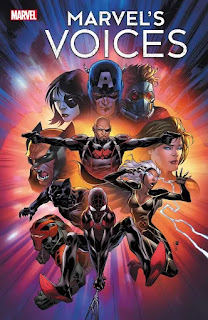 It's a comic based on a podcast...about the process of...making comics...? Huh. Normally that would give me some pause, but look at that line-up! Kyle Baker! Damion Scott! Sanford Greene! Brian Stelfreeze! Hell yeah I want to read this comic, whatever the hell it's based on. 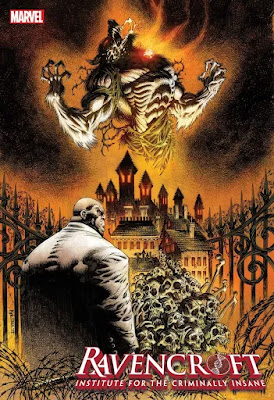 Kyle Hotz's cover for Ravencroft #2. I just like Kyle Hotz art, so I thought I would note that this cover exists. He's not drawing the interiors, which makes me a lot less interested in the series, but it does star J. Jonah Jameson's astronaut sun who is also a space-werewolf adventurer, which does pique my interest. 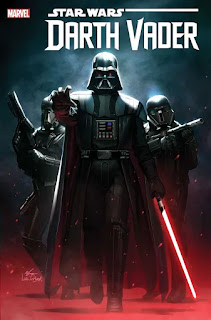 STAR WARS: DARTH VADER #1
GREG PAK (W) • RAFFAELE IENCO (A) • Cover By Inhyuk Lee
VARIANT COVER BY RAFFAELE IENCO
VARIANT COVER BY TONY DANIEL
VARIANT COVER BY MIKE DEL MUNDO
EMPIRE STRIKES BACK VARIANT COVER BY CHRIS SPROUSE
MOVIE VARIANT COVER ALSO AVAILABLE
“JOIN ME, AND TOGETHER, WE CAN RULE THE GALAXY AS FATHER AND SON!”
THE TRAGEDY OF DARTH VADER CONTINUES!
In the shattering climax of The Empire Strikes Back, Darth Vader infamously reveals his true relationship to Luke Skywalker and invites his son to rule the galaxy at his side. But Luke refuses -- plunging into the abyss beneath Cloud City rather than turn to the Dark Side. We all remember Luke’s utter horror in this life-altering moment. But what about Vader? In this new epic chapter in the Darth Vader saga, the dark lord grapples with Luke’s unthinkable refusal and embarks on a bloody mission of rage-filled revenge against everything and everyone who had a hand in hiding and corrupting his only son. But even as he uncovers the secrets of Luke’s origins, Vader must face shocking new challenges from his own dark past.
Writer Greg Pak and artist Raffaele Ienco unleash Darth Vader on his dark quest of vengeance and discovery this February! With covers by InHyuk Lee!
40 PGS./Rated T …$4.99
Star Wars © Lucasfilm Ltd. & TM. All rights reserved. Used under authorization. Text and illustrations for Star Wars are © 2019 Lucasfilm Ltd.

Well, I think I've officially lost count now. Is this the third ongoing series starring Darth Vader Marvel has launched since reacquiring the license to publish Star Wars comics in 2015...? That seems like at least one too many. I understand the why of it. This series is jumping to a new point in the timeline and all, but it still seems like if they have to restart the numbering (and I'm not convinced they do), then maybe they could adjust the title to reflect the change in setting...? Marvel's doing the same with the main Star Wars book, relaunching it with a new #1 instead of just continuing the numbering (like they did when they first had the Star Wars license, and similarly made a jump from the pre-Empire Strikes Back time to the post-Empire time).

Looks like there are five variant covers but, sadly, none of them are by Jeffrey Brown. 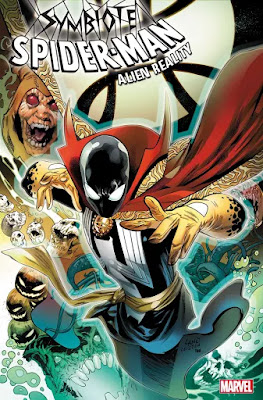 SYMBIOTE SPIDER-MAN: ALIEN REALITY #3 (OF 5)
PETER DAVID (W) • GREG LAND (A/C)
...
PETER PARKER: THE SPIDER SUPREME?!
• After reliving one of the most horrible moments of his life, Peter Parker turns to one of his oldest allies for a magical helping hand.
• Don’t miss the next history-shaking adventure of Peter David and Greg Land’s landmark SYMBIOTE SPIDER-MAN Series!
32 PGS./Rated T …$3.99 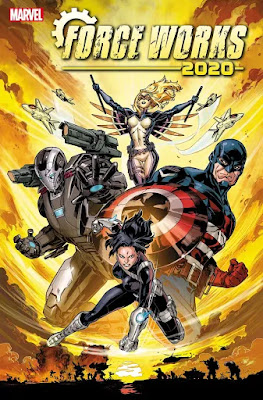 2020 FORCE WORKS #1 (OF 3)
MATTHEW ROSENBERG (W)
JUANAN RAMIREZ (A)
COVER BY CARLOS GOMEZ
...
The eruption of a violent robot revolution threatens all manner of biological life! Teetering on the precipice of extinction, there’s only one man with enough tactical skill, killer instinct and ruthless leadership to lead the rebellion: War Machine! Join War Machine and his elite paramilitary squad (U.S.Agent, Mockingbird, and Quake) in the final crusade for humanity’s fate!
32 pages/Rated T+ …$3.99

Oof, those wing things are not a flattering look for poor Mockingbird...
Posted by Caleb at 7:38 PM