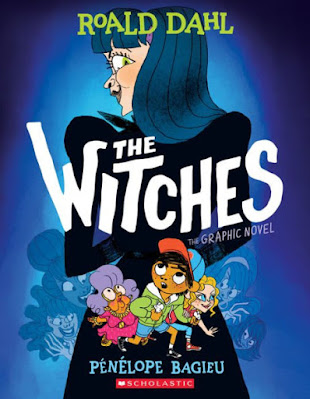 Before I cracked the cover of Pénélope Bagieu's new graphic novel adaptation of Roald Dahl's The Witches,  the image I was most curious to see was how she would decide to depict the character of The Grand High Witch. Dahl's prose description of the book basically makes her sound like she is unimaginably, un-draw-ably hideous to look at, despite the fact that his was an illustrated novel.

Here is how he describes her face when she first removes her mask before the assembled crowd of all the witches in England:

As she took off the  mask, she turned sideways and placed it carefully upon a small table near by, and when she turned round again and faced us, I nearly screamed out loud.

That face of hers was the most frightful and frightening thing I have ever seen. Just looking at it gave me the shakes all over. It was so crumpled and wizened, so shrunken and shrivelled, it looked as though it had been pickled in vinegar. It was a fearsome and ghastly sight. There was something terribly wrong with it, something foul and putrid and decayed. It seemed quite literally to be rotting away at the edges, and in the middle of the face, around the mouth and cheeks, I could see the skin all cankered and worm-eaten, as though maggots were working away in there.

There are times when something is so frightful you become mesmerised by it and can't look away. I was like that now. I was transfixed. I was numbed. I was magnetised by the sheer horror of this woman's features. But there was more to it than that. There was a look of serpents in those eyes of hers as they flashed around the audience.

That's a pretty great passage, and one that certainly seems to present a challenge to illustrators, or anyone wishing to adapt the story into a visual medium. 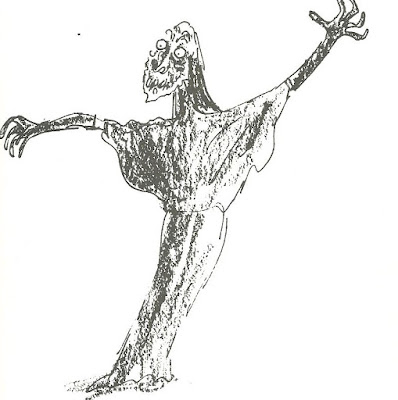 And here is another view, which shows her face more in profile: 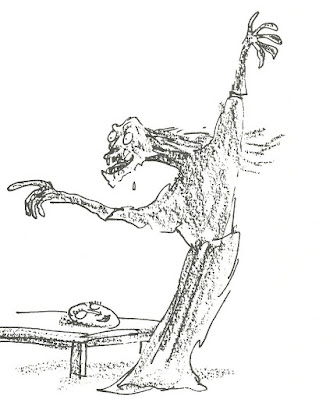 In 1990, director Nicolas Roeg adapted Dahl's novel into a film, and the version of the Grand High Witch that appeared in it was pretty hideous: 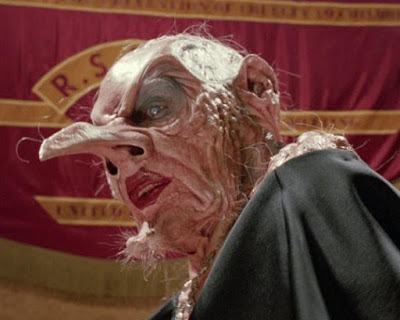 I never saw the movie, so I'm not quite sure how she managed to fit that nose and chin under an Angelica Houston mask. A new film adaptation, directed by Robert Zemeckis and starring Anne Hathaway as the Grand High Witch, will be released on HBO Max later this month.
Here is Bagieu's take on the unmasked Grand High Witch: 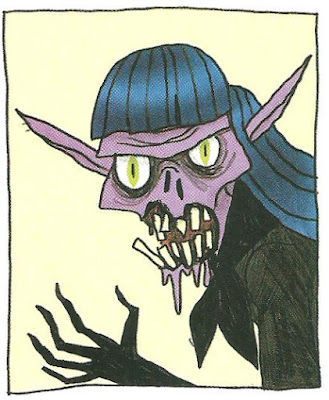 And here's another image, in profile, where you can really see how Bagieu's version barely even meets the definition of a face, as her witch's lower jaw seems like it is always in the process of falling off: 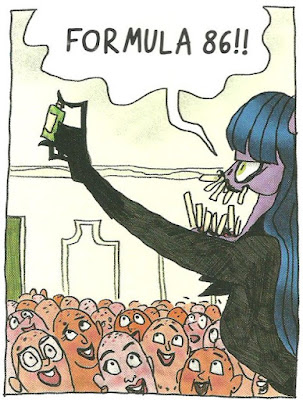 Those are some very Tim Sale's Joker-esque teeth.