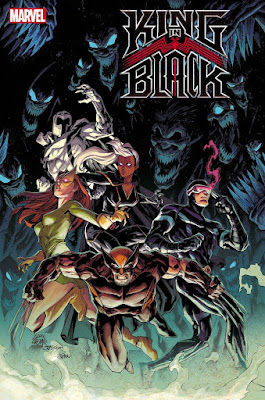 Marvel's King In Black events keeps on...King In Black-ing, I guess, with 18 new installments of varying degrees of importance scheduled for February of next year. That's less than half of the 54 new, original comic book-comics that Marvel will be publishing that month, but man, that's still a lot, isn't it? It seems like a lot.
Among them will be a couple of new one-shots, because apparently the series just wasn't big enough, starring Captain America and Black Panther (of course, this tactic of character-specific one-shots does spare those characters' ongoing books from being invaded by the King In Black event, so it's probably not a bad way to go).
Anyway, let's see if anything Marvel has to offer looks particularly noteworthy, shall we...? 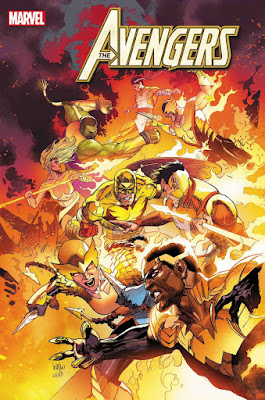 All of these be-Phoenix-ed re-designs on Leinil Francis  Yu's cover for Avengers #42 look so dumb that I love them. A Luca Marseca will be drawing the interior art, although one asumes the same coold/dumb costume redesgns will be present within the book as well... 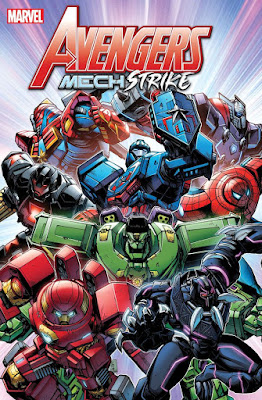 I confess to some confusion over why Avengers: Mech Strike #1, the first part of a five-issue miniseries by writer Jed MacKay and artist Carlos Magno,exists at all, and what, precisely, the difference is between an Avengers Mech and a Marvel Mega Morph.
The Mega Morphs were what they called the big, giant robot suits that various Marvel characters wore in the 2005 miniseries Mega Morphs, which I recall buying becaue it looked kind of stupid and kind of cool (much like this!), and because then fellow Columbusite Sean McKeever scripted it (I don't recall much about it at this time, aside from the fact that the Hulk also had a Mega Morph in that series, which raised the question of why the Hulk would want/need a giant robot suit, and if he would be able to pilot it).
As for the reason these exist, one of the variant covers is referred to as a toy varaint, so I assume this is one of those very occasional Marvle comics produced to tie-in with a Marvel-branded toy line. As for the differences between Mega Morphs and these mech suits, I think the Mega Morphs transformed—er, morphed into vehicles. That, and apparently girls can drive the mech suits, as it looks like both Black Widow and Captain marvel are represented on Kei Zama's cover above.
I plan to read this in trade, at which point maybe I will re-read Mega Morphs so I can compare and contrast... 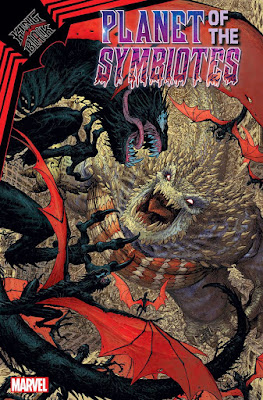 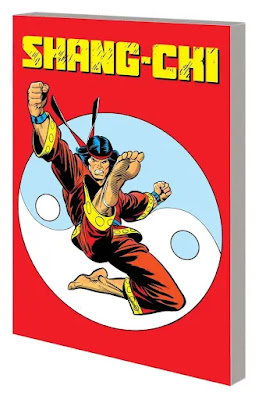 Well that's weird. Among the stories Marvel is collecting in Shang-Chi: Earth's Mightiest Martial Artist is one written by Warren Ellis. Like the Distinguished Competition, then, I guess Marvel's A-OK publishing work with Ellis' name attached, even though one would assume that his presence on a book would be enough of a poison pill to turn off most comics fans who have followed the comics news over the last terrible year or so.
What's particularly perplexing about it is that Ellis is just one of the five writers credited, and there are some 47 years worth of Shang-Chi comics in existence now. Surely it couldn't be that hard to find a decent Shang-Chi story not written by a guy with the sorts of allegations that have piled up against Ellis.
The only other Marvel book with his name attached in February's solicits is the X-Men: Age of Apocalpse Omnibus, but presumably the nature of that book makes not including Ellis' contributions a bit more problematic than simply leaving him out of a anthology of random-ish Shang-Chi comics. The only unifying theme here seems to be comics in which Shang-Chi teams up with other Marvel characters, but there can't be only five of those... 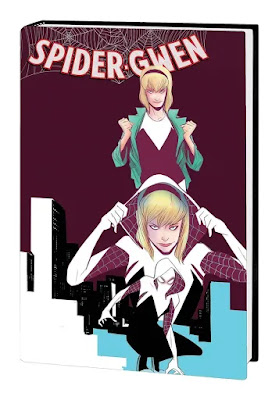 Ugh. Of course, Marvel is still collecting and publishing Jason Latour comics, as is the case with this $125 Spider-Gwen Omnibus, so maybe the fact that they included an Ellis-scripted book in their Shang-Chi collection isn't that surprising... 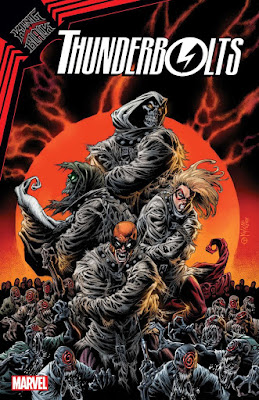 Have I mentioned my love of Kyle Hotz's art lately? Oh, I have? Well, let me tell you again: I love Kyle Hotz's art. He's drawing the cover for King In Black: Thunderbolts #2, but not the interior. However, the interior art is by Juan Ferreyra, and that guy's pretty good at drawing comics, too. 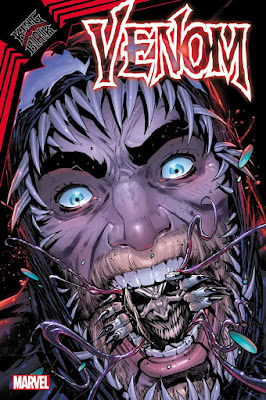 Well, this is terrifying! That's the cover of Venom #33, I believe by Iban Coell (there are, of course, a coupla covers). 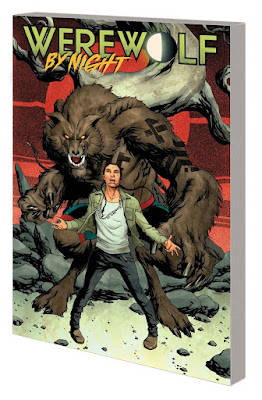 Did anyone read this year's Werewolf By Night miniseries and, if so, was it any good? I liked the original Werewolf By Night comics, but there seems to be nothing connecting this new series, which will be collected as Werewolf By Night: New Wolf Rising, to those comics or even the original character, aside from the name. Additionally, this is apparently co-written by a Black Eyed Pea, which gives me some paws. I mean pause! 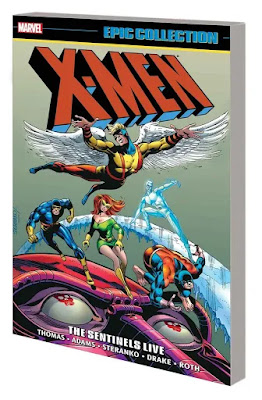 I don't recall ever seeing the costume that Angel is wearing on the cover of X-Men Epic Collection: The Sentinels Live, and, well, I can see why it's not one that gets seen a lot.
Posted by Caleb at 9:29 AM