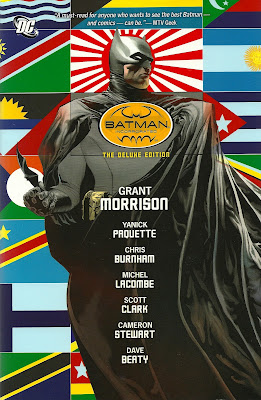 In 2012, Grant Morrison's 2011 comic book series Batman, Incorporated was collected into a hardcover graphic novel edition that contained all eight issues of the series, plus the over-sized Batman, Inc: Leviathan Strikes! special that sort of smooshed a few issues' worth of content into a single comic book in order to wrap up the storyline at a logical end point before DC Comics rebooted their fictional universe and refurbished their DCU line of books. The collection was entitled Batman, Incorporated Vol. 1.

Later in 2012, DC relaunched the Morrison-written Batman, Incorporated comic with a new #1, and the series picked up right where the canceled series had ended, continuing Morrison's long-running, multi-title storyline de- and re-constructing Batman. This current iteration of Batman, Inc will conclude with July's issue #13.

In this week's comics, DC ran house ads for several upcoming collections, including one for the newer, New 52 second volume of Batman, Inc. 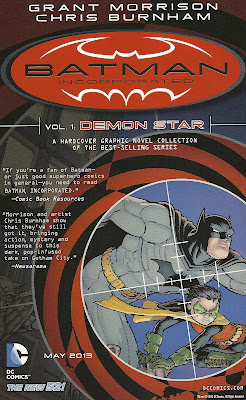 It will be entitled Batman, Incorporated Vol. 1: The Demon Star.

Man, you said it. That's ridiculous.