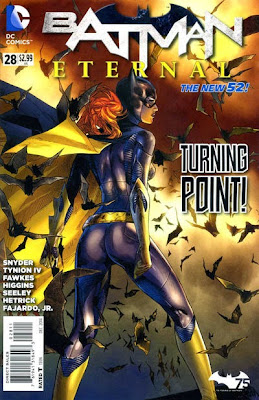 Batman Eternal #28 (DC Comics) The slug on the Clay Mann-drawn cover reads "TURNING POINT!" and it features an image of Batgirl Barbara Gordon turning away from the reader, her cape flapping in the wind so we can get a good view of her butt and also her terrible, terrible New 52 costume, with all it's joints and armor and ribbing. I wonder when her new, not terrible costume will show up in Batman Eternal, or if it will at all. It seems like some of the newer Batman series that will launch in the future—Arkham Manor, Gotham After Midnight—will spin rather directly out of the events of Batman Eternal and may, in fact, be set after Eternal concludes. Perhaps that's the case with the new Batgirl and the upcoming new direction for Catwoman, too.

I don't know if "Turning Point" is the best description of the events of this issue, scripted by Tim Seeley from Scott Snyder and James Tynion IV's story (no consulting writers are credited within, but some of their names to appear on the cover), but the issue does contain several criss-crossing plot lines and some big decisions from at least a few of the players in the ongoing super-crime melodrama, decisions that could potentially change their places in the story.

The book opens in a Gotham neighborhood I used to spend the most time in, a neighborhood so rough that no one messed with it during the city's post-apocalpytic "No Man's Land" hellscape phase (the warning sign festooned with the skulls of vampires probably had something to do with that, though) and a neighborhood that I think is making it's New 52 debut here (But feel free to correct me if I'm wrong). That would, of course, be The Cauldron, home of Noonan's Sleazy Bar, where Tommy Monaghan and his fellow hitmen used to hang out in Hitman, still probably DC Comics' all-time best comic book series (Or, at the very least, Caleb's all-time favorite DC comic book series).

It's only in four panels—two exterior shots, two interior—and only appears as what Starfire refers to as Jason "The Red Hood" Todd's "favorite Gotham bar," where the red-helmet rocking anti-hero engages in a bar fight with a couple of unarmed, generic white guys. No sign of any of the Hitman cast, which is for the best. I appreciate the shout-out to Hitman, but honestly hope everyone not named Garth Ennis and John McCrea steer far, far away from those characters and storylines.

From there, The Red Helmet Hood goes to say his goodbyes to Batgirl, the implication being that they formed some form of romantic relationship, or at least mutual attraction, during their shared adventures of late, but it seems to have been only implied. That, or I missed an issue.

He finds her still forcing Commissioner Jason Bard into a series of nonconsensual bungee jumps, and tells her that's not the way she operates, it's the way he operates, so he tries to kill Bard. Batgirl saves him, but not before maybe eliciting from Bard an Oh shit I'm about to die! sense of regret for his heretofore evil actions.

In the other plotline, Batman let's The Flamingo go in order to track him, and he leads him to an invite-only criminal underworld event where some guy named Bone I've never heard of is planning to beat a captive Catwoman to death in front of an audience. At least that was his plan, until first Killer Croc and then Batman intervene.

Catwoman too seems to be heading toward her turning point, as she ultimately decides to do what we've known she was going to do since before the book started—take over as the kingpin queenpin of crime in Gohtam City, under the belief that better her than someone worse.

Artwork this month comes courtesy of Meghan Hetrick. Her figures and rendering are all fairly strong, but there were several panels I didn't think executed very well, like this one where Batman is getting ready to trail The Flamingo, from what looks like only about ten feet away... 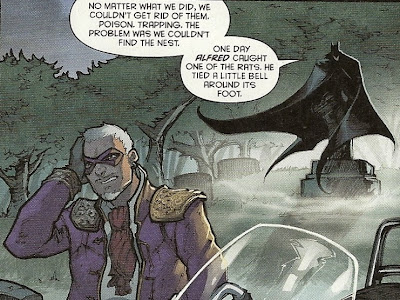 (Wow, Batman must be stealthy, if he can remain undetected from so close while talking out loud on the phone).

Or this panel, where I have no idea what Batman is holding or doing with his hands, exactly:

I don't think the execution of this sequence worked quite right, either: 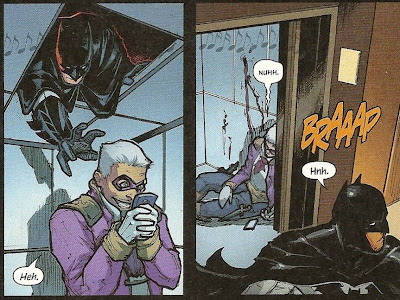 I know Batman didn't kill Flamingo, but just because I know Batman doesn't kill. That's a lot of blood to come out of a dude's head that you just wanted to knock out, isn't it? (Didn't Batman ever learn any nerve pinches or karate chops or anything?) I'm assuming the "Nuhh" is there to assure readers Batman did not just totally murder a guy.

No sign of Tim, Harper and the nanotech plot, or the haunted Arkham plot, the latter of which was sort of surprising, given that Arkham Manor, in which the Arkham inmates are moved into Wayne Manor, launches next week. 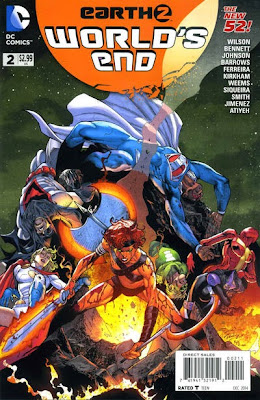 Earth 2: World's End #2 (DC) I thought this issue came with a rather huge drop in quality from that of the first issue. I think much of that had to do with the shorter page count, meaning the ever-changing art teams didn't hang around long enough to make their abrupt changes less obvious, and much of it had to do with the fact that the plotline didn't move very far from The Motley Superheroes of Earth 2 Continue to Fight for the Survival of Their Ruined Planet Against the Forces of Apokolips.

That's what happened in, let's see, every issue ever of Earth 2, so this book has thus far simply just more of the same, more often. Only much more poorly drawn than usual.

I wrote a bit about the nature of this series at Robot 6 this week, and I think I'm likely going to end up maybe reading the book in library-borrowed trade, should it get more interesting as time goes on.

By the way, I'm not sure what the fuck is going on with this stoner-humor ad for an upcoming special issue of Harley Quinn, and why it's appearing in T for Teen-rated books: 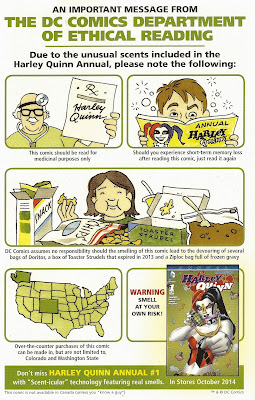 I've heard that one of the scents in the Scratch 'n Sniff Rub 'n Smell special will be that of marijuana, but man, that is one weird way to market the book. Particularly since it already outsells pretty much everything else DC publishes; does it need ads in the lower-selling books...? 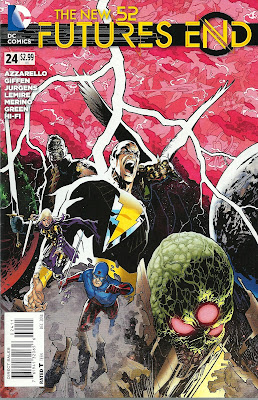 The New 52: Futures End #24 (DC) Hey, check out the background of the cover. Look closely, and you'll see the/a Legion of Superheroes, Wonder Woman in her invisible jet and characters like Hawkman, The Flash, Kid Flash, Captain Marvel, Wonder Girl Donna Troy and Cyborg in old-school, pre-reboot costumes. I think cover artist Ryan Sook is using the red to represent The Bleed, the area between universes that the Stormwatch Carrier ship travels throuhg. The foreground shows what looks like it's shaping up to the be the new version of Stormwatch—Frankenstein, Hawkman, Black Adam, Amethyst, The Atom—versus the big-ass Brainiac monster.

Rather randomly, Mister Miracle and Fury, both Earth 2 refugees that were until recently interred on Cadmus Island and presumably under the control of Brother Eye, are given five pages. This is mainly random because they have only just barely-appeared in the series at all up until this point, and it is the 24th issue of the series (25th, counting the #0 issue).

Attention is also spent on Maddy's developing relationship with Ron Raymond, and Tim Drake's stalking of the former, Jason Rusch's work with a crazy doctor on teleportation device and John Constantine and company, who are confronted with the Parasite-looking robot, which shirtless, bearded Superman arrives in time to punch—but not in time to save one of Constantine's running crew from getting his chest somehow exploded from behind.

Stupid Superman; if only he was as fast as a speeding bullet or something, he might have been there in time to save the poor guy.

Jesus Merino draws this issue, and Dan Green inks it. It looks better than average. 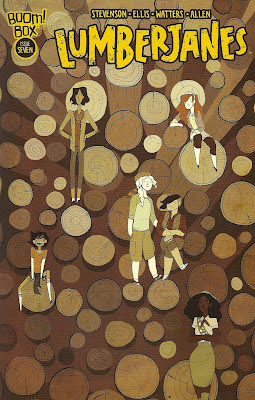 Lumberjanes #7 (Boom Studios) Finally, a non-DC comic! An explain-much-of-the-weirdness issue (I think this was meant to be the penultimate issue, before Lumberjanes was upgraded from limited series to ongoing), the book finds the girls joining forces with Jen and Diana to steal, or maybe just borrow, an artifact from Rosie and taking it to a special tower full of challenges and traps that they had already defeated without knowing what they were doing.

Diana explains what they are really doing, and why they've been beset by strange, three-eyed creatures and mind-controlled boys in the earlier issues. It makes sense, given all the clues we've been given so far, but the Classical, Mediterranean mythology seems rather wildly out-of-place in the North American wilderness setting of Lumberjanes. I guess we'll see how much of the info dump proves to be true—at least one of the characters has her suspicions—and how it plays out.

Artist Brooke Allen does her normal excellent job of drawing everything, especially during a passage where Greek mythology is discussed (and the background gives way to Classical, vase-style art) and in a battle scene against giant lightning bugs, which can shock the girls the same way lightning can (and whose antenna are shaped like zig-zagging cartoon lightning bolts). 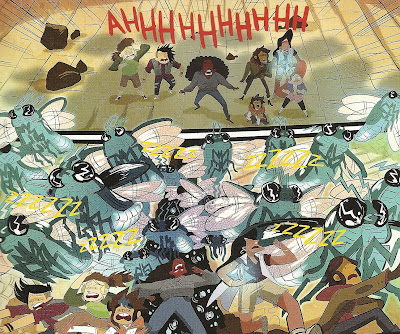 Those are some mighty fine lightning bugs.
Posted by Caleb at 6:50 PM

I have been waiting for Batman Eternal #28 ever since I read Jason Bard's Wikipedia entry. It states that the versions of Bard in earlier continuities had an injured leg and walked with a cane.

It's been like all of Crispin Glover's appearances in "Hot Tub Time Machine" where you were always waiting for his arm to get cut off. I've been waiting and waiting for Bard's leg to get injured. Jason Todd finally put the wait to an end.

Would you care to do a post about the teaser image DC released a year ago, hinting at events in Batman Eternal and the related titles?

At the first glance, it seems to foreshadow Gordon's incarceration, the first appearances of Spoiler and Alfred's daughter etc.