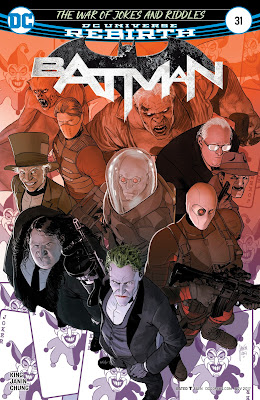 Batman #31 (DC Comics) In this issue, The Joker is in the middle of murdering someone in his secret headquarters, which the World's Greatest Detective has discovered the location of in his usual method: Kite Man told him where it was. Rather than acting to save the murder victim, Batman instead rallies with his new team of mass-murderers and terrorists--Mr. Zsasz, The Scarecrow, Two-Face, etc--and storms The Joker's headquarters via hang-gliders.

He finally makes a move to capture some of his many, many villains, taking out the majority of Team Riddler in one fell swoop, and the otherwise uneventful issue ends with The Joker, The Riddler and Batman all alone and in the same room.

As with most of the previous chapters of "The War of Jokes & Riddles," the issue is technically well-made, but the characterization is as off as any Batman story I've ever read without an "Elseworlds" logo stamped on the front.

As usual, the Tim Sale variant is so damn good it's a shame it's not the actual cover and, at this point, I'm long-past wishing I had just trade-waited Batman so I could get those Sale covers in the back of each volume: 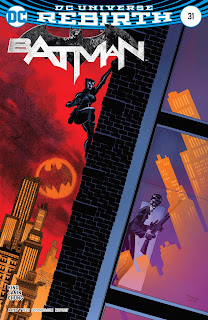 The particular designs on Sale's cover don't quite match up with the interior art by Mikel Janin--Catwoman is wearing a version of her purple, Jim Balent costume in the interiors, and, of course, The Joker has stopped smiling--but it is otherwise a more accurate representation of the contents of the comic, as none of those characters depicted on the above cover even appear in the comic, save The Joker. 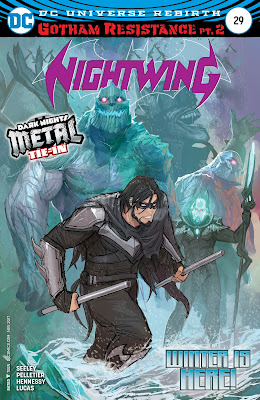 Nightwing #29 (DC) This is part two of the Dark Nights: Metal tie-in story, "Gotham Resistance." I guess part one came out last week, and was in an issue of Teen Titans, which I don't read. I kind of hate crossover stories of this nature, in which each chapter appears in a different book, as it generally means you either have to read all the books, or skip an issue you regularly read, or just try to muddle through (if I were just buying Nightwing off the rack, I likely would have just skipped the issue, but since it's on my pull-list I felt obligated to buy it).

To regular Nightwing writer Tim Seeley's credit, this issue was pretty easy to follow, with participating characters--the Teen Titans, The Suicide Squad, Green Arrow--all rather organically catching a reader up to what's brought them all together in Gotham City at this particular point. Essentially they are there to deal with the sorts of craziness that happens whenever there's this sort of world-threatening, cosmic order-altering crisis.

Apparently The Batman Who Laughs, the dark multiverse version of Batman who seems to be an amalgam of Batman and The Joker, recruits and empowers Mister Freeze, and so Nightwing, Robin, Killer Croc, Harley Quinn and Green Arrow battle their way through ice giants and wintery weather in order to beat Freeze to a cache of Nth metal weapons. This allows everyone to armor up and dress slightly differently; Nightwing's costume on the cover though is apparently a special cold-weather outfit he stopped at the Batcave to suit up in.

There are some plot points here that refer to the goings-on of Metal and previous Nightwing and Batman arcs, but for the most part it's just a bunch of characters wandering through a radically altered Gotham City, fighting and exchanging dialogue. So the muddling through works just fine.

Seeley is joined by guest penciler Paul Pelletier and inker Andrew Hennessy. Pelletier is and always has been a hell of a superhero artist, and this looks great, which no doubt goes a rather long way in helping make sense of it having skipped the first chapter. It is, after all, more difficult to get frustrated with a good-looking comic than it is a bad-looking comic. 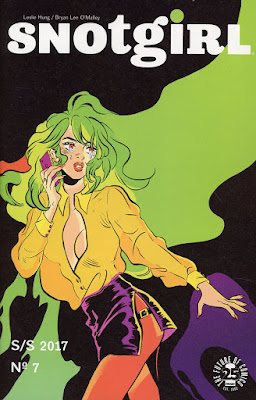 Snotgirl #7 (Image Comics) The latest issue of Leslie Hung and Bryan Lee O'Malley's weird soap opera involving millennial fashion bloggers seemed like a particularly full one, featuring 26-pages of story and zero ads, not even one for the first Snotgirl collection, which you should totally buy and read (I'm actually kinda curious how it reads in trade, but it's one of those things I'll never really know, because even if I did read it in trade, I would have already read it serially, and so really I would be re-reading it in trade rather than reading it in trade.

Lottie tries to integrate Cool Girl into her circle of friends (or should that be "friends"...?), The Hater's Club, and they're off to a very, very rocky start. Meanwhile, the mysterious incident from the very first issue may not be in the past after all, as several other characters are circling around it. And, of course, there's another possible kinda sorta crime, or at least something that looks awfully crime-like, that Lottie may or may not be attached to. Fun stuff, for the seventh issue in a row now. 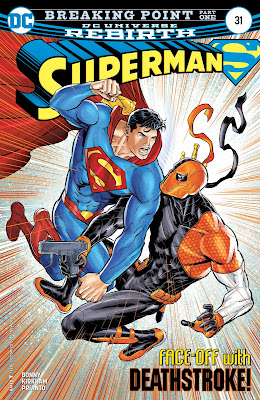 Superman #31 (DC) Fun fact: Superman isn't on my current pull-list because I want to to read 20-pages of Superman comics at $2.99 a pop every two weeks. I mean if "Superman comics, any Superman comics" were what I was interested in, well, there are hundreds and hundreds of issues of Superman comics I've never read before, many of which are created by masters of the form, and are available in more convenient formats than floppy comic books, and most of those I can get and read for free from my local library.

No, the reason Superman is on my current pull-list is I want to read Peter Tomasi and Patrick Gleason's Superman comics (with Gleason trading pencil duties off with Doug Mahnke and maybe an occasional fill-in artist).

This issue is the third in a row that is not by the "regular" creative team of Tomasi and Gleason, and the fourth out of the last six issues in which they did not participate.

It was solicited as the start of an (admittedly kinda dumb-sounding) arc involving Lex Luthor and Apokolips, which sounds like a follow-up to Geoff Johns' last Justice League arc, "The Darkseid War" (Interestingly, Wonder Woman is also picking up on that pre-Rebirth, year+-old story arc this month too). Instead, it is the first chapter of a multi-part storyline in which Lois Lane pursues an interview with Deathstroke (and has apparently been in the drawer a bit, as it doesn't exactly line up with what's been going on in the pages of Deathstroke for a while now).

It follows a two-part Keith Champagne-written Superman vs. Sinestro storyline drawn by Mahnke and at least three other pencil artists (a storyline that was originally solicited to be by Tomasi, Gleason and Champagne, but didn't show up in shops that way), and that followed a two-parter by the regular writers and a guest artist (that weird American history story that was...well, weird), and  before that was another fill-in issue by another creative team entirely.

I guess I'm going to drop Superman; I can always catch up in trade later.
Posted by Caleb at 12:39 PM

I've enjoyed the Metal stuff, so far. But it reminds me a lot of Underworld Unleashed, when Her in kept camping up the bad guys.

Neron, not her (silly spellcheck)

Perhaps an odd question, being as I’m not currently reading it, but — since The War of Jokes and Riddles is a story being told by Batman to Catwoman — could some of the odd characterization actually end up being deliberate in terms of an unreliable narrator (perhaps even gauging Selina’s reaction to Bruce’s alleged actions being described here)?

Brian, in theory yes, but Bataman is generally making himself look worse rather than better, and while his narration if the frame for the story, we readers are seeing a lot of scenes without Batman and which therefore aren't really from his POV, but a more omniscient one.

The characterization issues are mostly just really broad ones, though. Why is The Riddler such Joker-like in his nihilistic disdain for human life, why is The Joker working so well with others, why isn't Batman capturing anyone (before this issue, I think he only actually stopped two villains), why would Batman work with people with body counts in the hundreds, why would he join Team Riddler instead of just call Superman and the Justice League, stuff like that.

The three main players don't feel like themselves at all, and while that's fine for The Joker, given what Morrison and Snyder have been doing with him--and he's having some sort of existential crisis in this storyline anyway--but feels really, really off when Batman and The Riddler similar don't seem like themselves.