On Heroes in Crisis #1 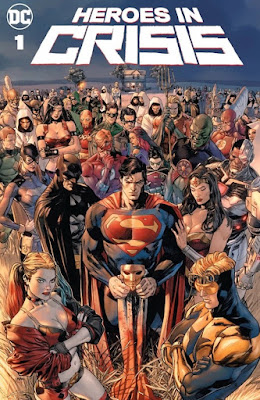 
*DC has been promoting this book with a kind of crass image featuring a half-dozen heroes posed above the words "...In 21 Days, One of These Characters Dies!" Based on the characters in the image, it is immediately apparent which one of the six is going to do the dying; it's got to be the completely expendable one, the one not starring or co-starring in a book right now, the one unlikely to show up in any future DC movies, and the one whose continued use in the current rebooted continuity is never going to not be problematic.

And thatcharacter does die in this issue...or, at least, his body is found in this issue, and Superman stands above it, saying he's "confirmed."

What the "In 21 Days" image didn't tease, however, is that the one character among the six potential victims shown is but one of six confirmed dead in this issue (the other five in the image are fine; it's five other, never-teased characters who die). One of the characters who dies is actually probably an even bigger deal, historically, than the one that was teased, but he's also pretty expendable for the same reasons. That second character has been so intricately tied to all the various continuity/Multiverse shenanigans we've seen since DC Universe: Rebirth, however, that I wonder if he's really dead, or if his corpse appearing on the floor in this issue is the surest sign yet that a reboot or de-reboot is in the offing.

The other four dead superheroes are all extremely minor ones, and their usage as what is essentially cannon fodder is particularly frustrating because of how minor they are. None of them have appeared in any DC Comics since Flashpoint ushered in The New 52, so this is essentially the first appearance for each of them--as corpses at the beginning of a murder mystery. Two of these four dead people get spoken lines, the other two are just bodies (Maybe they will get lines in flashbacks next issue).

And these characters are so obscure that new readers won't recognize them at all, so the only people who are going to notice them and/or care whether they live or die will be people who like them a lot and don't want to see them introduced just to be killed off (and their creators, of course).

Writer Tom King and/or artist Clay Mann could have created four brand-new characters that would have served the exact same purpose--that is, of adding super-people to the killer's body count--without subtracting IP from the DC Universe and/or risking offending the world's biggest Lagoon Boy fan.


*This callous killing off of minor characters in a Tom King-written comic was particularly surprising to me, given how much mileage King has gotten out of Kite-Man (Kite-Man is even on the cover of this issue!). King obviously likes and sees the potential in extremely minor, footnote-like characters.


*The art is great. This is some all-around stellar work by Clay Mann, who is here colored by Tomeu Morey.


*There is apparently a diner in Nebraska that doesn't include the standard butter knife along with the fork and spoon in their utensils, but instead gives one a razor sharp knife that can be used to quite easily stab people with. I guess the pie crust there is really fucking tough? Additionally, and related, Booster Gold's suit doesn't currently have a force field generator built into it, which is awfully unfortunate, because it shouldn't really be so easy to fuck up a guy with a 30th Century super-suit with cutlery. 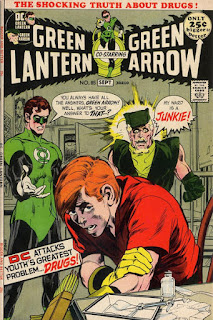 *Arsenal Roy Harper, who was formerly Green Arrow's sidekick Speedy and a founding Teen Titan, has long been defined by that one story in which he was addicted to drugs. The idea here in Heroes In Crisis is that he got hooked in the current continuity after he started taking opiate-based pain killers to treat aspects of the superhero-related wear and tear to his body is kind of interesting.

That said, linking the character so directly to the very current and very serious opiate epidemic in the real world seems somewhat forced. Like King wanted to add relevancy to the story, and worked backwards from that desire to find a DC superhero with a drug problem to attach to the idea. It would probably have worked better with a new character, and someone far older. DC's timeline is all fucked up now, but Roy should be in his early twenties at the absolute oldest now, having not started his superhero career until his mid-teens, and only about seven years having passed since then. Having not read any of his Scott Lobdell-written adventures, I don't know if Roy ever suffered a serious injury that lead him to seek out pain killers, but he isn't a great candidate for needing them for repetitive motion injuries or from being punched, kicked and falling on a daily basis...certainly not when compared to, say, Green Arrow or Batman.


*The plot is this. Apparently sometime in the past, the Trinity got together and built some sort of clinic to help superheroes deal with stress and other mental health issues related to a career in superheroics. It was called Sanctuary, not to be confused with The Secret Sanctuary, and it was staffed by Kryptonian androids infused with the will of Batman, the compassion of Wonder Woman and the honor of Superman. They gave these androids white robes and hoods and expressionless gold masks that look like the sorts of things that some of their super-villians might wear (I've been to various therapists over the years to deal with my anxiety disorder, but if I ever went to one dressed like the leader of a murder cult, I don't think I would have gone back for a second visit).

Just before the first issue began, something terrible just happened at Sanctuary, littering it inside and out with broken robots and the bodies of a half-dozen name superheroes, at least one of whom would be among the hardest superheroes to kill in the DC or any superhero universe (the means of the killings aren't revealed, nor are there any clues; we just see dead bodies, with some blood here and there). Sometime after whatever happened happened, the Trinity all rush to the scene of the crime to investigate. Meanwhile, Booster Gold goes to a diner. He is followed by Harley Quinn. She attacks him and they fight. He says he saw her kill all those people. She says she saw him kill all those people.

Interspersed between these two simultaneous threads are pages with nine-panel grids, each featuring a character shown from the chest up, presumably talking to a super-therapist robot. These are Booster Gold, Harley Quinn and three of the six dead heroes.


*Of those six, four of them are on the cover, but you'll have to look pretty closely to find some of them. One of them I noticed when the cover was first solicited and wondered who exactly he was supposed to be, as the coloring on the cover renders his most identifiable feature hard to see.


*Heroes In Crisis is kind of a terrible title, isn't it? I know they probably wanted to get the word "crisis" in there somewhere because that's a special word in DC's history of crossover stories, but I'm still surprised they didn't use something more obvious like Sanctuary or No Sanctuary...
Posted by Caleb at 9:26 AM

Well, that's one way to find out about Norm. I have cerebral palsy and we talked on FB after he had his stroke.

To what this post is about, I almost thought Superman was holding Psycho-Pirates mask. And I couldn't understand the fight between Harley and Booster at all, or why either was in Nebraska. I also read DOOMSDAY CLOCK#7 and it took me three times as long to read. I really did like the art by Clay Mann.

I'm old enough to remember that LEGENDS, which followed COIE, was originally going to be titled CRISIS IN FAITH. DC keeps using that as a default.

The thing with Speedy highlights the thing I really dislike about Tom King's writing. He tends to change characters to fit the story he wants to tell, rather than adapt a story to fit the characters. When I read a Tom King comic it doesn't feel like the continuing story of my favorite characters, it feels like an Elseworlds story that took a dark turn.

He doesn't even have regard for recent characterization. He wanted "Batpoint," so Booster Gold makes a stupid attempt to change history, even though only a few months earlier in Action Comics, Booster was lecturing Superman on how important not changing history was. He wanted Batman to become obsessed with mortality and legacy even though Scott Snyder had just finished a run where Batman had a firmly established legacy that would carry on after his death.

Maybe I'll borrow "Heroes in Crisis" from the library just so I can properly understand the damage it's about to do.

And You Thought Identity Crisis Made No Sense!