Compare and contrast these pages from 1987's Shazam: The New Beginning and 2012's "Shazam!" 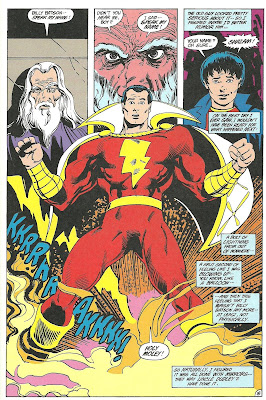 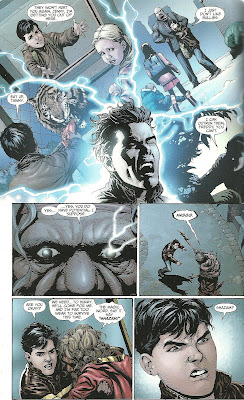 BLACK ADAM RETURNS TO THE PRESENT, MEETS SIVANA AND HOLDS HIM ALOFT BY HIS COLLAR: 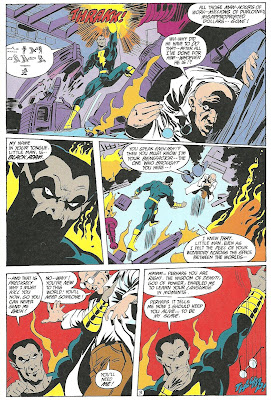 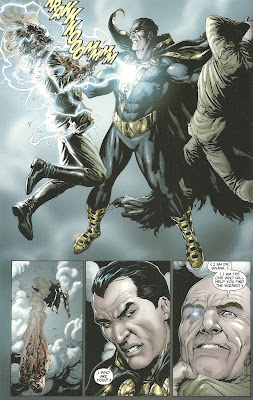 BLACK ADAM FLIES SIVANA TO THE TOP OF A HIGH STRUCTURE SO THEY CAN DISCUSS THEIR ALLIANCE: 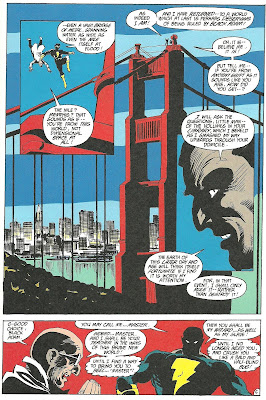 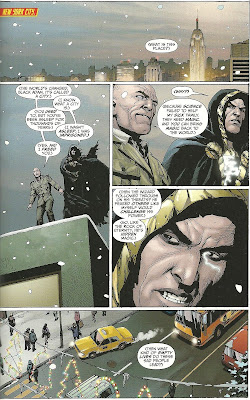 In 1987, DC Comics had writer Roy Thomas reintroduce C.C. Beck and Bill Parker's Golden Age superhero Captain Marvel to their DC Universe shared setting. This followed the 1986-1987 Crisis On Infinite Earths limited series, in which that shared setting was refreshed and recreated, with older characters being reinvented for more modern times. Thomas and co-writer Dann Thomas wrote the four-issue Shazam: The New Beginning, which was penciled and inked by Tom Mandrake and colored by Joe Orlando. In 2017 it was collected along with another Thomas-written story from the era and re-released in a hardcover format as Shazam: The New Beginning 30th Anniversary Deluxe Edition.

In 2012, DC Comics had writer Geoff Johns reintroduce Captain Marvel, now re-named "Shazam," to their DC Universe shared setting. This followed the 2011 Flashpoint miniseries, in which that shared setting was rebooted and recreated, with classic characters being reinvented for more modern times and introduced to readers as if for the very first time. Johns wrote a "Shazam" strip as a back-up in his Justice League ongoing series. It was penciled and inked by Gary Frank and colored by Brad Anderson. It was later collected into a trade paperback under the title Shazam Vol. 1 and, later, republished as Shazam: Origins. It was the basis of the 2019 film.

Interestingly, in rather broad strokes, the two miniseries, which had identical mandates, resembled one another in terms of their plots. In both, scientist Dr. Sivana frees the Wizard Shazam's first champion, Black Adam, from his centuries-old imprisonment and the two villains become allies. Meanwhile, orphan Billy Batson is given a magical word by the wizard in order to transform himself into a superhero. Both stories even end with the teasing introduction of another of Captain Marvel's most colorful villains, Mr. Mind.

Despite the similarities of the broad shape of the two Captain Marvel reintroductions, they differ quite a bit in the details (Thomas' story posited Sivana as Billy's uncle, and included versions of the pre-existent characters Uncle Dudley, Magnificus and Beautia and even Hoppy, The Marvel Bunny; Johns', meanwhile, included versions of Mary Marvel, Captain Marvel Jr., Mr. Tawky Tawny and Ibac...plus three new "lieutenant" Marvels).

Still, I was struck by the degree to which certain scenes in the Johns/Frank comic so strongly echoed scenes from the Thomas/Mandrake take. Obviously, Johns and Frank drew inspiration from their predecessors, even as their Captain Marvel/Shazam story was quite different in tone, emphasis and in so many of the particulars.
Posted by Caleb at 2:34 PM