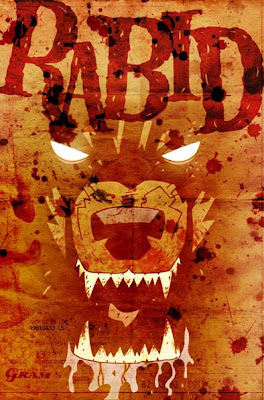 I don’t necessarily mean that as a value judgment, since there are good movies as well as bad movies, but the last few years have seen a sharp increase in comics that read like rejected screenplays illustrated by comics artists, or auditions for film adaptations.

The Rabid is an example of the former—it’s very easy to imagine that prolific writer Jason M. Burns began this project as an on spec screenplay, as it’s structured as a C-movie horror project, something that might get released in January or February, covering every single cliché of the zombiepocalypse genre and even ending with an “Oh no the menace isn’t over after all!” shock scene. I half expected the credits to roll when I finished the comic.

As unimaginative as this particular comic might be, Burns is actually something of a minor master of the high-concept pitch. His other comics include a ventriloquist/ventriloquist’s dummy buddy cop team, an underground railroad that ushers dead folks into the next world before the devil can get them, and others I’d need too long to explain. The comics aren’t always that hot (I loved Dummy Guide’s To Danger, but had to struggle through Underground Railroad, and couldn’t even make it through The Expendable One), but the ideas tend to be big ones.

The concept here isn’t quite so high. There’s this 28 Days Later-like virus that turns people into cannibals who, for all intents and purposes, are zombies, even if they’re not technically undead (You wouldn’t believe how many arguments I’ve had over whether or not 28 Days Later is a zombie movie or not, based on that distinction). Dogs get the zombie disease in The Rabid through the air, but transmit it to humans through their saliva, and humans pass it on by biting other humans.

So when it breaks out in a small town, pet dogs start going bonkers and biting their masters, and then they start turning on each other. The town’s sheriff, his family, his two fellow officers and a couple of other characters from central casting make their way to the police station, try to hold off a siege of the infected, and then try to make a break for it.

The expected action, gore, violence, interpersonal conflict, quip-heavy Hollywood banter and occasional bursts of horror humor (like a little fluffy dog getting batted down with a frying pan) ensues.

The thing is, Burns nails all these clichés so, as rote an exercise as it is, it’s hardly a failure. The bar is so low it’s laying on the ground, but he hops over it gracefully enough.

The art is provided by Guy Lemay, and here The Rabid really separates itself from the pack of wannabe/wanted-to-be movie comics. Lemay eschews the typical style for such projects, boasting a Paul Grist-like flat, semi-abstracted, square-filled style that subverts the script’s Hollywood pastiche nicely, essentially comic book-ing the thing up as much as humanly possible.