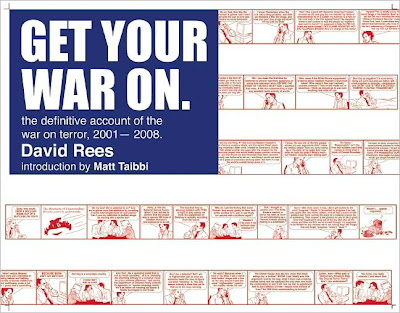 When I saw the new Get Your War On collection, the one shaped like an American flag, had the phrase "the definitive account of the war on terror, 2001-2008" on the cover, I assumed that was just some of author David Rees' humorous hyperbole. Rees is, after all, quite enamored of hyperbole, as his rather uncomfortable blog demonstrates on a pretty much daily basis.

But then I sat down and read it. Or re-read it actually, since I had read almost every one of these strips as they originally appeared online, and I realized that even if there is some sarcasm in the boastful "definitive account" subtitle, I'm certainly hard-pressed to think of a better account of the last seven years of the "War on Terror." (Or should that be "war" on "terror"...?)

As I reread these, I was reliving every horrible, hilarious, infuriating, unbelievable event of the Bush administration prosecution of the War (uppercase-W) and the wars (lowercase-w's) that it quickly devolved into. Reading these, I remembered where I was the first time I read them and where I was and what I was thinking when I read the news or watched the speech or interview that they were reacting to. It's seven-years of bad news, seven years of my life and your life and the nation's life, in 250 pages.

It's amazing to reread them at this point in history too, after the majority of the country finally—finally!—came around to seeing things Rees' way, and to look back at what he was writing back in 2001 and see how little has actually changed on some very important fronts. It was still fall of 2001 when his clip art cubicle-jockeys were howling about the fact that the United States couldn't seem to find Bin Laden, or catch whoever was mailing the anthrax, counting down the days until Bush went into Iraq for no reason and wondering after Vice President Dick Cheney's fear of light.

And you know what? Rees was right like, 95% of the time (One thing he got wrong was when one of his characters, shocked that eight weeks of bombing Afghanistan had yet to kill bin Laden, said that U.S. bombing raids must be like the elixir of eternal life, and that Saddam Hussein would therefore live to be 400-years-old). He was certainly more right more often than, say, The New York Times or NBC News or Newsweek or Time or Bob Woodward, and therefore deserves the right to put "definitive account" on his book more than just about anyone else who consistently commented on the war.

That said, something is lost by reading the book in this format, rather than the individual strips as they came out. Like after Bush's state of the union speech, in which he suddenly brought up doping in baseball as a major issue, the next day GYWO featured Black Guy and Standing Up White Guy with their shirts torn off revealing body builder bodies, and flexing their free hand while they talked on the phone. Without the context of having just heard the same speech, it's not all that funny, and it's a particular strip that may not age all that well say, for future generations. (Ditto the ones where Black Guy suddenly starts wearing a space helmet for a half-dozen strips or so, after Bush brought up prioritizing a mission to Mars for...some reason). I guess I'll reread this in 25 years and let you guys know how it holds up.

I was going to write an actual serious, considered review of the book in this post—the kind where I start the title of the post with the word "review" and a colon—but I honestly don't see much of a point. By December of 2008, you've either been reading Rees or you haven't, and I don't think there's anything I could say here that's going to encourage anyone who hasn't to give it a chance now. I honestly, 100-percent sincerely now, believe this strip is one of the most important and relevant documents of the last seven years of American history, and I don't have much else to add to that, beyond pointing to certain strips and saying, "Ha ha, remember this one? That one was funny."

So instead of a review-review, I offer my four favorite individual panels from strips: 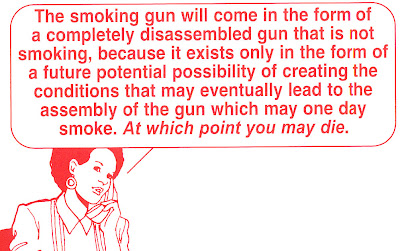 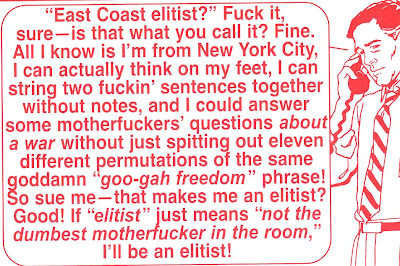 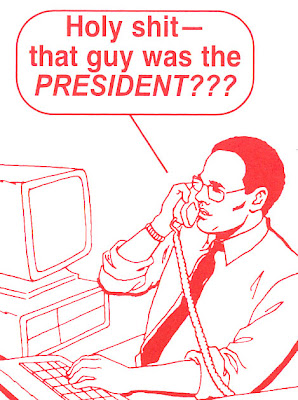 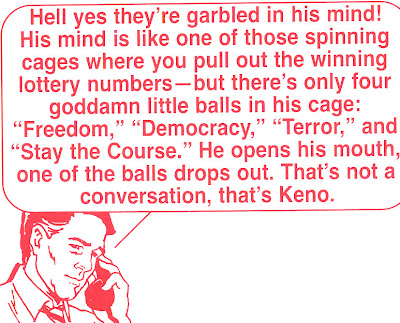 Not that the panels above are any funnier out of context than they are in, or that the strips they're part of themselves aren't funny. I just really, really like these panels, and I think they stand up all by themselves without even needing to be embedded in a strip.

The smoking gun panel isn't even the punchline panel in the October 2003 strip it's from (That one's "You mean die of boredom, waiting for a goddam real smoking gun?"), it's simply the middle of a three-panel strip. And there's the argument for the Iraq War, as sold by the administration and re-sold by the entire mainstream media in one simple sentence.

The third one down, "Holy shit— that guy was the PRESIDENT???" is probably the greatest single encapsulation of President Bush's overall performance I've ever seen. It's from a February 2004 strip, one that came right after Bush gave an interview to the late, great Tim Russert (who softball-ed the hell out of him). Again, that's not even the punchline...it's simply the second of a four-panel conversation. (The very next panel? "You got it. Remember Abraham Lincoln? This guy has the same job.")

Likewise, the two panels featuring Standing Up White Guy also refer to Bush; the definition of "elitist" offered in the second panel is one that's stuck with me ever since I read that strip. I've never understood how exactly "elitist" came to be an insult in politics. We saw it in this just-ended presidential campaign, where Obama being perceived as an elitist was supposed to be a bad thing; call me crazy, but I kind of thing the most powerful man in the United States government, one of—if not the—most powerful men in the world should be something of an elite.

Finally, and perhaps a little more timely, here's the final panel of a three-panel strip from way back in April of 2006, which I offer only as an example of Rees' predictive prowess: 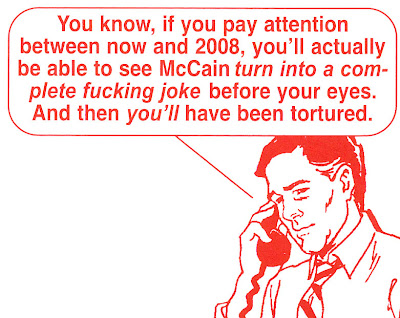 The strip was responding to McCain giving a speech at Jerry Falwell's college, despite having called Falwell and his ilk "agents of intolerance" in 2000. This was one of the first big zigs in McCain's two-year march to losing the White House, during which he constantly strove to de-maverickify himself and return to his pre-2000 conservative roots. The previous panel was the black guy saying "Someone should ask Mcain if he agrees with Falwell that 9/11 was caused by teh ACLU and lesbians. Because if he does, he'll have to support bombing Lilith Fair."

Anyway, here we are two and a half years later, and what's become of McCain since then? Why he's turned into a complete fucking joke. David Rees wins again!
Posted by Caleb at 7:30 PM

I think that somewhere along the way, the word elite became synonymous with elitist. The two are not the same.
Delta Force are certainly elite, but I doubt that many of them are elitists.

The elitist one is my favorite. How does simply being competent translate to being uppity? Possibly because NO ONE in the Bush administration IS competent.

My favorite strip is one I read many years ago, when the guy was ranting about 9/11 and how he's so exhausted from all the crap and the woman he's talking to says, "You know what I'm sick of? I'm sick of my cousin being dead." It's funny and tragic and sums up the situation perfectly.

I'll have to check out this book, even if, as you say, some of the references might be dated.

I think that somewhere along the way, the word elite became synonymous with elitist. The two are not the same.
Delta Force are certainly elite, but I doubt that many of them are elitists.

That's a good point. The strip I took that panel from featured one of the characters calling the other an "East coast elitist" for making fun of Bush's ranch, and I guess in that context "elitist" is a negative thing.

In this past election, folks were sorta slurring Obama by calling him elitist, which strikes me as silly. Of course Obama--and everyone who runs for president--is elitist. You have to be to think "Hey, you know who's most qualified to run this country? Me."


I'll have to check out this book, even if, as you say, some of the references might be dated.

Oh I hope that didn't come out wrong. I don't think it's dated-dated; some of the effectiveness is blunted the way any sort of political cartoon is the further you get from the event its reacting to, if that makes sense.

Hey, you know who's most qualified to run this country? Me."

Sure, it's utterly nonsensical, but that was the lynchpin of Bush's appeal; people supposedly wanted to have a beer with him. Next time you're at a bar, look at the goofballs on either side of you and ask yourself if you'd trust those assholes to water your plants, let alone trust them with the nuclear codes.

I think it was more like 10 years. I think you go a little crazy after all that.