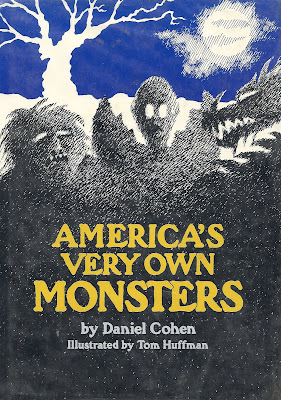 America's Very Own Monsters is a 1982 illustrated prose non-fiction book for young readers. It runs just 48 pages, devoting a few pages each to ten folkloric monsters who live, or whose stories are set, in the United States.

Mothman is, of course, one of these ten, and you can see artist Tom Huffman's depiction of him on the cover; that's him in the middle. Huffman's black and white art is quite moody, and fits the tone of the book quite well. Writer Daniel Cohen doesn't write much about each beast—he can't, really, given the audience and the small amount of space he has to work with—but Huffman tells a bit of their stories through his artwork, and, more importantly suggests possible stories for the creatures to star in, giving young readers enough clues to let their imaginations run wild with them.

I loved the artwork as an adult; I would have been fascinated and terrified by it as a child.

Each of Cohen's chapters is made up of short, topical paragraphs devoted to the highlights of each monster story's body of lore, told in short, declarative sentences.

Point Pleasant is a small town in West Virginia. Something scared a lot of people there. The "something" was about six feet tall. It looked like a man. But it had huge wings. It coulf fly at 100 miles an hour.


Cohen goes on to tell the story of the initial 1966 Scarberry/Mallette sighting and the dramatic Wamsley sighting at the Thomas house, in which the Mothman climbed onto the porch and peered through the window, but only vaguely, and the only witness named is Connie Carpenter. He also briefly explains the equivocal resolution of the flap of sightings: Some scientists thought it was a bird that people were simply misidentifying, some people thought it came from a UFO, but we'll probably never know for sure what it was.

Huffman draws two images of the Mothman. Each chapter opens with a small drawing above the title/monster name, and is followed by a larger, more dramatic image.

This is Huffman's drawing of the Mothman above the chapter heading: 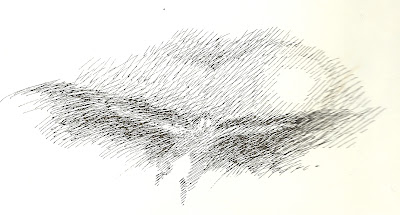 Regardless of how "accurate" it is, it's a very nice image. Note the way Huffman uses the sketchy little lines to suggest darkness or fogginess or simple blurriness. The image is indistinct, and the reason it's indistinct is itself indistinct. But it's nice-looking, and there's a suggestion of the moon and a shape that's vague enough that it could be a winged humanoid, or a large bird or even a giant moth. It might have arms, or it might just have wings of varying degrees of darkness. The eyes can't be seen at this angle.

Huffman gives the reader a clearer look at his Mothman in a spread on the following pages. Here is the right half of it: 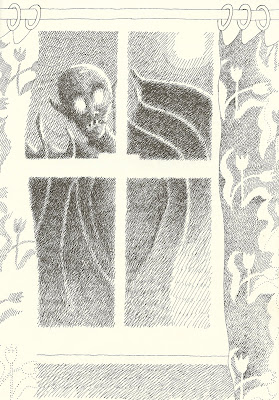 It's an even nicer image as it appears in the book, as the four paragraphs of prose are integrated into the image, appearing in the white space Huffman frames as the light coming from a lamp hanging from the ceiling in the inside of the Thomas home (here simply referred to with the words "a family"). We see a curtain rod, curtains and the walls, all rendered in the delicate crosshatching that makes up Huffman's illustrations.

As for his Mothman, well, it looks decidedly off-model, looking more like a bat-winged Nosferatu than the picture of Mothman that emerged from witness reports. Huffman's Mothman clearly has a humanoid head, a nose, a mouth, a chin, a neck and even ears and, as a result, doesn't seem quite as mind-bogglingly weird as the creature of indeterminate appearance that's usually reported.

I like how Huffman depicts the brightness of the eyes without the use of color though, the pure, line-less white the same as that he uses on the moon and the lamp-light on the opposite page: They must be shining with light, as everything else rendered in that manner is (save, perhaps, the window pane, although it is on the inside of the house, where the lights are on, rather than outside the house, where it's dark).

The simple juxtaposition of the dark, strange human-like creature with the mundane, domestic window and curtains, and the scant protection the latter offers from the former is a very effective scary image though, isn't it?

I didn't scan anything else from the book, but Huffman has a lot of fairly effective drawings in here. The small, above-the-heading images generally show equivocal evidence of the creature, and then the larger illustration shows it in all it's glory. So, for example, Bigfoot opens with a drawing of a footprint, and you turn the page and see a drawing of a huge hairy humanoid striding away from the reader and, on the next page, a close-up of Bigfoot's face. The chapter on Goatman opens with a drawing of graffiti on a brick wall reading "Gotaman was here," and the next image is that of a shadowy goatman holding a hatchet and charging into the bright, white-space headlights of an oncoming car.

In addition to Mothman, Goatman and Bigfoot, Cohen covers (and Huffman draws) The Skunk Ape, Washington's Demon Cat, The Flatwoods Monster (another really great illustration), The White River Monster, The Beast of Busco (that's the giant snapping turtle said to live in a lake in Churubusco, Indiana), The Thunderbird and Lake Champlain's Monster.
Posted by Caleb at 8:08 PM

Wow! Thanks for this post! I've been trying to track down this book for more than a decade. I probably borrowed it once a year from the Mary H. Weir Library in Weirton, W.Va. in the early '80s.

The first time I read it was during a lengthy pediatric hospital stay while I was being treated for chronic bronchitis. The illustration of the Mothman scared me so much I thought I'd wake in the middle of the night to see him at my 5th story window! After all, the Mothman stalked W.Va.! I've been fascinated by the lore and events ever since.

Now that I know the title, I can track down a copy!