By DC's recent standards, July looks like a pretty quite month—no big, surprise cancellations, no new titles starting (I didn't count; are they back up tot 52 New 52 books in the line yet?), no bizarre or suspect creative team changes beyond what was already announced.

The big news seems to be that "Trinity War" is finally starting, and rather than an event/miniseries along the lines of Flashpoint and Blackest Night, it's going to be a book-to-book crossover between the three Justice League titles, co-written by their authors Geoff Johns and Jeff Lemire. That oughta sell pretty well, given how well Justice League and JLoA have been doing for the publisher lately.

As always, you can see the full solicits at Comic Book Resources, which is where I ganked these from. 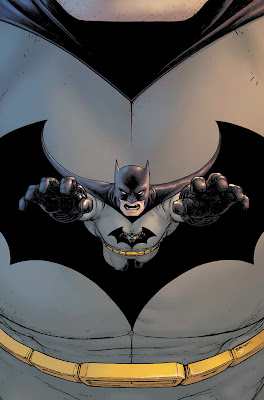 I really like this cover for Batman, Inc. I sure hope DC is able to find something worthwhile for Chris Burnham to draw once that title ends.

For one thing, comic books don't have directors, or really anything like a director (I suppose that would be the artist, and/or the writer, depending on the extent of their collaboration with putting the images on the page).

For another thing, they are never actually different "cuts" of the comic in question. Instead, this is just a reprint of a comic, apparently sans production elements like inking and coloring, with the script included.

If you're going to use a film analogy, it sounds like something akin to "behind the scenes" is more appropriate.

Another thing I hate? When different volumes of a comic book series are referred to as "seasons." 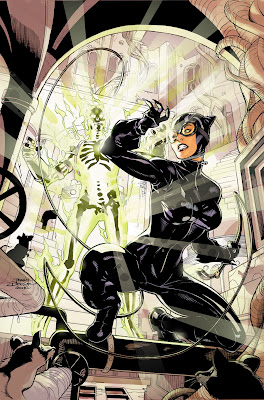 I wish New 52 Doctor Phosphorous wore a tattered white lab coat and one those thingees that looks like a CD on a headband, maybe a stethescope around his neck. 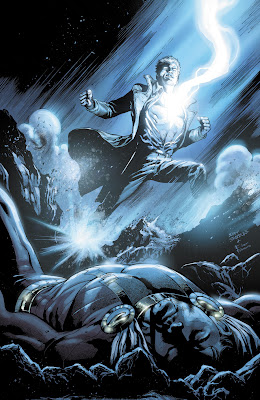 CONSTANTINE #5
Written by RAY FAWKES
Art and cover by RENATO GUEDES
On sale JULY 17 • 32 pg, FC, $2.99 US • RATED T+
As the TRINITY WAR rages around him, John Constantine takes a keen interest in Billy Batson’s power of Shazam! But does he want to mentor Billy or destroy him?

If they don't give Constantine a bright red trenchcoat when he's wielding the power of Shazam in this comic, then they've missed a wonderful opportunity. 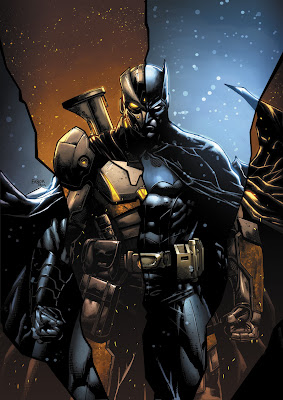 DETECTIVE COMICS #22
Written by JOHN LAYMAN
Art and cover by JASON FABOK
Backup story art by ANDY CLARKE
...
On sale JULY 3 • 40 pg, FC, $3.99 US • RATED T
...
Meet The Wrath! In Gotham City, he’s the anti-Batman, and the body count is about to shoot through the roof! And in the backup story, Man-Bat makes a startling discovery!

I'm trying to think of something less necessary than a New 52 version of The Wrath, and I'm coming up empty.

I see that, in keeping with the design aesthetics of The New 52, they took The Wrath's pretty shitty costume—basically Batman's, if you took out the bat stuff and replaced it with the letter W—and made it infinitely shittier.

Tony Bedard and Rags Morales did a pretty okay Wrath story in Batman Confidential (made better, I'm sure, by appearing in Batman Confidential, the comic that had the same remit as Legends of The Dark Knight, with the twist that most of the creative teams weren't very good and thus most of the stories were terrible). When DC reprinted that, they included the original 1984 Wrath story by Mike W. Bar and Michael Golden. I'm sure you could just by that trade, if you really want to read about The Wrath fighting Batman. 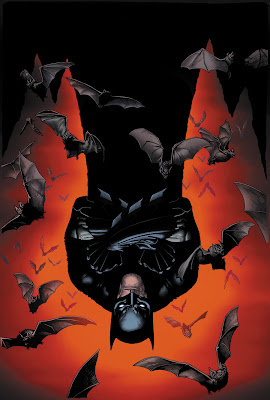 I always like the way Batman looks when he's hanging upside down like a bat, but it also bothers me deeply, as it makes me think about how he's keeping his cape from falling down around him exactly—my experience is thus one of a split-second thinking "cool" and then a split-second thinking about ways Batman could be keeping his cape up and then I get annoyed and stop thinking about it. 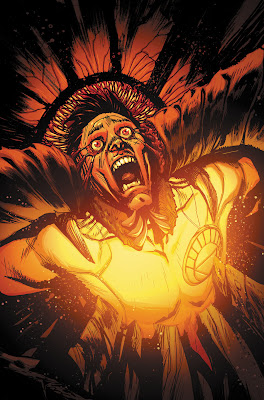 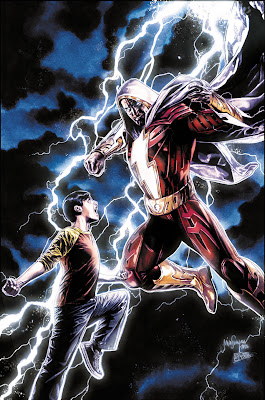 Wow. So as bad as The New 52 Captain Marvel redesign is, I guess it could have been a bit worse, as this cover to Injustice proves. 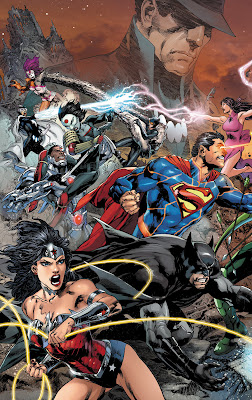 JUSTICE LEAGUE #22
Written by GEOFF JOHNS
Art and cover by IVAN REIS and JOE PRADO
...
On sale JULY 3 • 40 pg, FC, $3.99 US • RATED T
...
TRINITY WAR, the action-mystery event of the summer, begins with a full-length epic adventure! The death of a hero ignites a violent war among the Justice Leagues! It’s League vs. League vs. League as an impending darkness approaches the DC Universe. But the truth behind it all will lead to an evil that threatens every hero on the planet. And what does the Secret Society of Super-Villains have to with this? Everything.

Interesting that the so-called "Trinity War" event, which DC has been teasing to one extent or another since the launch of The New 52, sounds like it is a relatively small-scale event (six comics and a few tie-ins), but one that will be maybe leading up to something bigger. Odd that it seems to be of a much smaller scale than, say, the two Scott Snyder Batman line event/crossovers (That Owl business, "Death of the Family") or the Green Lantern line event/crossovers ("Rise of The Third Army," "Wrath of the First Lantern"), at least in the terms of the numbers of books and issues involved.

Naturally it begins with "the death of a hero," as everything always does, but a New 52 event beginning with the death of a hero seems a little odd in that the universe will only be 22 months old...is that enough time for nay hero to have outlived his usefulness? And who could it be? I don't see anyone noticeably absent from the covers of the participating titles (Just Hal Jordan. Are they gonna kill Hal Jordan? That would be unexpected. Or maybe this is where John Stewart was going to die, but they had to change the script so that, like, Hank Hall or OMAC or Captain Atom or Resurrection Man dies instead...?)

Yeah, maybe it' s Captain Atom...didn't DC's past solicits say that guy's book was kind of important for some reason...?

It might be funny of they introduced The New 52 version of Blue Beetle Ted Kord or Spoiler Stephanie Brown and then killed him or her off—all in the same issue!

I love that image of Batman on that cover. It looks like he is going to furiously hug the hell out of someone...! 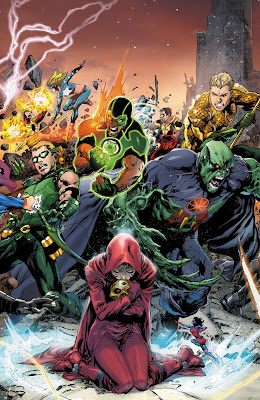 JUSTICE LEAGUE OF AMERICA #6
Written by GEOFF JOHNS and JEFF LEMIRE
Art by DOUG MAHNKE and CHRISTIAN ALAMY
Cover by IVAN REIS and JOE PRADO
...
On sale JULY 10 • 32 pg, FC, $3.99 US • RATED T
...
TRINITY WAR CHAPTER 2! The War of the Justice Leagues continues as one hero is arrested and another goes rogue. Who is responsible for the evil that has infected the League? And who is the true killer? Only the Question knows the answer...

So the Justice League titles participating in the "Trinity War" storyline all have inter-locking covers by Reis this month; apparently, the someone Batman was going to furious hug is...Pandora! And look at Martian Manhunter, he's just as furious about hugging...someone! We'll have to look at the Justice League Dark cover to find out who!

First is the presence of Doug Mahnke, who is a great choice for drawing comics with a Justice League in them, and just had his schedule open up with his run on Green Lantern concluding. Is he just a fill-in artist, though, or is he taking over for "ongoing" artist David Finch? Because this is only the sixth issue of JLoA, and if he is taking over, Finch sure didn't last long.

Second, either the price or the page count has gotta be a typo, right? Doesn't this book generally have a back-up, and thus a higher-than-32-page page count...? If the solicit is correct, than that's some Marvel-ass pricing right there. 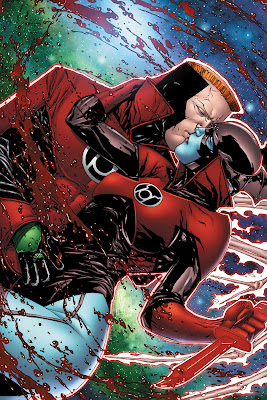 Ironically, this Red Lanterns cover is not gross enough. The Red Lanterns are constantly vomiting burning blood from their mouths. If two of 'em are kissing, shouldn't their be a little waterfall of blood vomit pouring out of their joined mouths, running all down their chins on onto their chests...? 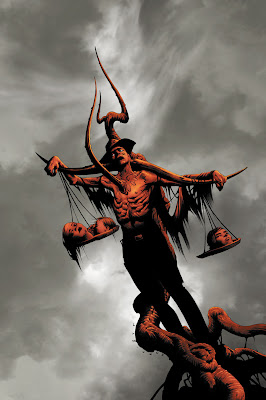 The idea of Guy kissing Bleez is horrifying enough! Sheesh!